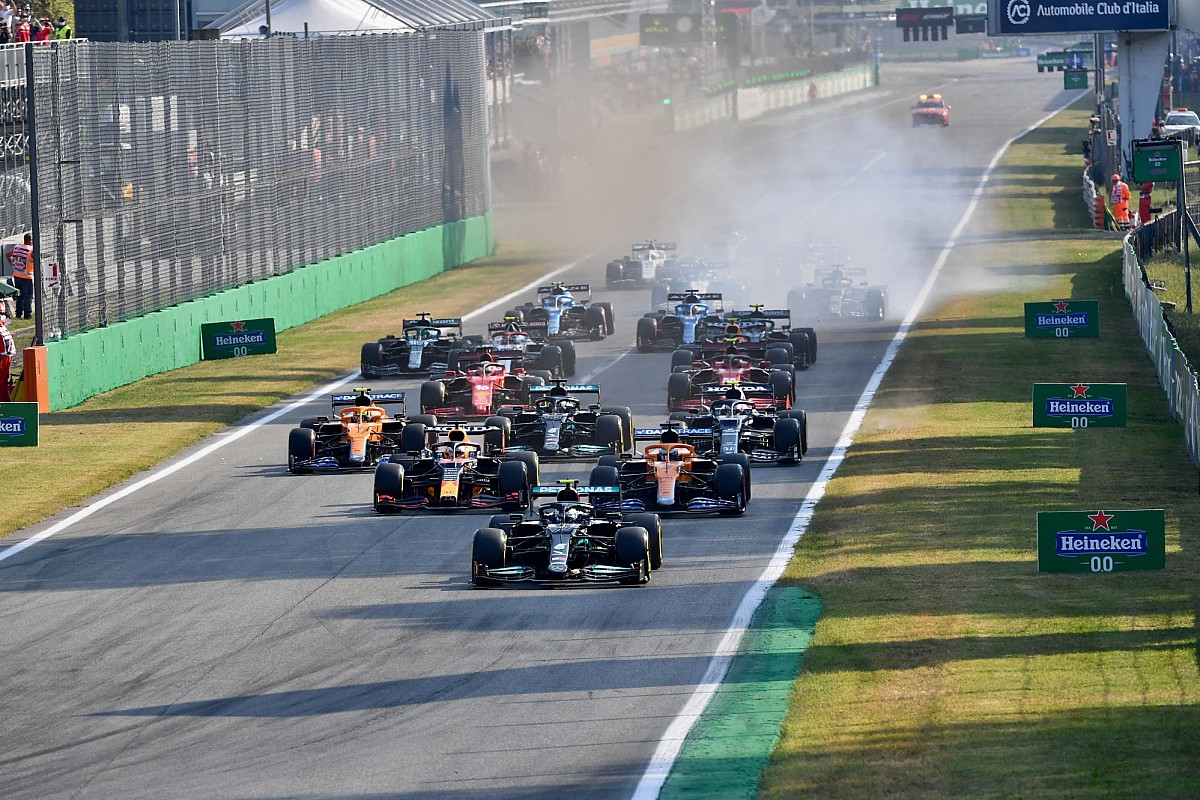 While lacking the novelty value of the first attempt at Silverstone, the weekend did see some intrigue generated by the Saturday event, with Lewis Hamilton dropping a couple of spots from his original grid position, and McLaren drivers Daniel Ricciardo and Lando Norris gaining one apiece.

F1 boss Ross Brawn has always said that the you can’t really judge the sprint in isolation, and have to see how the rest of the weekend unfolds.

We’ll never know how Sunday at Monza would have played out had the sprint not created that tweak to the grid for the main event. However the fact is that having made it to the front row Ricciardo jumped into the lead at the start, and subsequently we had an entertaining afternoon and ultimately a result that no one could have predicted a couple of days earlier.

Brawn has also always stressed that this is a three-event experiment, and we shouldn’t make a final judgement on the value of the current sprint format until we see what happens at Interlagos, a track where overtaking is relatively easy compared to Silverstone or Monza.

But has F1 already made up its mind? It’s certainly worth taking note when the likes of FIA president Jean Todt and Mercedes team principal Toto Wolff openly voice their doubts rather than following F1’s party line and saying we should wait for the third sample in Brazil.

Others have seen something positive in what we’ve experienced so far, and agree that we should wait for Interlagos. 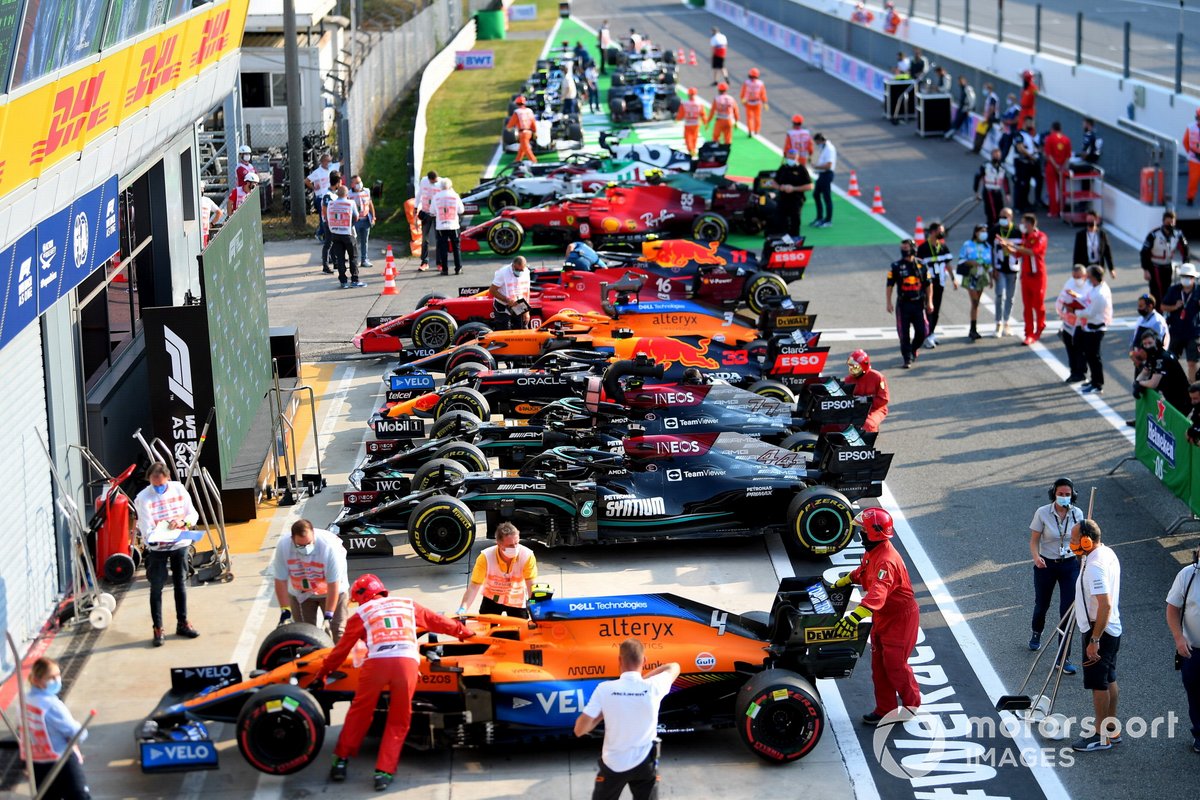 The cars in Parc Ferme after Sprint Qualifying

“I think we got to do what we set out to do, which is do three of them,” says McLaren CEO Zak Brown. “Learn, see what we think, what would we tweak, should they have pitstops, should they be longer, should that be shorter?

“I think we’ve got to let the three races go. And then take a view. I think Silverstone was very exciting. This one kind of mixed up the grid, was probably a little less exciting, so let’s see what happens in Brazil.”

“We’ve had two of these, let’s at least have three, and reflect on it over the winter,” added Alpine boss Marcin Budkowski. “I think there’s some good and bad things. I think the good thing for me is mostly that over three days there’s something happening that is meaningful, whether it’s a qualifying session or a race.

“Every time you put cars on the track either trying to qualify or to race each other there’s a good story, there’s something happening. Not every race is spectacular, not every sprint will be spectacular.

“There was a little bit of action [in the sprint] for two laps, and then it was nothing. The issue with a sprint is that there’s no strategy, no tyre changes, no tyre performance differential unless you have vastly different choices.

Attention has already turned to ways of improving the sprint show for 2022. A reverse grid standalone event on Saturday – one that does not impact the starting positions for Sunday’s Grand Prix – has been floated by Brawn as a serious possibility. 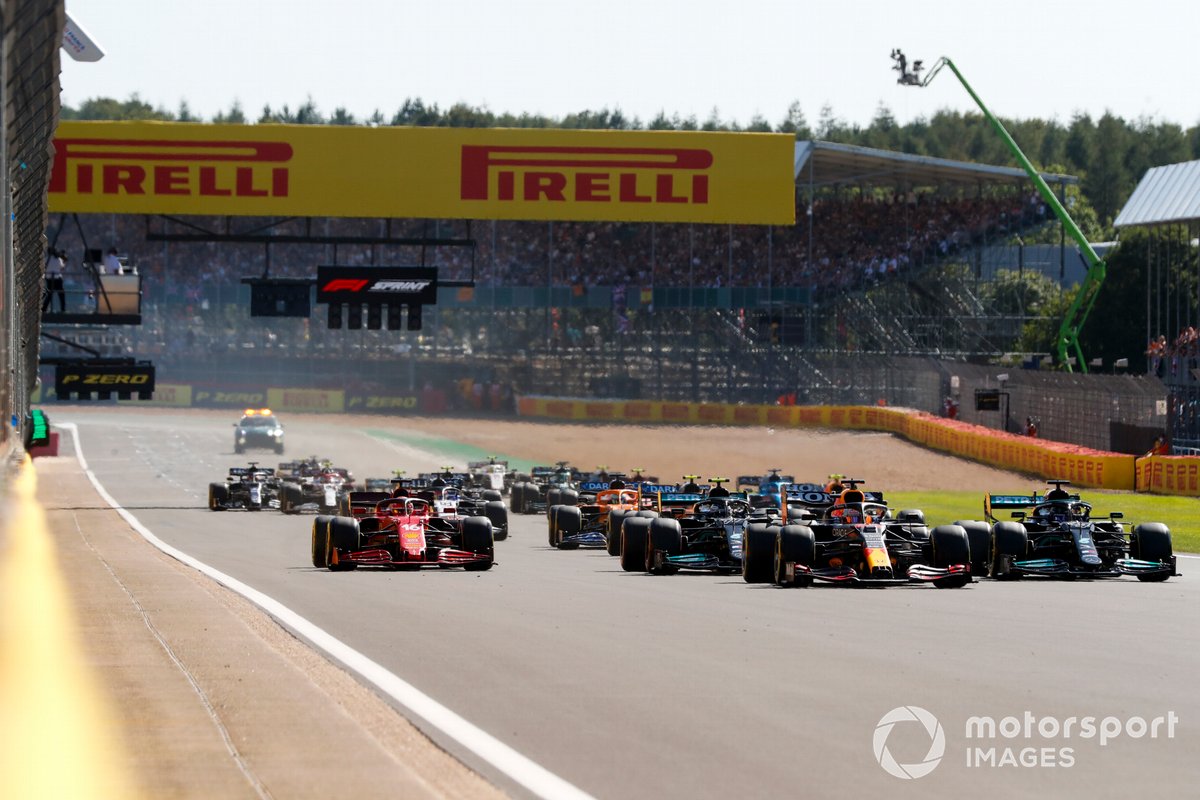 It’s an admission perhaps that F1 already knows that the initial format isn’t quite right, and that a radical change is required for next season. Getting that agreed and passed won’t necessarily be straightforward.

“And I think if we’re doing that then maybe a standalone event is a consideration. So I think qualifying on a Friday, race on a Sunday, and a standalone event with some decent reward, but maybe a little bit of jeopardy in the grid.

Asked to define the proposed standalone format he added: “It would be a race, it would be a separate short format race.

“In a way we’ve given ourselves quite a big challenge, because you can all see the potential in this event. How do we marry that with a classic grand prix weekend and make sure that we don’t cannibalise the event?

“But we’re getting much more engagement with fans on a Friday than we’ve had recently. So everything’s positive. We don’t want to lose that, but we don’t want to go too far, and turn people off.” 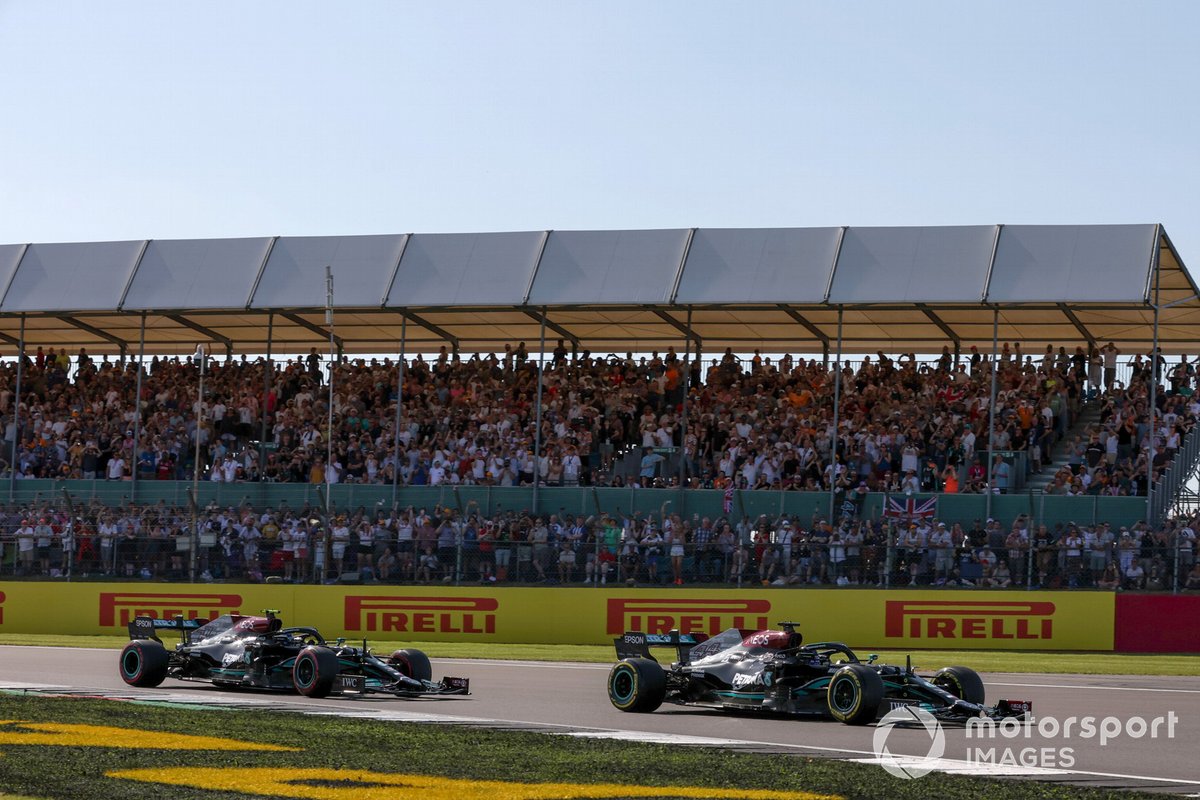 Brawn says that it would be important for the standalone race to generate useful points and thus have an impact on the world championship.

“I think it would have to, I think for the drivers to fight hard I think you’d have to have some decent reward. But I think what you want is some battle between the guys who are at the front of the grid.

“I mean, if you move the guys at the front of the grid back a bit, they’re fighting each other. We’re not talking about a raffle or a random order, we’re talking about something which could enhance the event.”

Reverse grids have been talked about extensively in recent years, and the concept has always been rejected as being too artificial, which is why we have the current sprint format.

However a self-contained reverse grid Saturday sprint that doesn’t impact the grand prix is gaining some traction, and some drivers are already supportive of the idea.

“If it’s a reverse grid that means something for the championship, I’m not a fan of that, even in the junior categories,” says Lando Norris. “But for just something more exciting, something more fun for the fans, I think that’s great, and it doesn’t affect Sunday, which I think is the important thing.

“So you still have the main focus of the weekend. It is more of a challenge for us and the team, and then we can leave that aside for Sunday when we have the main race, and we have that extra bit of excitement in the middle on Saturday.

“That’s kept separate, which I think is the most important thing. I think that’s a good idea, but obviously like Ross said, they’re speaking to us as drivers and as a community of drivers trying to figure out what’s the best thing for everyone.” 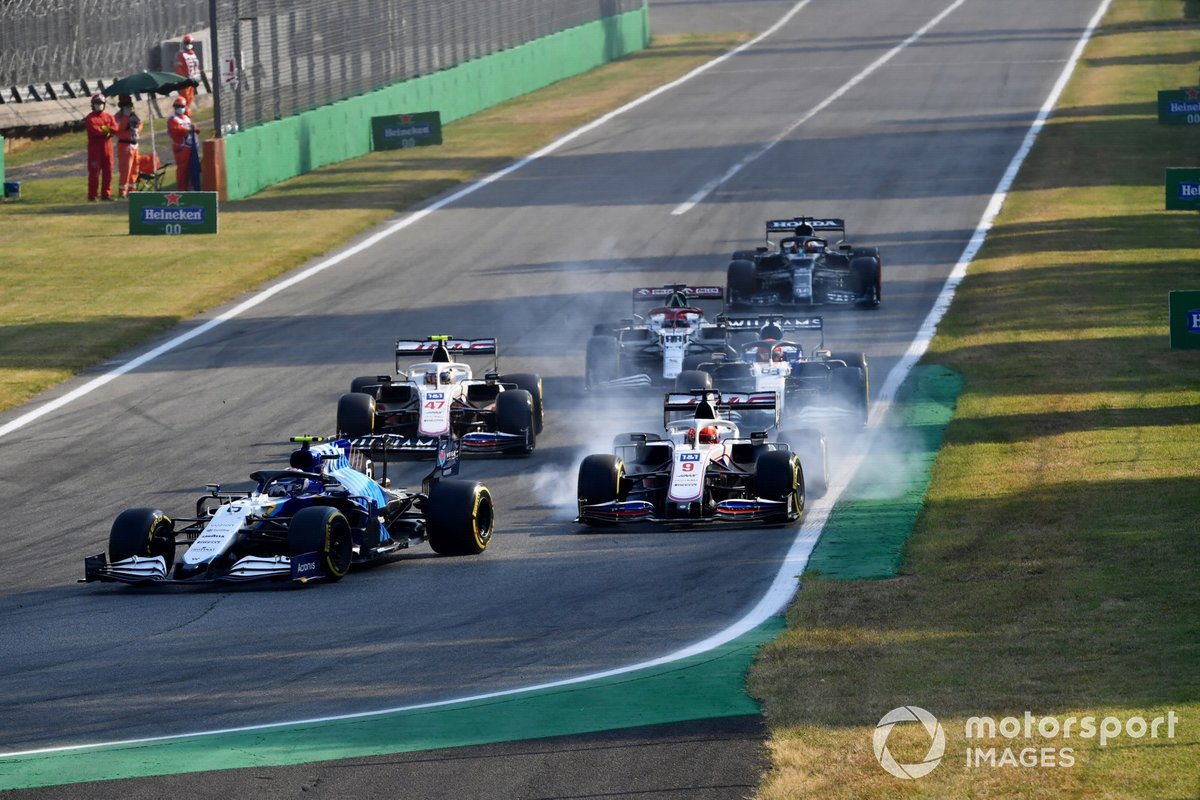 As a team boss Budkowski is open to the principal of a reverse grid, if done properly. However he notes that next year’s rules should in theory make overtaking easier, and we might not need to spice up the show so dramatically.

“I think there’s lots of ideas around,” he says. “Reverse grids have always been universally unpopular in F1, because it was felt as artificial, and a bit of a gimmick. In the next regulatory period there’s a better chance for closer racing, both in terms of getting the grid to be a bit tighter, and more chances of overtaking.

“If that works on both counts, then do we really need things to spice up the show, or is just going racing is enough? That’s one question. Maybe it won’t be the case straight away for next year, because new regs usually open the field before they close it.

“The argument for reverse grids, which actually I like, is it’s not only about the quickest, it’s it’s also about being good at overtaking, which changing the starting order tests. It was an argument from Ross, which I think is is a very fair argument. So I’m not against that.”

Budkowski concedes that it won’t be easy to get it right: “What is the right formula to do it in a way that isn’t too artificial? If you reverse a grid for 15 laps, are you actually giving a fair chance to the guys starting at the back to make their way through the field?

“Do you actually want a reverse grid for the full race? That’s against what F1’s always done. So that doesn’t seem too attractive on paper. But let’s not close the door completely to an idea that would allow us to do it properly.”

Ferrari’s Mattia Binotto has made no secret of his support for the principal of reverse grids.

“I like it because I think for the show and spectacle it can be of interest,” he says. “At the very start of the discussion of the mini race format as Ferrari we were the one proposing it.

“Because I think whatever is your position in the classification somehow that’s bringing some extra spectacle and that’s important for our fans and it’s important for the entertainment that F1 may offer.”

The views of the drivers and teams are important, but in the end F1 has to listen to the fans. So far the consensus on social media appears to be that sprint events as they are currently formatted don’t work, and thus any tweaking should reflect what the public wants.

“If the fans like it and want to see it, that’s what should be done, if we like it or not. And I think it’s margins, is it better, is it worse? I think for us it’s fine. But it’s depends on the fans, and they should have the final voice.” 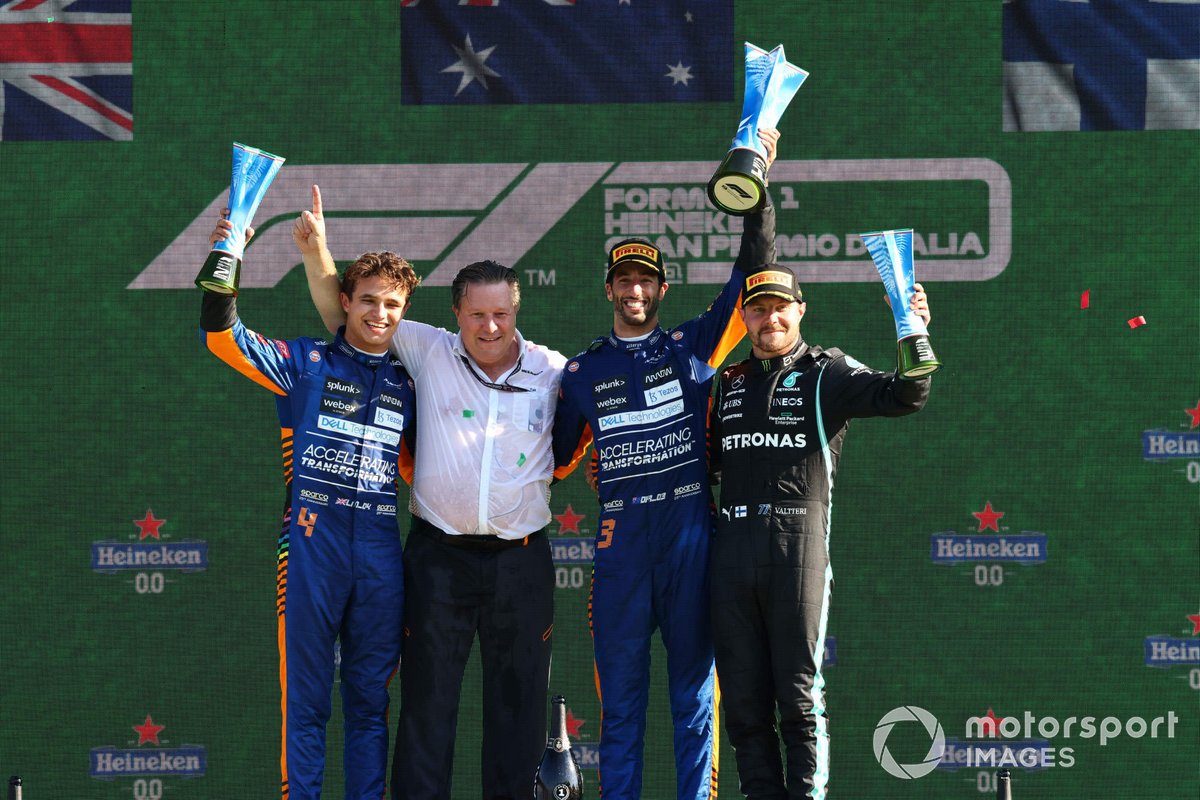