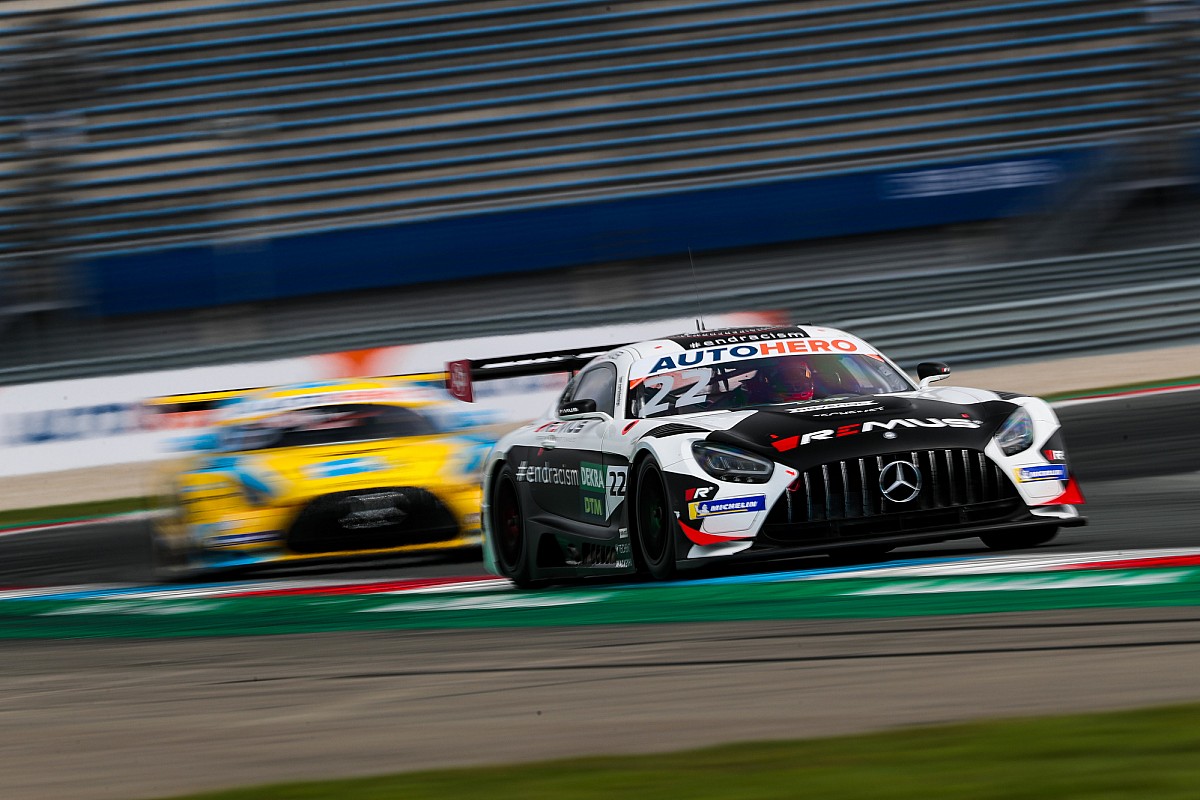 Auer pulled away cleanly from pole position at the start and was already 1.8s in front by the end of the opening lap, aided by Marco Wittmann holding off the field in his heavily ballasted Walkenhorst BMW.

Red Bull Formula 1 reserve Alex Albon tried his best to overtake the two-time champion having cleared the AF Corse of teammate Liam Lawson for third, but couldn’t do enough to complete a move.

The pit window opened at the end of lap 5 with both Auer and Lawson stopping at the first opportunity and Wittmann and Albon following them on the next tour.

As the case was on Saturday, the undercut proved to be extremely powerful at the Dutch venue, with Lawson coming out ahead of his teammate Albon and easily passing Wittmann at Turn 2 as the latter rejoined the track on cold tyres.

By this stage Auer was over three seconds clear of the rest of the field and was seemingly on his way to a comfortable victory.

But Lawson managed to eat into his advantage in the final part of the race, bringing down the gap to under a second for the first time on lap 32.

Auer initially responded to Lawson and doubled the gap over a single lap, only for the Red Bull junior to close in on him once again.

On the penultimate lap of the race the two drivers were separated by just four tenths of a second, with Lawson well placed to attempt a move to snatch the lead.

Ultimately, the Austrian driver hung on to claim his sixth career victory in the DTM from Lawson, having extended the gap to Kiwi to just under six tenths on the final lap.

The result also ended a dry spell for Mercedes, with the Stuttgart-based manufacturer having not recorded a race win since Philip Ellis and Maximilian Gotz swept the second round for the brand in July.

Daniel Juncadella appeared set to claim the final spot on the podium in the GruppeM Mercedes, having got the jump on the battling cars of Wittmann and Albon by pitting on lap 7. However, he was forced to park his car with just three laps from the finish with what was most certainly a mechanical issue.

After losing the lead of the championship on Saturday with an ill-timed safety car, van der Linde again elected to run deep into the first stint, hitting the pit road on lap 20 of 36.

This brought him out in a net fifth behind Wittmann – with Juncadella still running in third at this stage – but with much fresher tyres on his Abt Sportsline Audi.

The South African drew alongside Wittmann several times but couldn’t make a move stick, even falling into the clutches of the chasing Albon at one stage. He eventually crossed the line in fourth place, ceding more ground to title rivals Lawson and Wittmann.

Albon ended up a disappointing fifth in the second of the AF Corse entries, with the Anglo-Thai driver adversely affected by a strategy that favoured his points-leading teammate Lawson.

Championship contender Gotz had an unremarkable run to sixth in the HRT Mercedes, holding off factory Lamborghini driver Mirko Bortolotti, who finished on the podium on his DTM debut with T3 Motorsport on Saturday.

The top 10 was rounded out by Team Rosberg’s Nico Muller, the HRT Mercedes of Vincent Abril and T3 Motorsport’s Esteban Muth.

Ex-Formula 1 driver Christian Klien jumped from 13th to ninth with a stellar opening lap, but a poor pitstop left him tumbling down the order. He eventually retired from what is supposed to be his last guest appearance in the DTM this year after pulling up his JP Motorsport McLaren to the edge of the track with two laps to run.