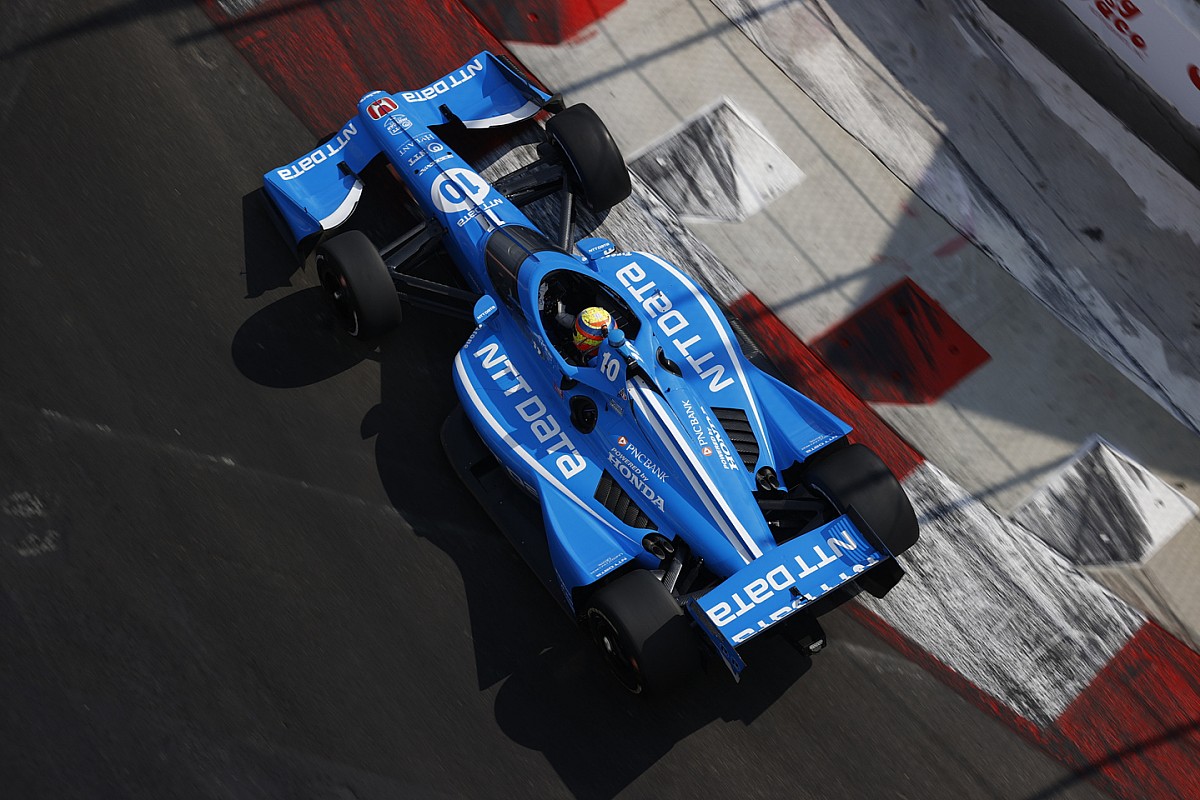 Chip Ganassi Racing’s Palou clinched the title by virtue of finishing fourth as Pato O’Ward, who was his closest challenger heading into the race, retired from the after-effects of a first-lap clash with Ed Jones.

O’Ward was turned into a spin on the first lap by an optimistic lunge from Jones, who attempted to clear James Hinchcliffe at Turn 11 – but caught the Arrow McLaren SP driver ahead.

Although O’Ward was able to gather up his car and continue, the Mexican driver’s championship hopes were ended on lap 18 as his right-rear driveshaft broke – a legacy of the Jones impact – to force him out of the reckoning.

However, Palou’s fourth place would have been enough to secure the title regardless, and the Spanish driver put in a no-frills drive to collect his first ever title, avoiding damage in the lap 1 skirmish in which he lightly touched Jones’ gearbox with his front wing. 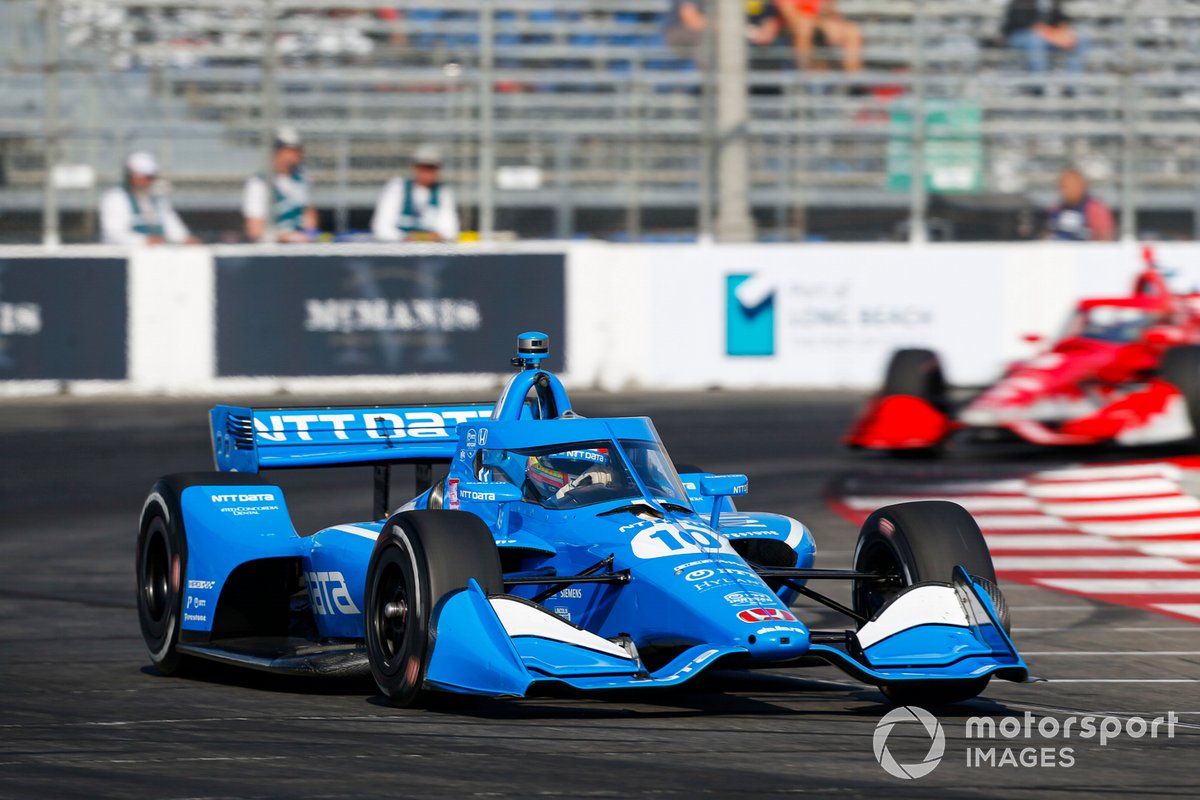 Andretti Autosport’s Herta put in a stunning charge in the opening half of the race to get on terms with the leading pack after qualifying a disappointing 14th, picking his way through the cars ahead and shuffling up the order.

Following the third caution, caused by Marcus Ericsson’s Turn 1 crash into the wall, Herta employed his soft-compound tyres to swashbuckle his way past the leading duo of Newgarden and Scott Dixon, who were both running the harder tyres during their middle stints.

Herta then proceeded to put a considerable gap over Newgarden as he sought to cover off the Penske driver’s expected tyre advantage after the last round of stops, building it to almost 10 seconds at its zenith.

Following the final round of stops, Herta’s advantage was wiped out by a final caution period with just over 20 laps remaining, as Conor Daly and Oliver Askew came to blows at Turn 9.

Herta, now on the harder tyres, had to keep Newgarden – who had a slim mathematical chance of winning the title if misfortune struck Palou – on the softer rubber behind him.

Despite Newgarden’s late-braking attempts to close up at the fountain section, Herta was able to stay clear and bag his second consecutive victory. 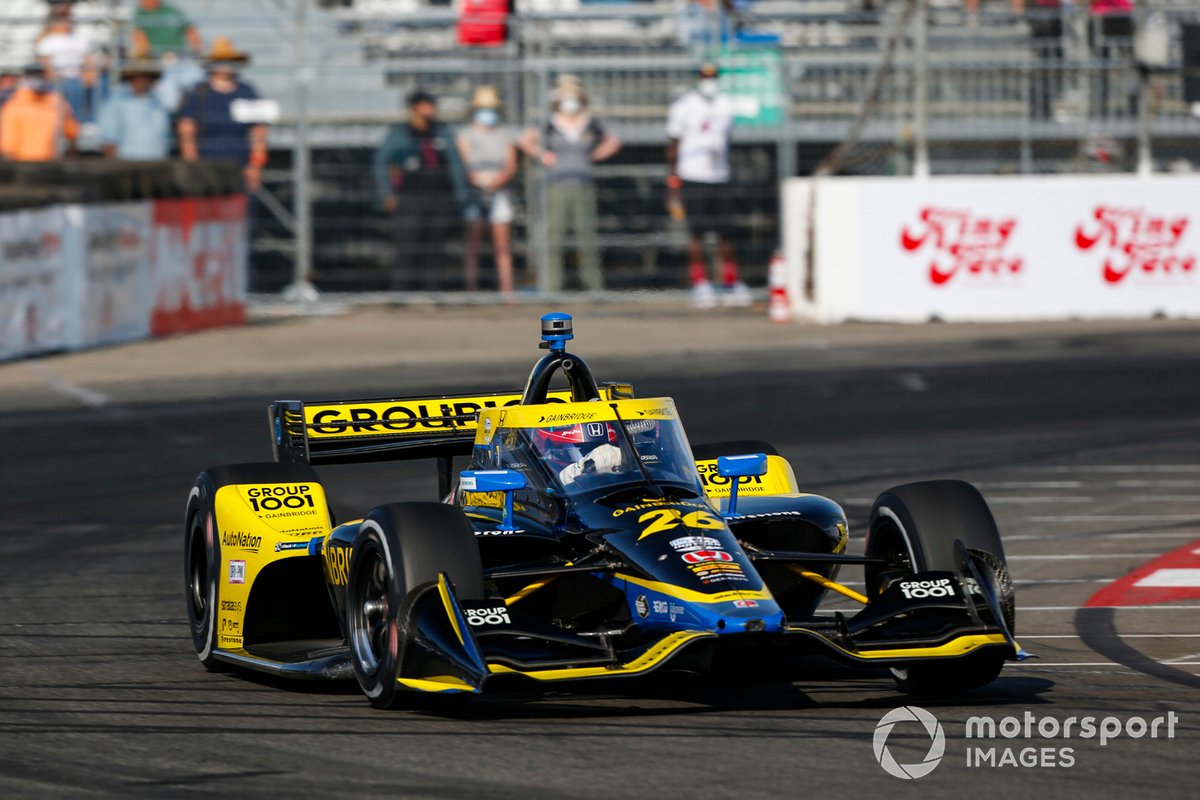 Dixon claimed third place, having briefly challenged for victory at the start before Newgarden held him off into the first turn, ahead of Ganassi team-mate Palou – who was clinical on the road to his maiden title triumph.

Penske’s Simon Pagenaud finished in fifth having been the first of the frontrunners to start on the hard tyre, as Alexander Rossi concluded a tough season with the Andretti squad with sixth place.

Jack Harvey made excellent use of an opportunistic strategy to claim seventh in his final Meyer Shank Racing appearance, ahead of AJ Foyt Racing’s Sebastien Bourdais.

Bourdais atoned for his early-race spin – which brought out the first caution on lap 2 – to finish eighth, pitting ahead of the O’Ward yellow to get back on level terms with the rest of the runners, as Takuma Sato and Will Power completed the top 10.

Scott McLaughlin finished 11th to secure the rookie of the year honours, as Romain Grosjean’s bright start was undone by a light brush with the wall, which broke his rear suspension to end his time with Dale Coyne Racing.

McLaren SP had been able to piece together O’Ward’s car and sent him back out on track, albeit well over 30 laps down, before he called it a day late on.