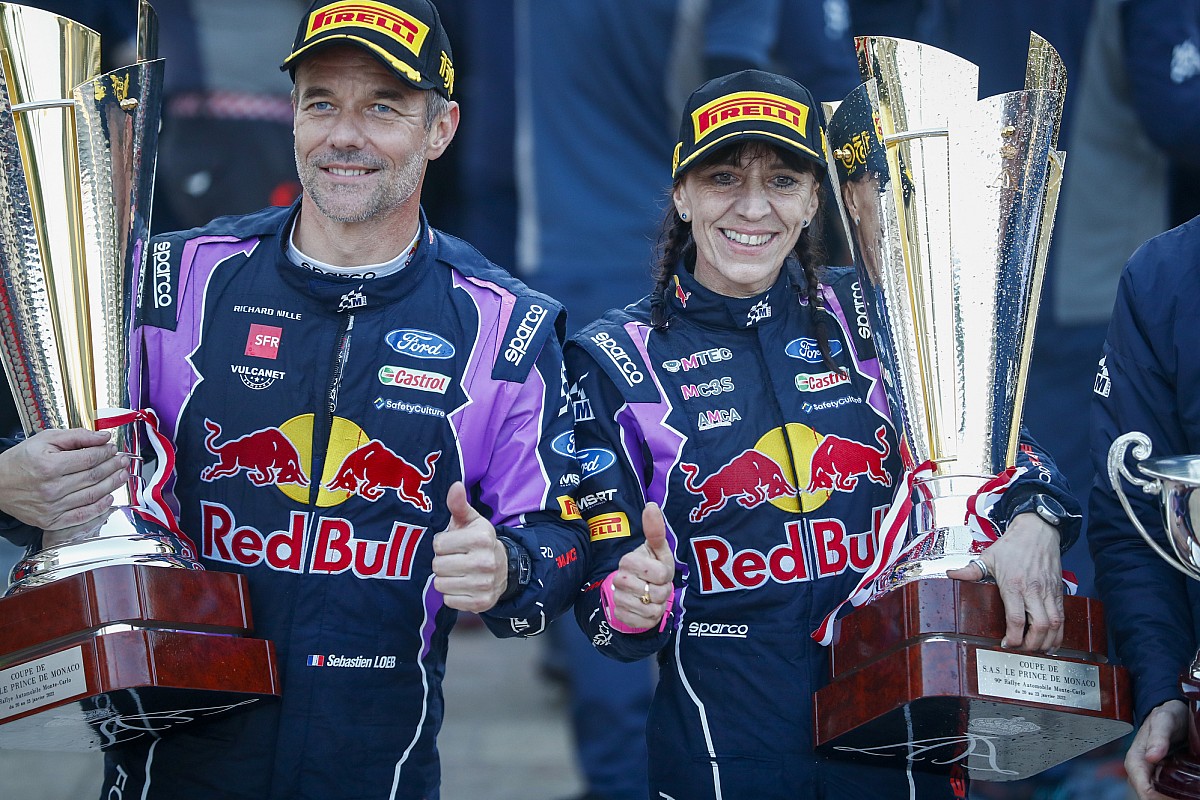 After coming out on top in the battle of the WRC’s greatest of all-time, Sebastien Loeb and co-driver Isabelle Galmiche fully warrant the top performer status.

At 47-years-old, even the nine-time champion questioned if he can still be competitive in brand new hybrid WRC machinery in his backyard, just days after contesting a gruelling 12-day Dakar Rally. The simple answer was a resounding, yes.

Loeb and Galmiche, making her WRC debut aged 50, were supreme as they took the fight to Toyota’s reigning world champion Sebastien Ogier. Loeb was immediately on the pace despite limited time in the Puma as he rolled back the years to remind everyone of his talent.  After dominating Friday to take the lead, Loeb was locked in a dogfight with Ogier that the latter seemed to have the edge in on Saturday, before Sunday’s late drama.

In the end, Loeb won six stages compared to Ogier’s five, and while there was an element of fortune in the overall outcome after Ogier’s penultimate stage puncture handed Loeb the lead, the Frenchman thoroughly deserved the victory by 10.5s.

“We had a big fight with Seb [Ogier] all the weekend. It was just an amazing moment for us,” said Loeb.

“It is 10 years since my last championship so I’m really proud that I’m still able to fight with the young guys and to be able to win a rally. For sure it is one of my best memories.”

Likewise, Galmiche faced plenty of pressure note calling for such an icon, but the part-time maths teacher was faultless, becoming the first female to stand on the top step of a WRC podium since Fabrizia Pons in 1997.

“I think perhaps it might be the best day of my life,” said Galmiche. 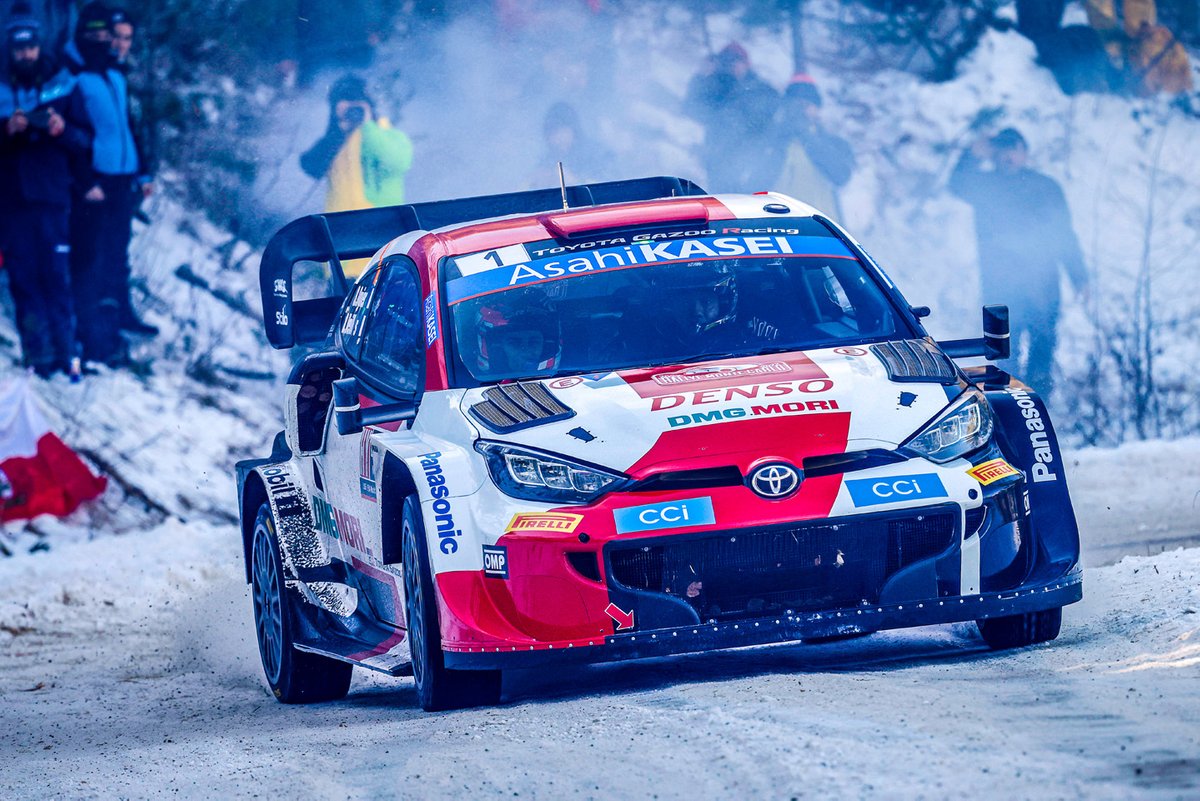 Had Sebastien Ogier avoided a front left puncture on the penultimate stage, the odds were he would have added a ninth Monte Carlo win to his glittering tally of accolades.

The Toyota driver and new co-driver Benjamin Veillas were pushed to the limit by Loeb throughout the four days, but when it mattered the eight-time champion showed he had the measure of his rival. Saturday’s second pass of the treacherous snow and ice-affected Sisteron stage was perhaps the telling moment, after taking 16.1s out of Loeb, both on the same soft slick rubber, to create a 21.1s lead heading into Sunday.

Granted, Loeb took time out of Ogier in Friday’s stages, but that Saturday afternoon performance would in any ordinary rally been enough for victory. The final stage also proved the pace Ogier had up his sleeve by incredibly taking nine seconds out of Loeb, and had he not incurred a 10s jump start penalty, Loeb’s victory margin would have been a staggering 0.5s.

Ogier more than played his part in a thrilling battle of rallying’s GOATs, but all credit to him for his attitude throughout the event. There were no sour grapes at the finish – just admiration for having played his part in one of the WRC’s greatest ever duels.

“What a fight and what a joy it was to make this rally one we will remember forever and one very special for me,” Ogier told Autosport.

“Okay this weekend we have not come out as the winner but I think we can definitely keep our head up and keep smiling because we have done the job and fate decided differently today.

“I’m still smiling and still enjoy this fight very much so I have to say well done to Seb [Loeb] and [co-driver] Isabelle [Galmiche] it has been a pleasure to fight with them.” 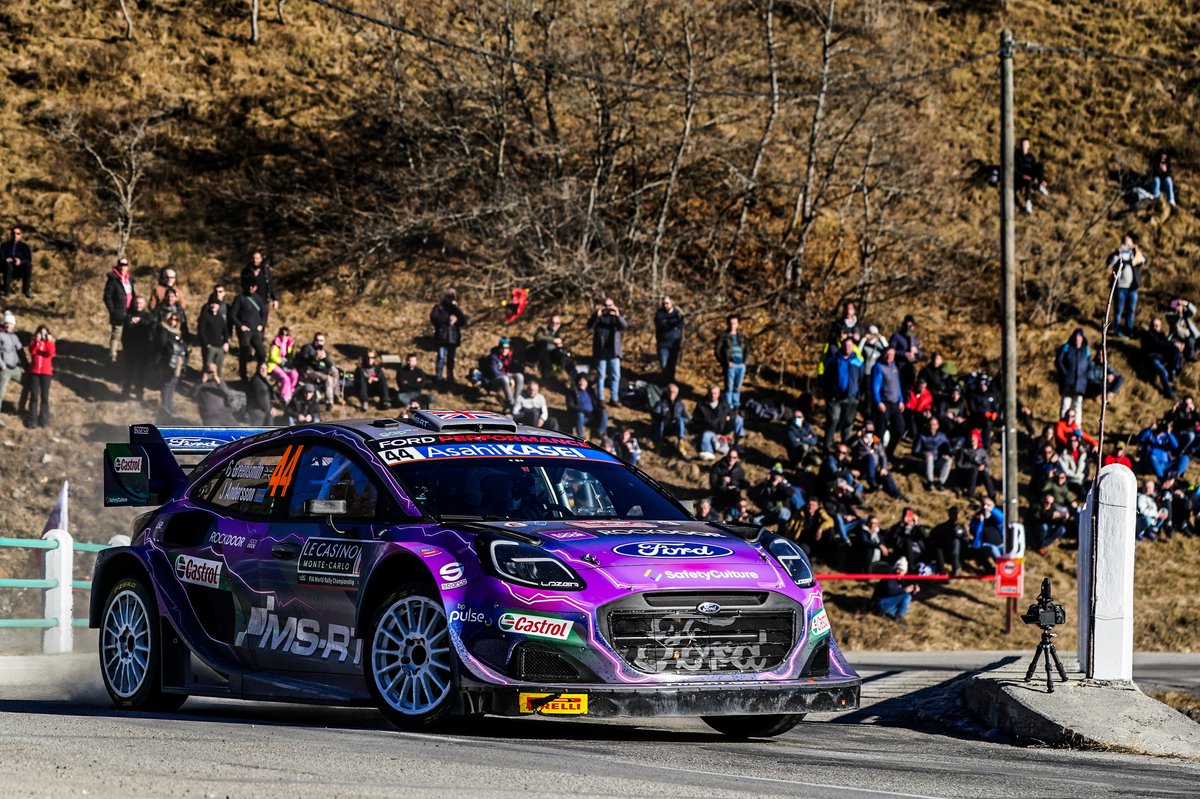 The two Sebastiens aside, Gus Greensmith fully deserves an honourable mention for the best all-round drive of his WRC career. The Brit quickly gelled with the Ford Puma and was regularly threatening his more experienced rivals at the top of the timing screens.

An engine issue robbed him of a potential podium, but he left the weekend as a stage winner for the first time in his career, after beating Monte Carlo masters Ogier and Loeb in stage 7.

“Last year we didn’t have the package to be able to fight at the front, and we had to accept that,” said Greensmith.

“This year we do, so it is one of those situations where you have to keep your head held high and pushing on and putting in the work, and first round of the season it is already paying off.”

The challenging mountain asphalt roads of Monte Carlo produced a number of luck escapes but M-Sport’s Adrien Fourmaux and co-driver Alexandre Coria were the luckiest to walk away from a frightening impact with a rock face that catapulted their Puma into a ravine. The new FIA regulated space frame chassis stood up to the job to keep their pair safe, but their rally was over after stage 3.

Hyundai’s difficult start to the new rally era was typified by a scary moment for Oliver Solberg, who lost concentration and ran off the road after being subjected to exhaust fumes entering the cockpit of his I20 N for two days. Hyundai attempted to fix the problem monitoring the situation throughout, but ultimately decided to retire the car on Sunday with Solberg and co-driver Elliott Edmondson feeling unwell. The pair are understood to be okay after a medical check up.

Toyota’s Elfyn Evans had to thank a group of fans for getting him out of precarious predicament that saw his GR Yaris perched on a steep hillside after clipping a grass bank.

Evans was sitting third at the time he made a clumsy mistake, but was able to rejoin the rally after receiving help from fans. 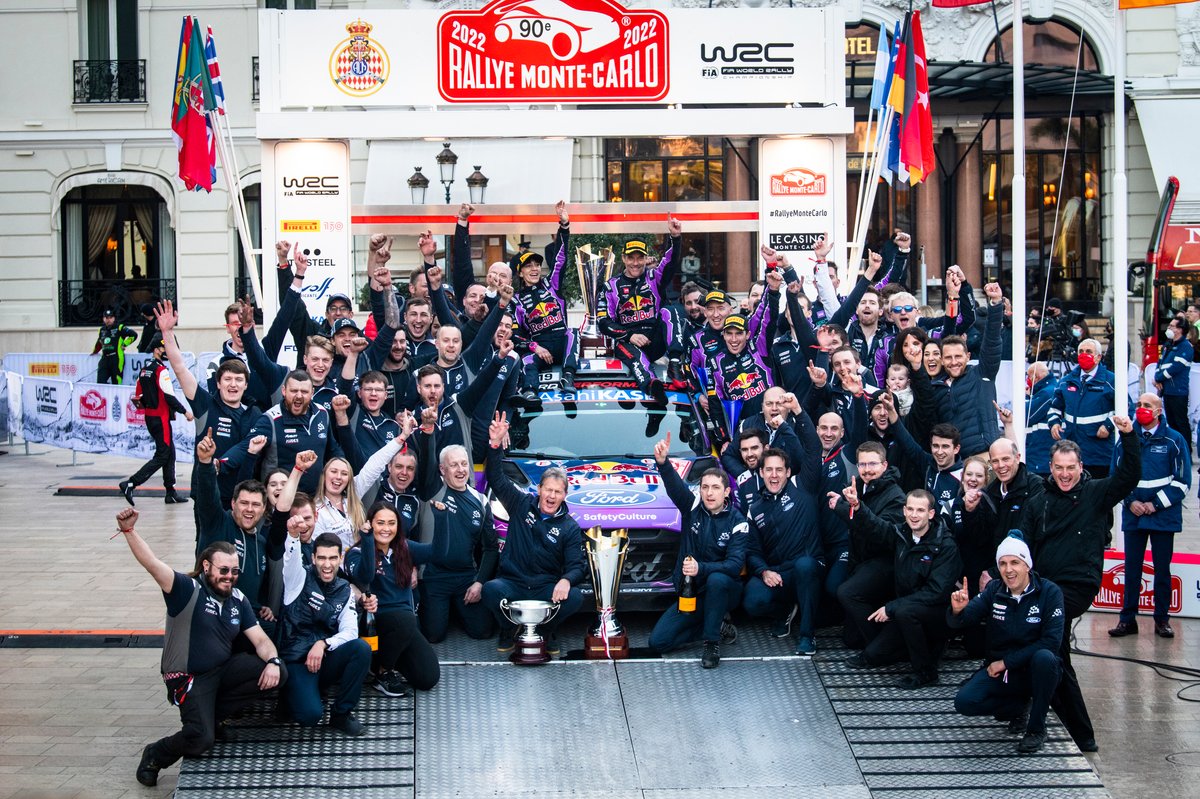 Team of the Week – M-Sport Ford

Three cars inside the top five signalled M-Sport Ford is back as a genuine championship contender this year. Its all-new hybrid Ford Puma Rally1, the focus of the operation for the last 18 months, is a real weapon as the team continued its impressive tradition of building winning cars at the start of a new set of regulations.

Loeb headlined the show with his impressive performance to win the event, but all of its drivers showed glimpses into the potential of the Puma, jointly developed with Ford Performance in the US. The car came out of the blocks fast and continued to be equally as fast if not quicker than Toyota, its nearest rivals.

Prior to Monte Carlo, the semi-factory Ford squad last tasted victory at Rally GB in 2018 and its last podium arrived at Rally Mexico in 2020, so it had been a long time between drinks. Victory last weekend in front of Ford Performance boss Mark Rushbrook sparked wild celebrations for the team after a particularly challenging drought.

The Puma is clearly fast but there were teething issues behind the scenes, as there were for its rivals Toyota and Hyundai. However, all of M-Sport drivers gushed about the potential of this car.

“This is the result of 18 months of incredibly hard work by a group of people all the way through Covid, and it’s all worth it because this is an absolutely amazing machine,” said Breen, who finished third.

The worrying aspect for its rivals is there is plenty more to come from the Puma, according to M-Sport boss Malcolm Wilson.

“There is no question, I think in fairness there is more to come from all of the cars, but I think it is great to see that we still have close competition,” said Wilson. “We’ve still got drama and we’ve still got excitement and that is the great thing about this sport, it is just incredible.”

Drivers always remember their first stage win and for Greensmith his reaction to beating Ogier and Loeb, who shared 16 Monte Carlo wins between them, was priceless.

Any concerns the new hybrid Rally1 cars wouldn’t be as spectacular as their predecessors were quickly vanquished once these 500 horsepower beasts tackled the narrow mountain roads.

There has been along rivalry between Loeb and Ogier but the pair showed that while they’re the best of enemies on the road, they are both friends away from the competition. 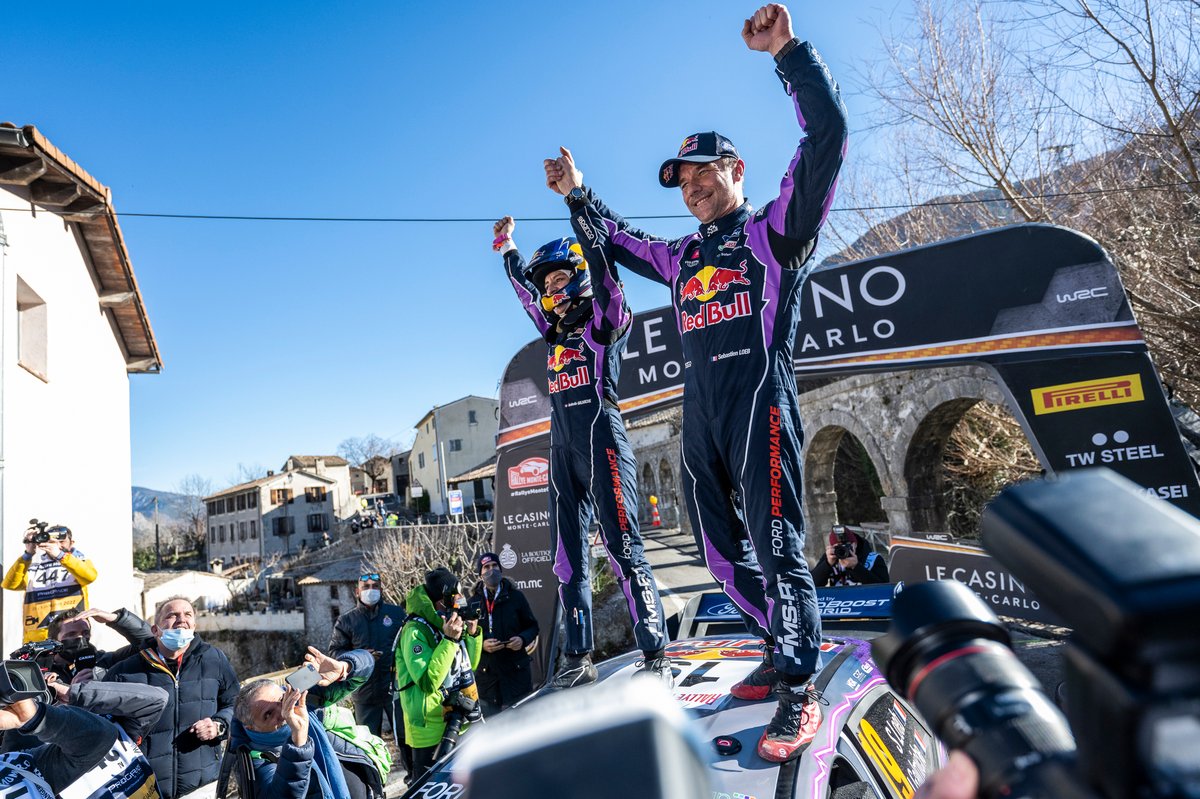 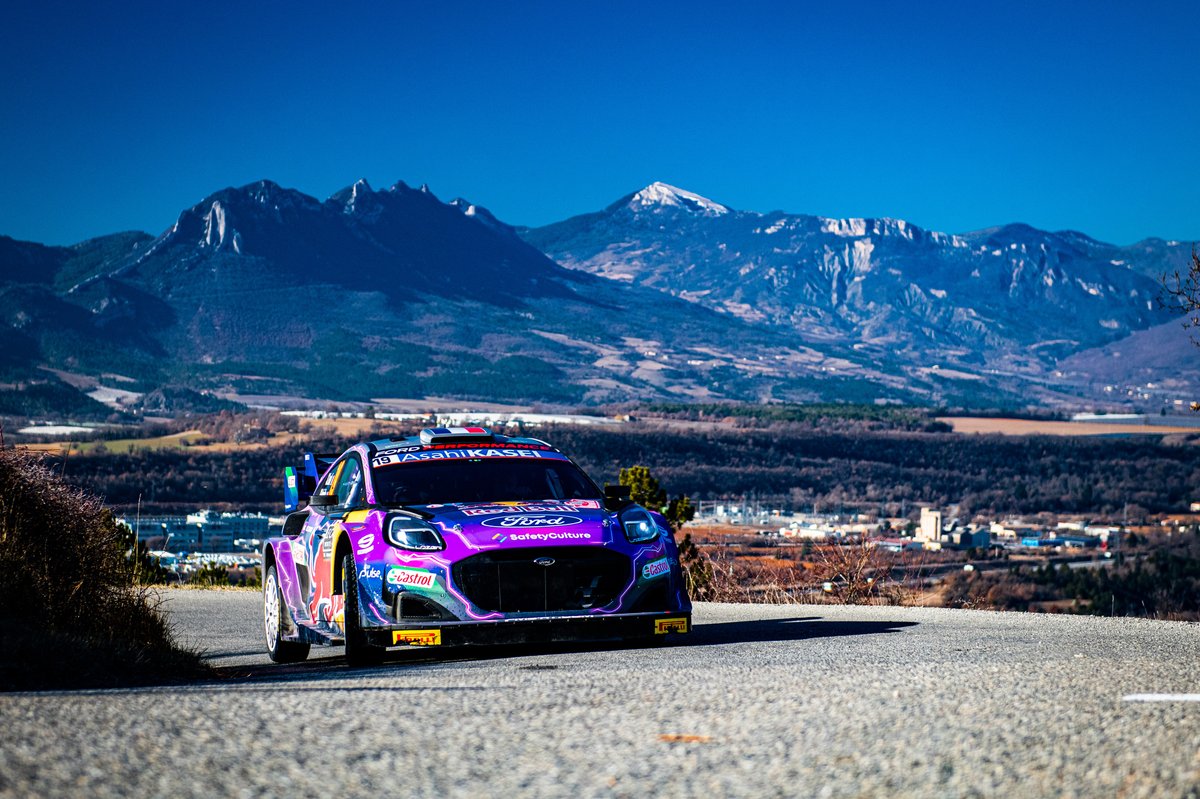 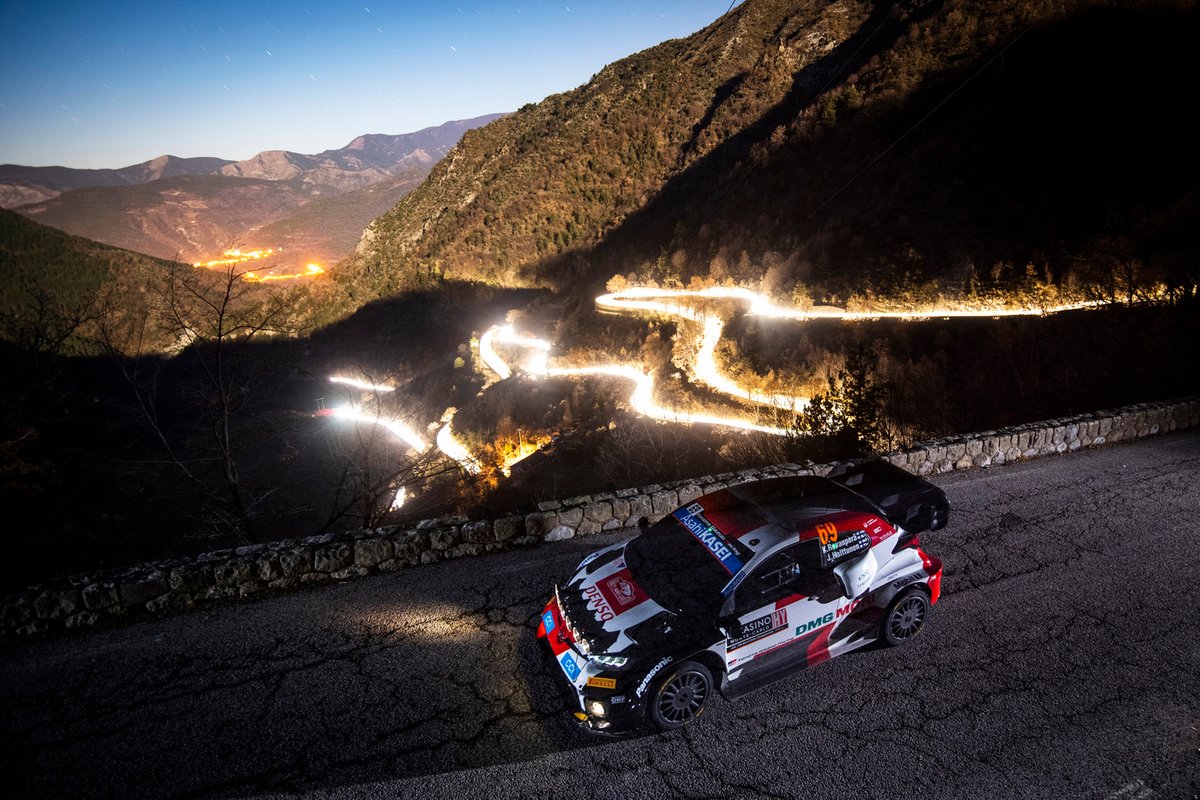 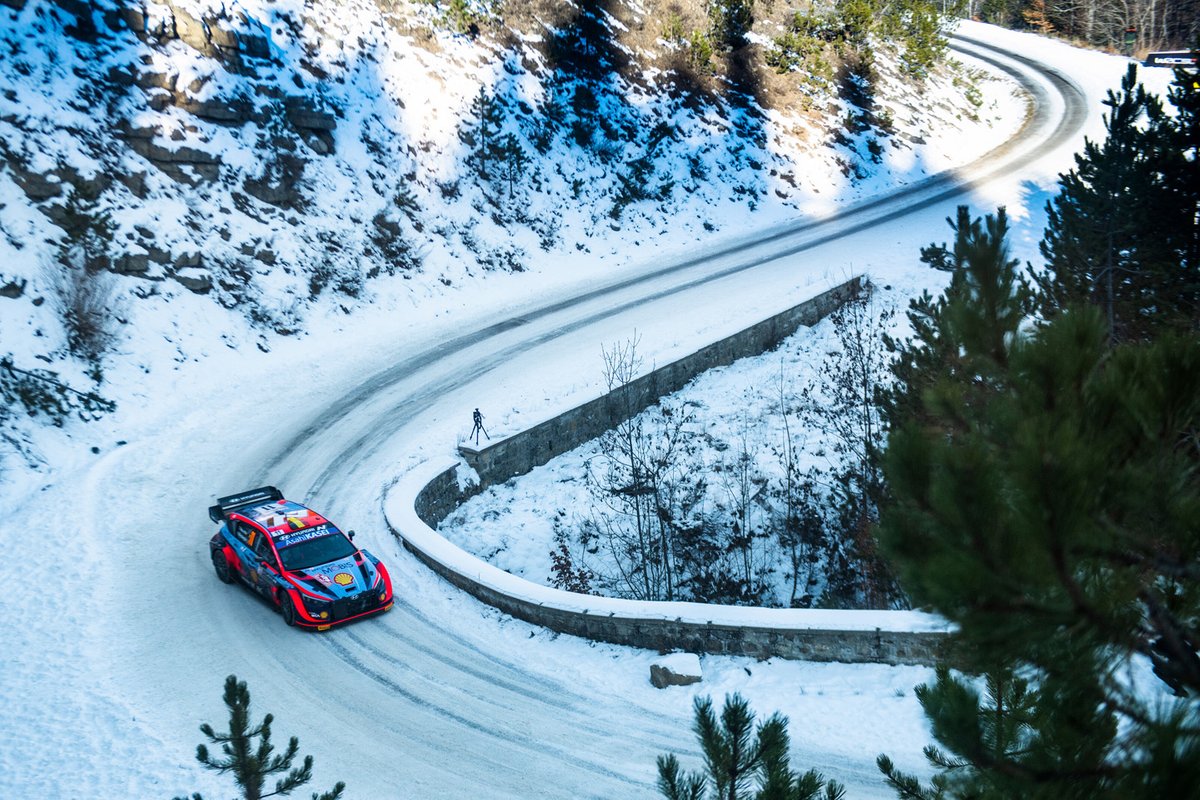