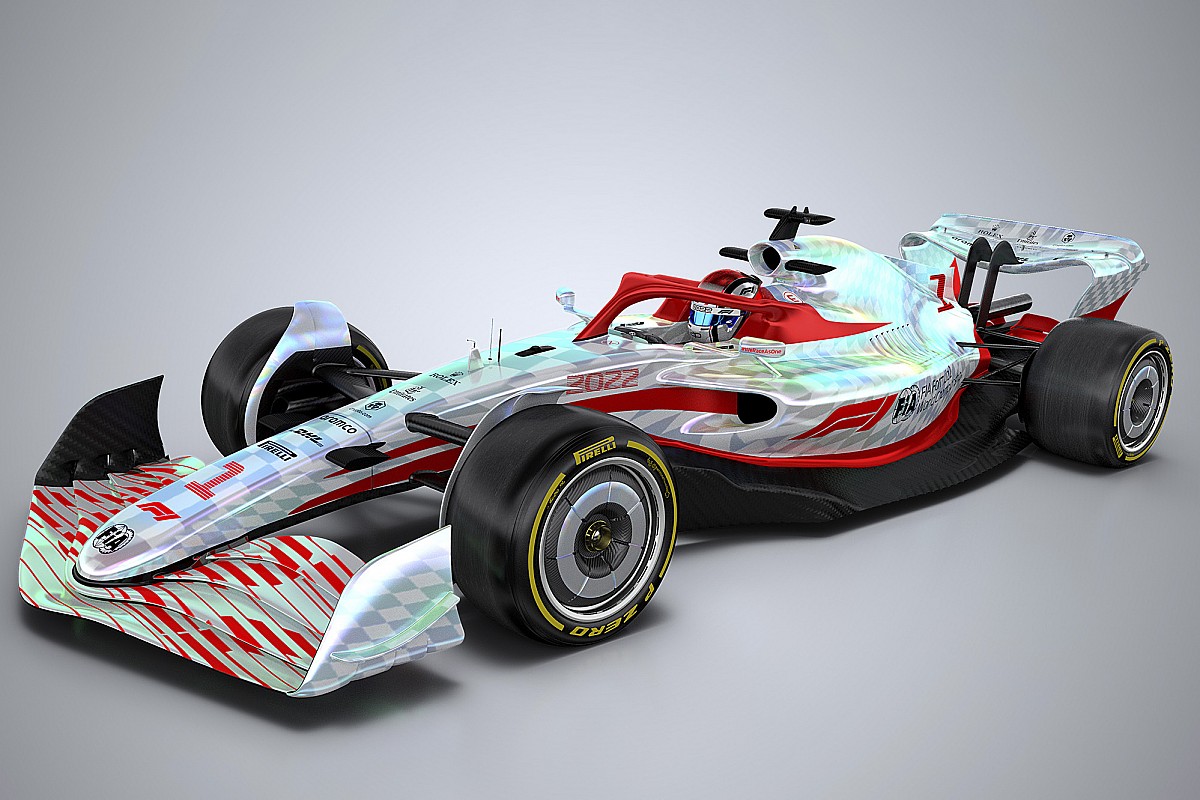 A showcar created by FOM last year provided some insight into the basic form that the new designs will take,  but teams have been busy developing their own ideas based on what they think can give them the edge over their rivals.

F1’s designers have been more constrained in some areas, because the FIA does not want ideas to create closer racing immediately undone, but this doesn’t necessarily mean that all cars will look alike.

Here we take a close look at the rules and what are the key areas of focus for the new 2022 cars.

The front wing design leads the charge in this respect, as some of the freedoms seen under previous regulatory eras have been removed and the overall design simplified.

Since 2009, teams have been using the outer section of the front wing to generate ‘outwash’, pushing airflow across and around the front tyre in order to alter the turbulence it generates and direct it away from the car.

In that timespan, several additional methods arose to further address this turbulence issue, with aerodynamic shaping and furniture on the front wing, front brake ducts, blown axles, and wheel rim design all used to improve performance.

In recent years many of these design elements had been taken away from the teams by the FIA, but fundamentally they were still able to incorporate aspects of them that assisted in providing a performance boost. The change in the car’s overall aerodynamic design philosophy for 2022 in some ways mitigates a need to strive for these methods, but the regulations have been framed in such a way to prevent them in any case. 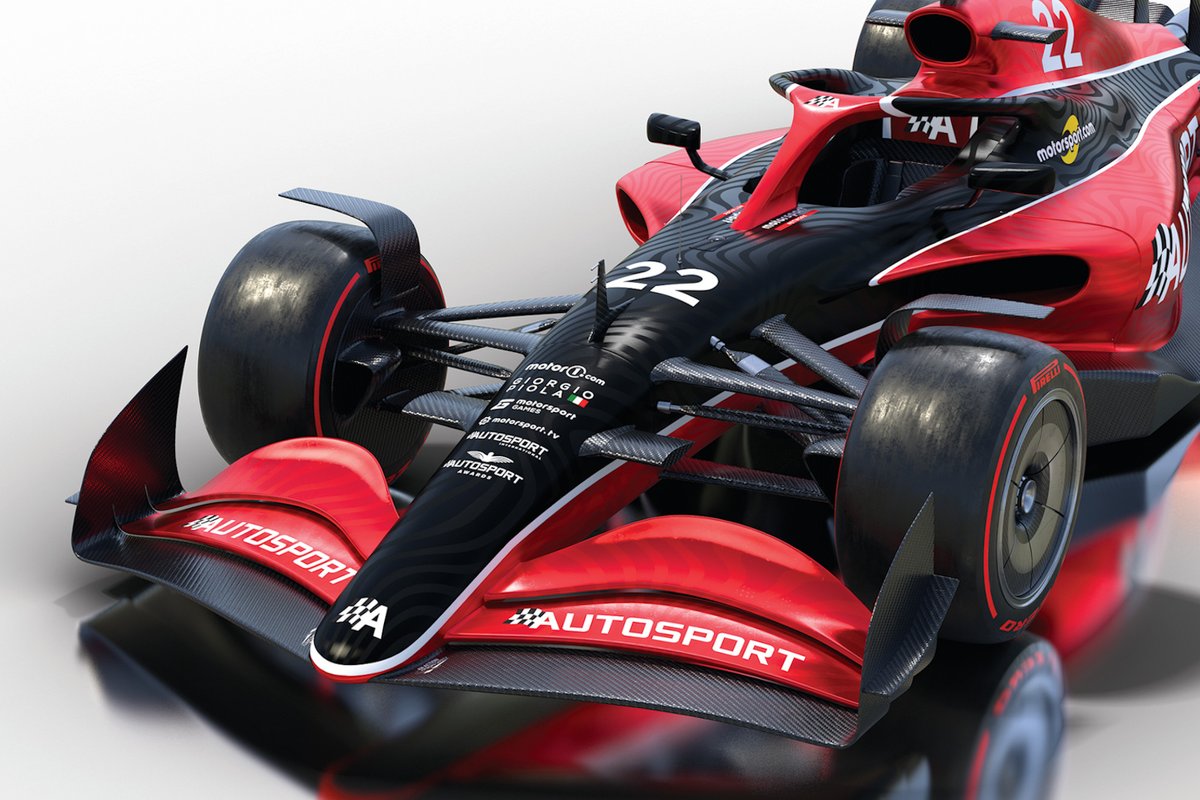 The neutral central section of the front wing – expected to help with closer racing when it was introduced in 2009, but which inadvertently created an incredibly powerful aerodynamic resource for teams to harness – has been removed. Instead, the teams will have to work without the Y250 vortex and will be required to fix the wing profiles to the main body of the nose.

In terms of the wing profiles, their number has been reduced further still, down from five elements to four, and their geometry heavily limited across the span. At the outboard end, the shape of the endplate is also heavily restricted, forming the upswept triangular shaped outer section of the wing. It may also carry a small canard on the outer face, but is also limited in its design scope.

The strakes that usually adorn the underside of the wing and help redirect the airflow will also be absent, having been removed due to their ability to help generate outwash.

As part of a soft fall into the regulations we’ll race under this season, the governing body made numerous changes to simplify the cars in 2019. One of these was the front brake duct assembly, but things have been taken a step further for 2022 as once again the regulations have been framed in a way to prevent teams from generating outwash.

The unfettered access to aerodynamic, rather than brake-cooling solutions, that pass through the assembly have been curtailed, as the brake discs (330mm up from 278mm) and the brake drum itself will also increase in size to accommodate the introduction of the 18-inch wheel rims and the larger well they create. 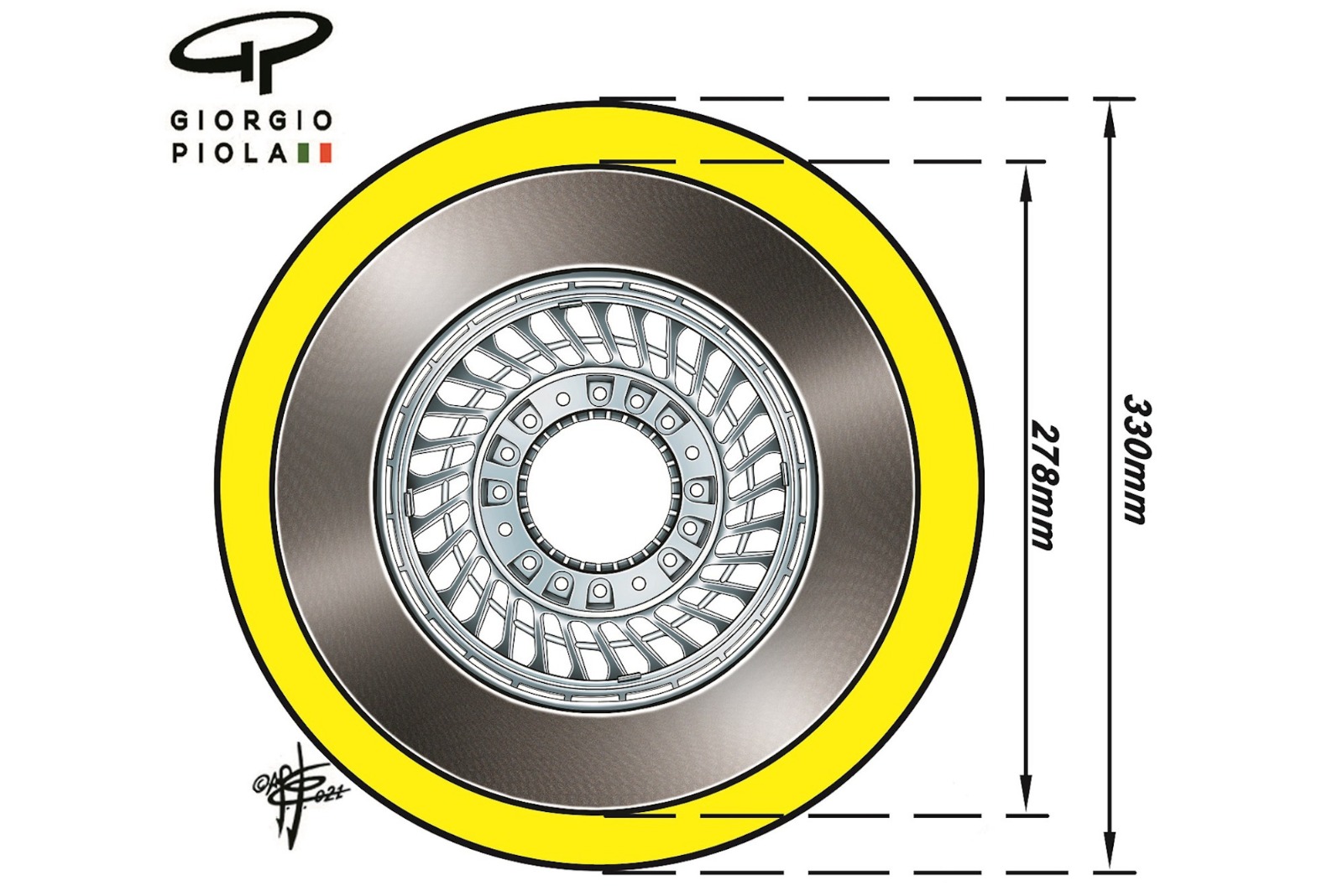 All teams will be supplied the 18-inch wheel rims by BBS in 2022, as the company won the tender to become F1’s standard supplier.

The brake duct’s end fence will also increase in size in response to the size of the wheel well. Furthermore, the use of winglets, aside from the attached upper wake deflector and the lower skirt, will be restrained too.

On the outside of the wheel, rim covers make a return too, having been banished from F1 in 2010. This time they’ll have a uniform design and will rotate with the wheel, rather than being static as most were in their former guise.

There’s also a provision within the regulations to allow for a display panel on the wheel rim covers in order to display information to the spectators. It was a mockup of this which McLaren teased in the post season test at Abu Dhabi.

Teams will also be required to overhaul their suspension designs as F1 returns to a classically sprung model, via springs and dampers, rather than some of the hydraulic ancillaries that have been used in the recent past. Many teams will also have to rethink the outboard suspension design too, as the use of upright extensions and the extreme push rod on upright solutions have been outlawed.

As a consequence of these changes and the overall changes to the aerodynamic philosophy of the car, it’s plausible that some teams will return to the use of pull rod suspension at the front of their cars. This was last seen in 2015, as Ferrari finished its three-year run using the layout. 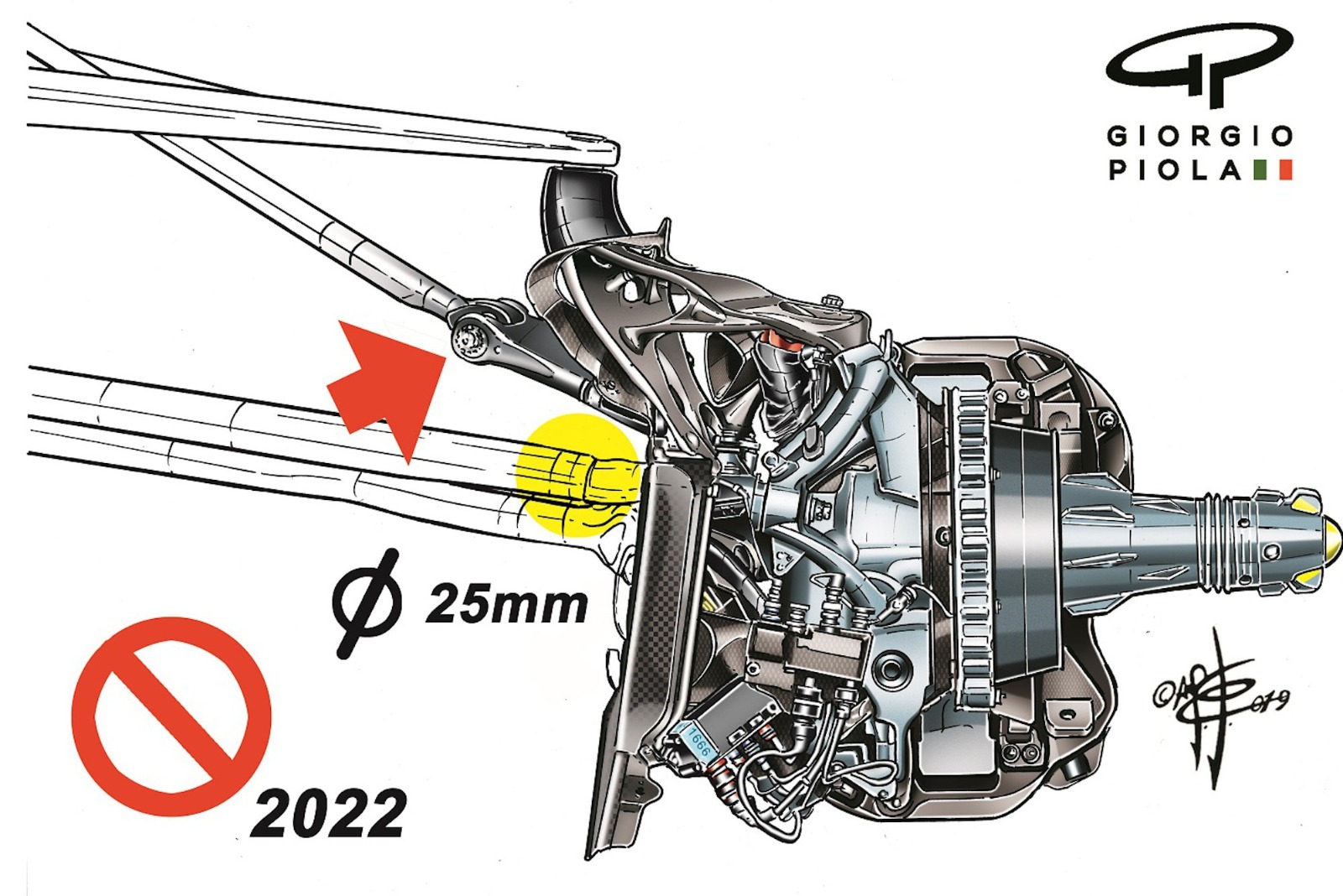 As part of the aerodynamic overhaul and shift in focus to a design more influenced by the car’s underbody, plus simplification of the front and rear wing, the floor area will also contribute more to the overall downforce being generated than in the previous generation of cars.

Empowering the underbody has resulted in a different design when it comes to the floor’s leading edge. This will include up to four fences and an edge wing, plus the abolishment of the bargeboard region ahead of them.

The design of the sidepod will also look different going into 2022, as the high inlet that all teams used during 2021 and was first introduced by Ferrari in 2017 will be much more difficult to employ.

This is due to the upper of the two SIPS (Side Impact Protection Spars) needing to be located at least 60mm higher in 2022 than they were previously. This reduces the box region in which the sidepod inlet could be placed. This is not to say, however, that teams would actually have found a solution that continued to offer the same performance as it did were they able to place the SIPS and inlet in the same way as before.

With so much changing in regard to how the flow structures make their way from the front of the car to this point, it might have become redundant anyway. But, the regulations were adjusted to make it less likely to be used in any event.

Another change that could have a dramatic effect on the overall design of the sidepod, and the car’s rear end, is the reintroduction of bodywork panels that include cooling louvres. The use of these to reject heat created by the power unit and its ancillary components could lead to some interesting differences in bodywork, depending on what the prevailing conditions and what the given circuit calls for in terms of downforce levels.

This could generally lead to a much tighter coke bottle region too, if they’re used as part of the consistent design portfolio. This will be determined by numerous cooling and aerodynamic decisions made elsewhere too. 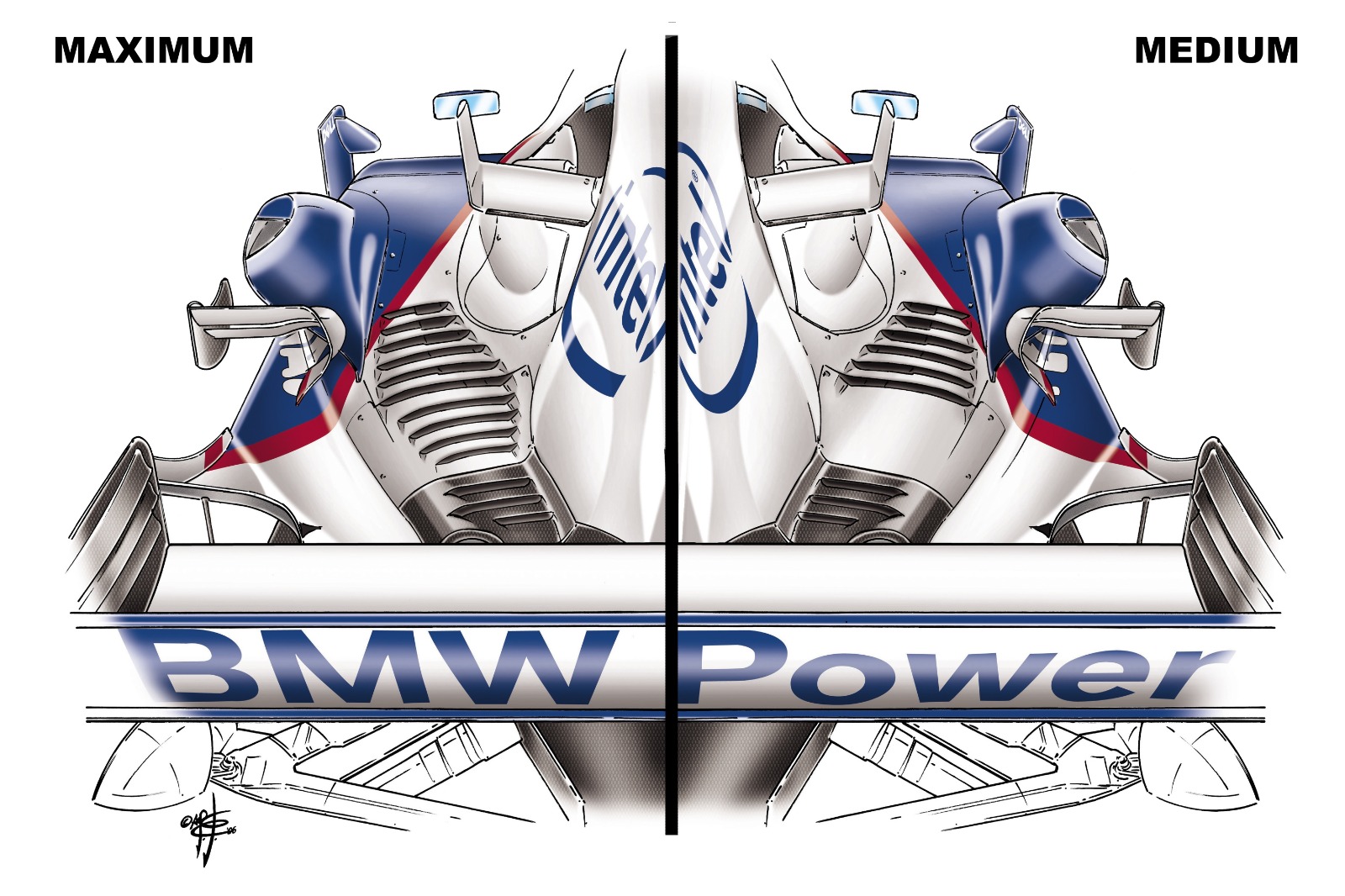 Bringing up the rear

At the rear of the car, the separate wastegate pipeworks have been done away with once more, with just a single, centreline exhaust pipe to be used in the last 150mm. This will exit close to another returning feature, the lower beam wing, which will once again make up part of the rear wing’s structure, having not been used since 2013.

The beam wing can be made up of two sections, the design of which will certainly differ from team to team, with a Gurney flap also optional on the trailing edge of the uppermost element. Its reintroduction might also give the teams some more freedom in terms of the design of the rear wing pillars too, be it structurally or aerodynamically.

In terms of the overall design of the rear wing design, it is a large departure from what we’ve seen before too, with the endplate creating a volute shape as it merges with the flaps. While this has an interesting aesthetic, it also has a function too, with the strength, shape and position of the tip vortex ordinarily created by the wing now altered considerably, impacting the wake generated by it as a consequence.

Given the shape of the new rear wing, plus its absence from the show car and the renders produced by F1, some might be forgiven for thinking that DRS has been cast aside too. However, it is still present and will continue to form part of the team’s design focus. 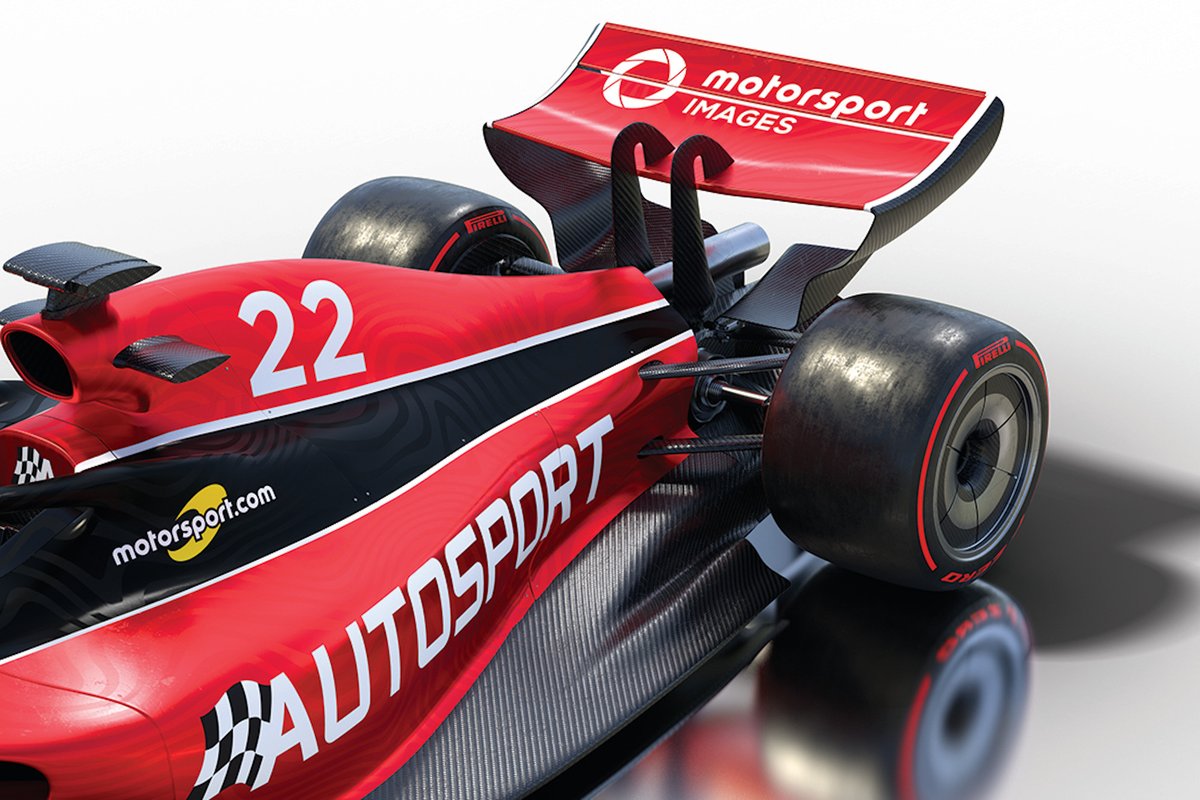 For those wondering how DRS could be applied given the shape of the rear wing, the earlier presentation of F1’s windtunnel model gives an idea of how the flap can be hinged in the outer corner. However, this doesn’t show the central actuator, pod and linkage for which each team will have their own interpretation.

Teams must also consider the car’s overall wheelbase, with a measurement added to the regulations for the first time. While this won’t dramatically reduce the length of the cars from what has become the norm over the course of the last decade, at 3600mm it does draw a line in the sand and prevent things from escalating further still.

One other aspect of the car’s design that’s been increasing over the course of the last few decades is its weight. Unfortunately, the brakes haven’t been put on this either. The minimum mass of the car will be set at 795kg in 2022, up from 752kg last season.

It’s another hefty increase, which takes into account the increase in weight posed by the larger wheel rims, tyres, brake discs and brake ducts, while building in some extra margin for the safety structures that require more demanding crash tests.