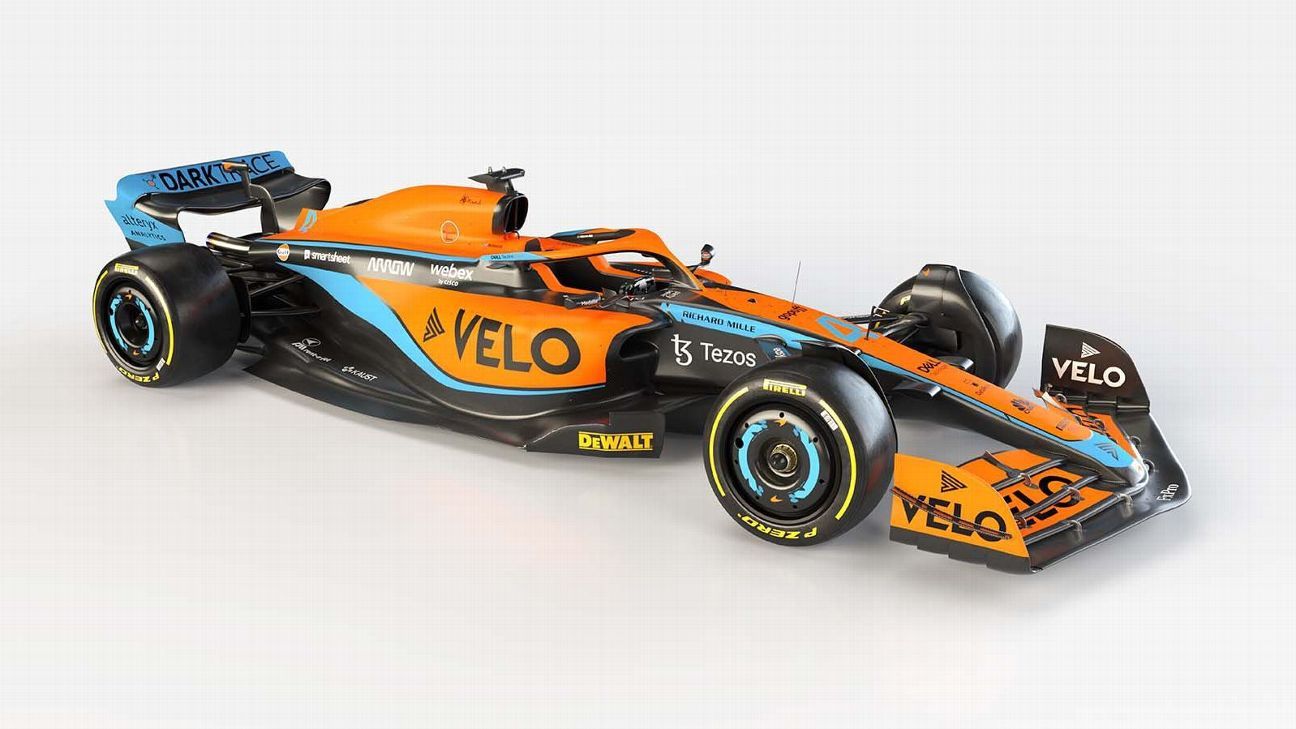 WOKING, United Kingdom — McLaren has launched its new car for the upcoming Formula One season.

The team’s drivers, Daniel Ricciardo and Lando Norris, took the covers off the McLaren MCL36 at a launch event at the team’s factory on Friday evening.

The new McLaren, which has been built to F1’s overhauled technical regulations, features a striking livery as well as a number of interesting design ideas that contrast with the Aston Martin F1 car that was launched the day before.

The car McLaren presented to the public on Friday is the same as the one that will hit the track at the first pre-season test in Barcelona later this month, although it is also due to take part in a shakedown before that test.

McLaren is hopeful that F1’s new regulations, which are designed to promote overtaking and have reintroduced ground effect aerodynamics to the sport, could offer the opportunity to return to the front of the grid on a more permanent basis.

“Over the last year the team have been hard at work developing the MCL36, seeking to take advantage of any opportunities we might find in the design and production of these new cars,” team principal Andreas Seidl said.

“Formula One and the FIA have done an important job developing these new technical and sporting regulations, which, in combination with the cost cap, aim to create closer racing and a level-playing field for competition.”

The car appears to follow a different design philosophy to the Aston Martin launched on Thursday as well as the initial renders of the Haas released last week. Technical director James Key said his team had considered the distinctive and louvered sidepods on the Aston Martin, but opted for its more narrowly packaged design.

“I think, first of all, it’s nice to see diversity in the space of three car launches, or real car launches so far,” Key said. “So it shows that some of the fears about all cars looking identical [under the new rules] isn’t necessarily the case.

“There are a couple of different philosophies there and it’s all around trying to solve the same problem, and it’s maybe that we see several ideas along the bodywork side of things that try to do the same kind of thing.

“The wider sidepod [on the Aston Martin] is not unfamiliar to us, we have just decided to tackle the same aerodynamic problem in a slightly different way. I guess what we will find out with these things is that there are probably different philosophies and ways of doing things as cars get launched, and there are going to be some trends that establish themselves over time — we will find that the different philosophies become commonplace, but to begin with it’s a bit of an unknown.”

But Key believes the competitive order will remain fluid throughout the year as teams improve on their initial designs, and suspects it is less likely one team will dominate.

“I think there’s so much development potential still in these cars — less of a philosophy behind how these cars work — which I think will emerge over time, and that means it’s never too late to catch up if you are on the back foot or, for that matter, drop back if you start well,” Key said.

Another standout feature of the MCL36 is its pull-rod front suspension layout, which is a departure from the push-rod designs that were common on the front of all F1 cars under the last set of regulations.

“It is a pull-rod front suspension, which is going to be pretty obvious when we run the car,” Key said. “You can’t really copy it very easily from this point forward and it will be interesting to see who else does that.

“We have seen that the Aston Martin is the other way around [push rod], for example. The whole front suspension layout is about aerodynamics, to be honest with you. It’s the only thing you’ve got to play with really between the entrance to the floor and the front wing.

“Depending on how you treat the front wing, and how the entry to the floor needs its flow conditioned, will set out what the best front suspension geometry is [for each car]. I think we are going to see some really interesting ideas across the grid with this, but for us it seemed like a good solution to try and it certainly has properties we are happy with.

“It was quite technically challenging, but we spent a lot of time trying to get that right and avoid the pitfalls of previous years when it was used, and I’m fairly confident it will work as expected.”

The MCL36 has a new paint scheme featuring a lighter blue reminiscent of the one-off Gulf livery the team used at last year’s Monaco Grand Prix. McLaren CEO Zak Brown said the thinking behind the new look was inspired by the positive reception to changes the team made last year, but was not linked to sponsor Gulf directly.

“We’ve been evolving our livery since we’ve gone back to papaya [orange],” Brown said.

“We wanted something that was very vibrant, so we changed the shade of our papaya, it’s a darker blue, but the livery changes we did last year in Monaco and Abu Dhabi we got a lot of great fan reaction, that they like to see a lot of energy, I think it’s got some nice speeded elegance to it that we thought would go on top of the fast race car that hopefully we’ve designed this year.

“So it’s a natural evolution and trying to make sure we give our corporate partners to stand out.”