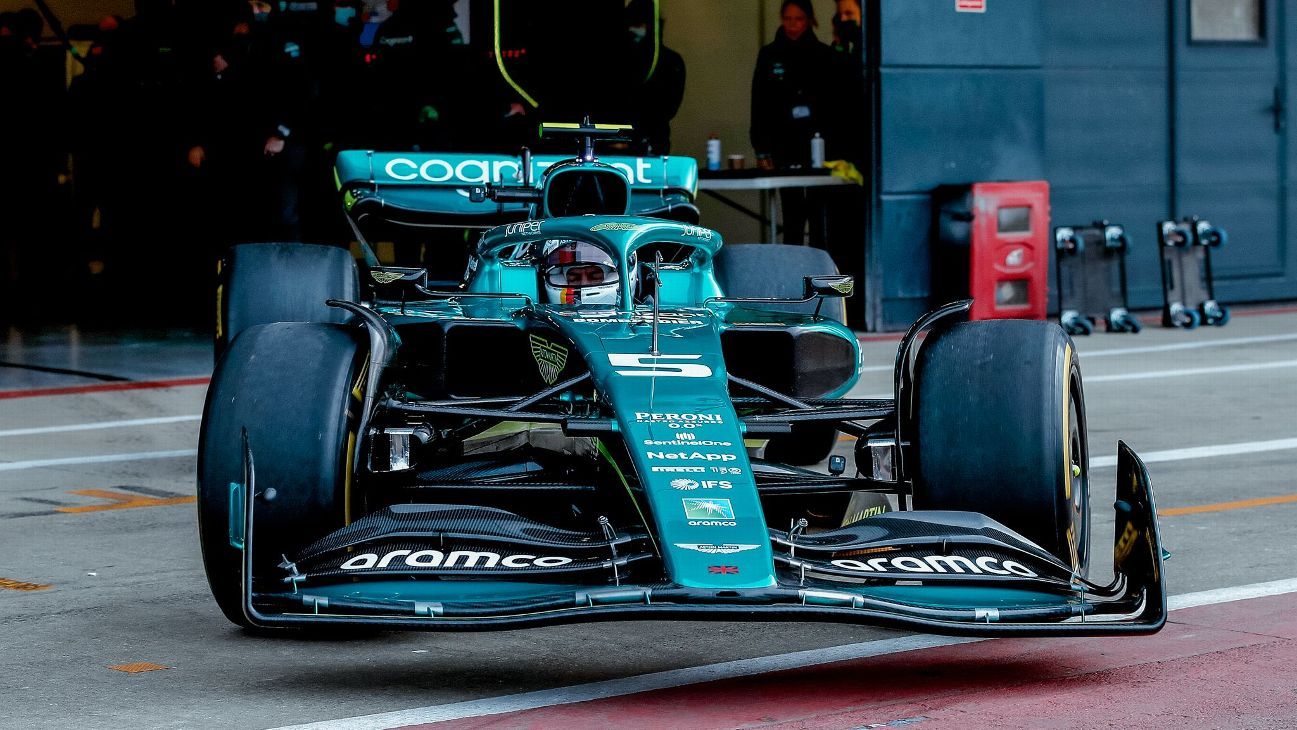 We’ve seen six of the ten cars (in some form) that will contest the 2022 Formula One season.

While Ferrari and world champions Mercedes are still to come, we’ve seen some striking differences in the three ‘real’ 2022 cars which have broken cover so far, while three teams have opted just to show us their new colour scheme (livery) for the new season.

Here’s a look at who did what so far and what we are expecting from the four final teams’ launch events.

What we’ve seen so far

Real thing or show car?: Digital render of an early stage of development

Haas timed its launch well in terms of getting out in front everyone else, launching its livery a week before the first three launch events had been scheduled.

As it has almost every other year bar the year when it went big on its Rich Energy title sponsorship — a deal which notoriously fell apart before the season was finished — Haas settled for a computer-generated image for its launch event. It meant the livery was the only thing of note and it wasn’t a major departure from last year’s. While it might not be the most exciting thing from a fan perspective it ticks all the boxes Haas wanted to tick at this stage. It’s low key but it got their car out before anyone’s else, rather than risking a rendered image getting lost in the middle of proper launch events.

Like several other teams, the first official glimpse of the car will likely be when F1 arrives in Spain for the first test.

Red Bull’s launch was more of a title sponsorship launch than a livery reveal or 2022 car reveal. But then, when you’re celebrating a new $500 million deal, why not? Red Bull’s new title partner is U.S. tech giant Oracle and the company’s name will be prominently featured on its car and driver overalls this year.

As is usually the case with Red Bull in preseason, the team will not show us anything real until the opening day of testing, so we will have to wait to see what Adrian Newey and co’s interpretation of the new regulations has been. Once out in the open, the car will likely continue to evolve in a big way until the Bahrain Grand Prix on March 20.

Although many online said the livery was identical to last year, there are some noticeable tweaks that have been made around the sidepod and engine cover. Red Bull also has a strong brand identity and one of the most striking liveries in the paddock — a classic case of if it ain’t broke, don’t fix it.

The launch also gave fans the chance to see Max Verstappen’s car with a number one on the front. No reigning champion has carried the number one on his car since Sebastian Vettel in 2014, with Lewis Hamilton always opting to stick with number 44 and Nico Rosberg retiring after winning the title in 2016.

The AMR22 was the first genuine F1 car to be revealed this year, and it didn’t disappoint. From the moment the Union flag cover came off, it was obvious the Aston Martin was something a little different and F1 Twitter responded appropriately with hundreds of heart-eye emojis.

The Aston Martin features a sidepod design unlike any of the concept cars released by F1 last year as well as a relatively high-riding nose and front wing arrangement — proof that not all 2022 cars have to look the same. Fifteen louvres are cut into the flat top of each sidepod, generating comparisons with cheese graters on social media as well as more genuine questions over the layout of the radiators and cooling system underneath the bodywork.

The team committed itself to a relatively early launch date so it had time to hit the track for a shakedown at Silverstone the next day and leave a long enough period to fix any teething issues ahead of pre-season testing. As a result, the AMR22 was the first new car to fire up and turn a wheel on a race circuit this year, looking just as good in motion as it did in the stills photography.

Those good looks are helped by the new livery, which features a more TV-friendly hue of metallic green while ditching the pink highlights of former sponsor BWT and replacing them with lime green stripes. The result is a paint job that is instantly recognisable as Aston Martin while complementing the curves of one of the most unusual cars on the grid.

McLaren followed up Aston Martin’s launch with a real car launch of its own, albeit with a few “sensitive” points covered up from the bulbs and lenses of the watching media.

In what is likely to be a recurring theme in 2022, the launch gave us a glimpse of a different design philosophy to that of the Aston Martin. Technical director James Key said his team had considered the distinctive and louvered sidepods its fellow Mercedes customer team went for, but opted for its more narrowly packaged design instead.

The team also opted for a pull-rod front suspension layout rather than push-rod suspension that was common on the front end of F1 cars under the last set of regulations. At the rear it switched to push-rod, away from the conventional pull-rod designs in F1 throughout the last decade, creating a stir among F1’s technical community.

On the livery side, McLaren split opinion. The team went for more Gulf blue to mix in with its traditional papaya orange colours and it certainly looked more striking in person than it did on any of the photos the team circulated afterwards.

AlphaTauri car launches have had a common theme since the clothing brand joined the sport as the new name for Red Bull’s junior team in 2020. They are partly about revealing a new racing car but they are as much about promoting the latest clothing lines from the Salzburg-based fashion house.

So it was no surprise that the launch video for the AT03 spent as much time focusing on the garments being modelled by drivers Pierre Gasly and Yuki Tsunoda as it did on the car itself. The accompanying press release made clear that the CGI model of the AT03 might not be entirely representative of the real-life car that will roll out on track in pre-season testing.

“The actual AT03 will make its first official F1 appearance at next week’s Barcelona test, but in the meantime the innovative [launch] video tells the story of the synergies between fashion and motorsport through three main pillars,” the blurb read.

“It starts with a Monolith in the CGI world, representing the team’s technology, state-of-the-art facilities, and know-how of the people who have produced the car.

“Each element then moves towards the second pillar, the Portal – signifying AlphaTauri and its technology – that ‘dresses’ the AT03, drivers and models, as they move into the real world, the World of AlphaTauri.

“This final pillar demonstrates the product of the partnership, where the ‘Style Of A New Era’ materialises across both fashion and F1.”

Anyway, if the design of the real-life AT03 is true to the one that emerged from the “second pillar” known as the “Portal”, it will be a fine looking machine that highlights another different approach to the problems posed by the 2022 technical regulations. And, as you’d expect from a fashion brand, the latest iteration of AlphaTauri’s blue and white livery looks sharp and fresh.

Real thing or show car?: Both!

Williams gave us the best of both worlds with their launch, showing a livery on a show car in the morning and then hitting the track with the real thing in the afternoon.

Once again, the proper car is a big departure from the other 2022 cars launched beforehand. The Williams features a different nose and sidepod design compared to the Aston Martin and McLaren cars, while it has gone for a different suspension set-up to the McLaren.

On the livery side Williams both embraced and made a break from the past. The team went back to the shade of blue most people associate with Williams and its dominant cars of the 1990s, but it also confirmed it has removed the tribute Senna ‘S’ logo from the nose of the car, something it has carried since the Brazilian triple world champion was killed in a crash at the 1994 San Marino Grand Prix.

Although the Williams family no longer runs the team, the ‘FW’ naming formula for its cars has been maintained — team founder Frank Williams died in November last year.

Ferrari, Mercedes and Alpine will launch their cars in the days before the first test starts at Spain’s Circuit de Catalunya next Wednesday.

Mercedes will show a glimpse of their 2022 car on Friday as they are conducting a shakedown day at Silverstone after the images of the car are released. The team is expected to move back to a predominantly silver livery this season after two seasons running an all-black car.

Alpine should have a revised livery, too, having announced a title sponsorship with BWT, who inspired Force India’s all pink car when it had a similar deal with that team several years ago. While Alpine is unlikely to abandon its brand colours to go fully pink, it will be interesting to see how much of it is on the car, especially given the fact Williams has opted for a very similar shade of blue this season for its own car.

Alfa Romeo is set to officially launch its car on Feb 27., the weekend after the first test in Barcelona, meaning it will have already had three days of track time by then. Images of the car carrying a black and white camouflaged livery surfaced on the internet following a shakedown at Ferrari’s Fiorano test track on Tuesday.