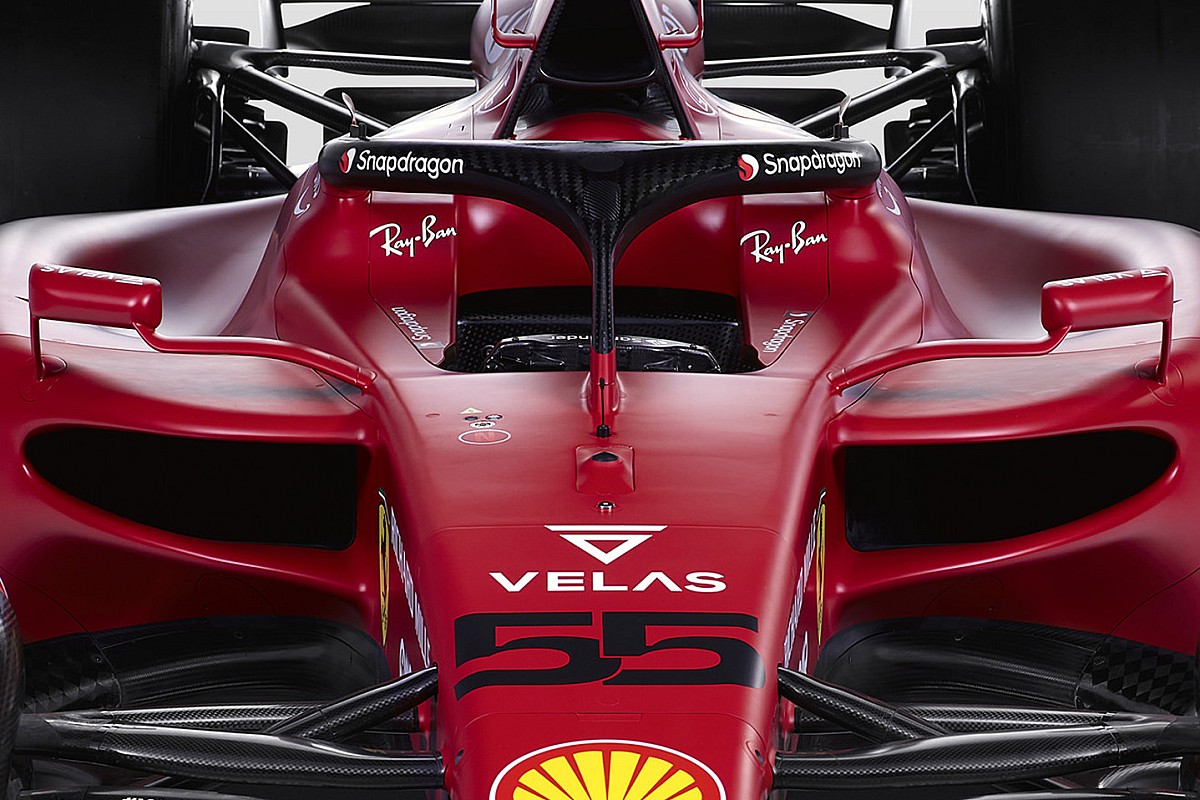 Let’s start at the front of the car and get straight into the innovations: Ferrari has opted for a four-element front wing, the maximum possible under the new regulations.

The nose is connected to all four elements of the wing but is a very slender design when compared with what we’ve seen elsewhere, not only in terms of the pointed nose tip but also the underside of the main body too.

The pointed nose tip follows the downward dip of the mainplane’s central portion, which will feed airflow to the underside of the nose and then onwards to the floor and sidepods. The nose is also constructed in a way that allows the Ferrari engineers to make changes throughout the course of the season without the need to pass another crash structure. 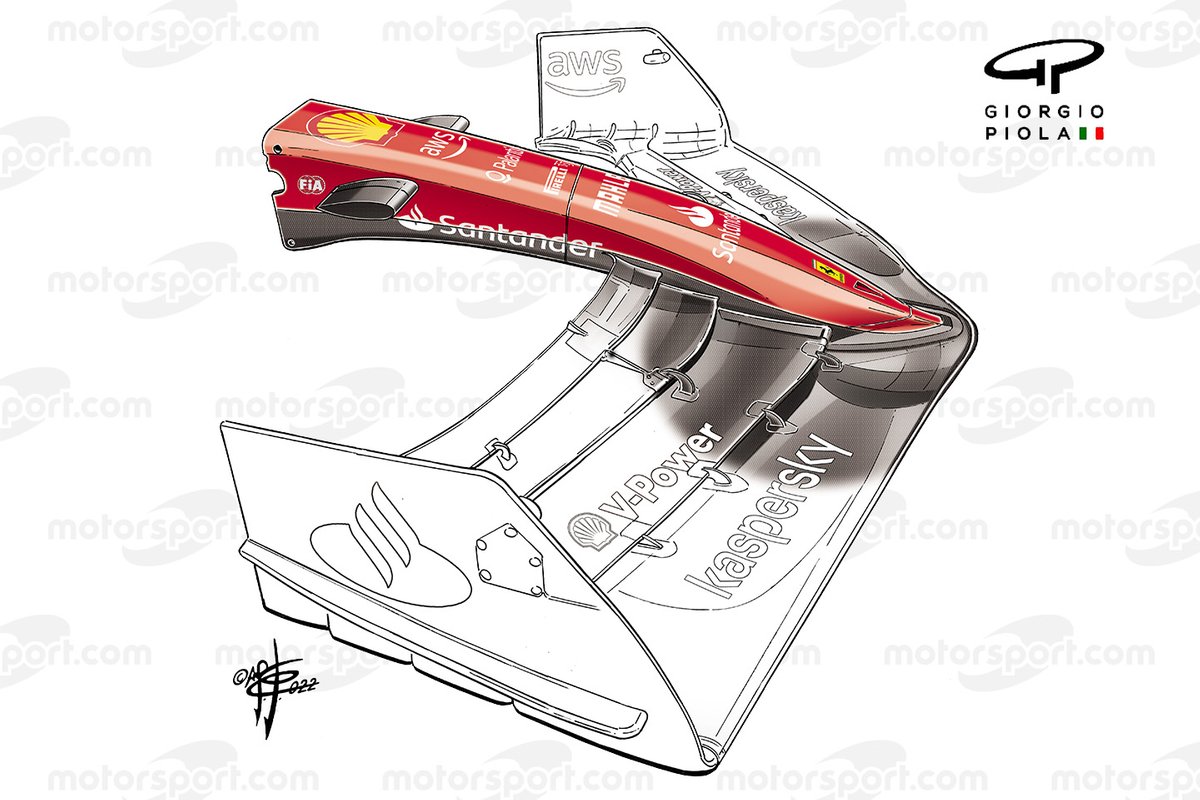 It’s hoped this built-in versatility will allow the team to be agile in the face of any modifications it might need to make in order to improve performance or should it wish to switch to a design carried by another team. A NACA-shaped duct is also employed in the tip of the nose and will provide cooling for the drivers.

PLUS: The apparent tributes to Ferrari’s history in its 2022 car

The Scuderia has opted for pushrod front suspension at the front of the car, even if there had been suggestion they may return to pullrod given its recent experience, having used it between 2012-2015.

The suspension and steering arms fairings have been positioned in order to offer the maximum aerodynamic performance based on the design of the front wing, floor and sidepods. The front brake duct and wake deflectors have been displaced from the tyres’ sidewall in an attempt to improve brake cooling and alter their influence on the airflow.

As with the other 2022 cars we’ve seen, Ferrari has used the regulatory freedom to come up with a unique approach to the sidepods’ design. In this respect the layout of the power unit’s ancillaries – such as radiators, oil coolers and electronics – housed within the sidepod have been orientated differently this year.

It has also been mindful that altering the internal makeup of the sidepods can have an impact on their external shape and how that can be used aerodynamically, especially when we consider the allowance of the cooling gills on their top surface once more.

The inlet is very slender and sits atop a rearward sloping undercut that’s unusually curtailed by the flat sided bodywork that then feeds around to a high waisted overhang that allows the airflow traveling around the lower surface of the sidepod access to the coke bottle region at the rear of the car. 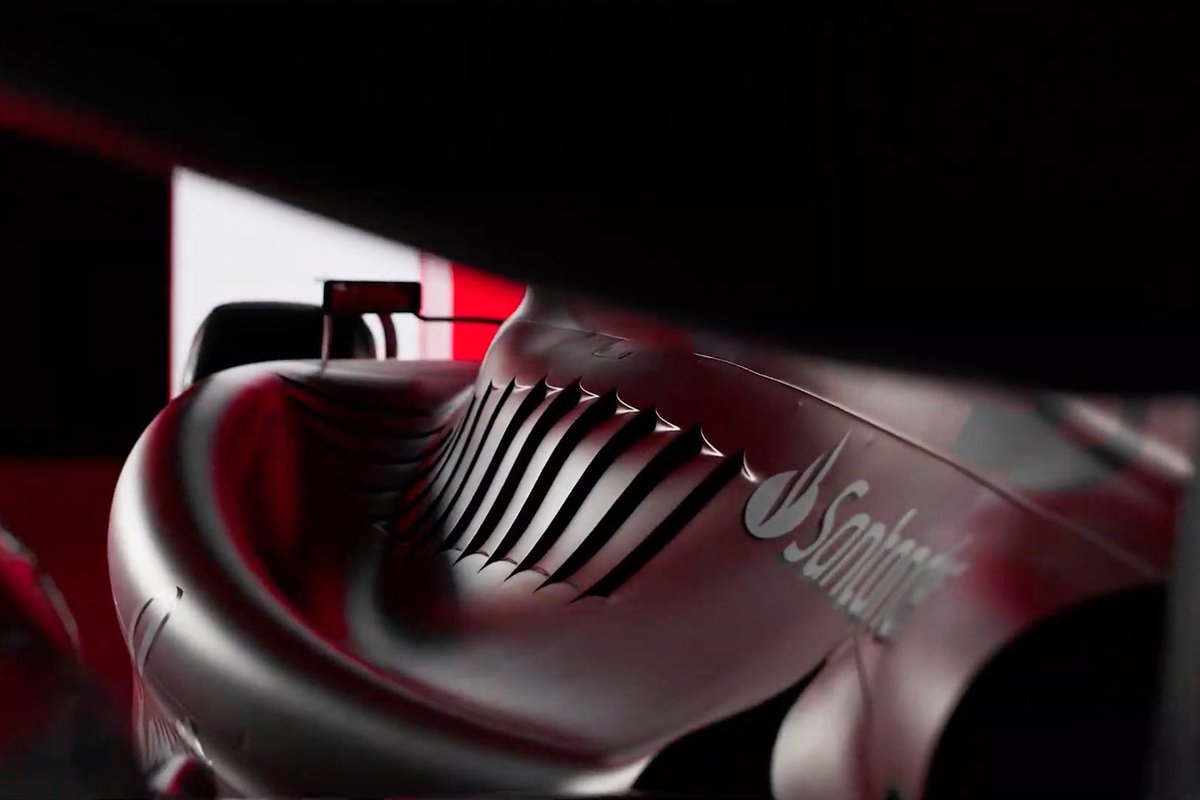 These design solutions, which seem somewhat alien when compared with the approach we’ve seen in the last decade or more, seem less visually intrusive when we take a look at the clamshell-like upper surface of the sidepod.

This deep crevice clearly serves a significant aerodynamic purpose, as the airflow is pointed at the rear of the car, with the Ferrari engineers not only taking advantage of the cooling gills but also the high sidepod wall to frame the flow direction and another cooling outlet ahead of the pullrod rear suspension to help minimise the size of the one in the centre of the car.

The F1-75 will clearly be designed around extracting the most performance possible from the new regulations that govern the floor, underfloor tunnels and diffuser.

And it’s the tunnel entrance we’ll concentrate on first, with the team opting for what you’d consider the conventional route of extending the leading edge of the tunnel all the way up to the chassis, rather than creating an additional wall like McLaren and Alfa Romeo have opted for. 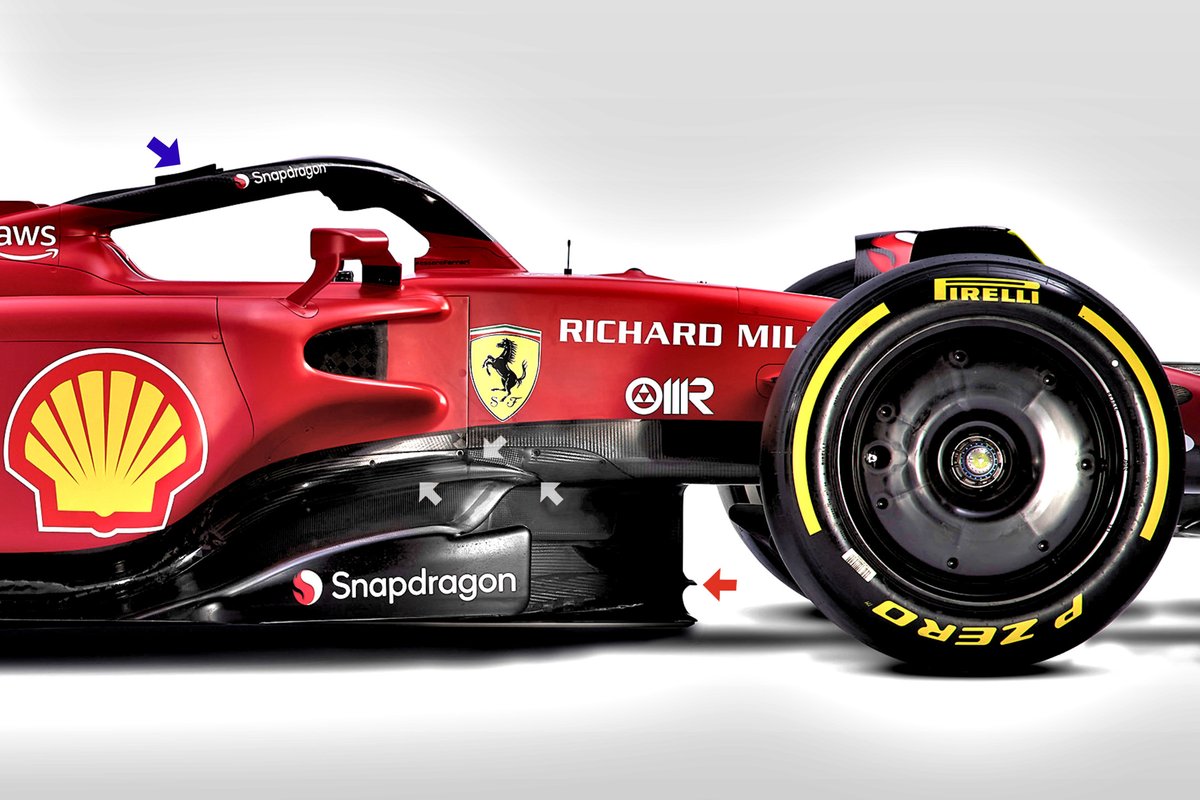 Where it does appear to differ from some of the other designs that have the full-height solution, is it seems to steal some real estate from the underside of the chassis to increase its width and improve the airflow’s route at their junction on the upper surface of the floor (white arrows). There’s a visible dip at the leading edge of the floor that aligns with the shape of the sidepod behind.

The F1-75 also features the snowplow-like wing above the main bib (red arrow), with the vertical splitter extending almost all the way to the front edge of the bib. The snowplow will undoubtedly cast its own set of vortices, with the team using them to tune the shape, position and strength of the vortex shed by the bib itself.

The outermost floor wake strake is not as tall on Ferrari’s challenger as we’ve seen from some of its rivals, with its height inline with the tunnel entrance, while it doesn’t extend as far out as the rules permit either. 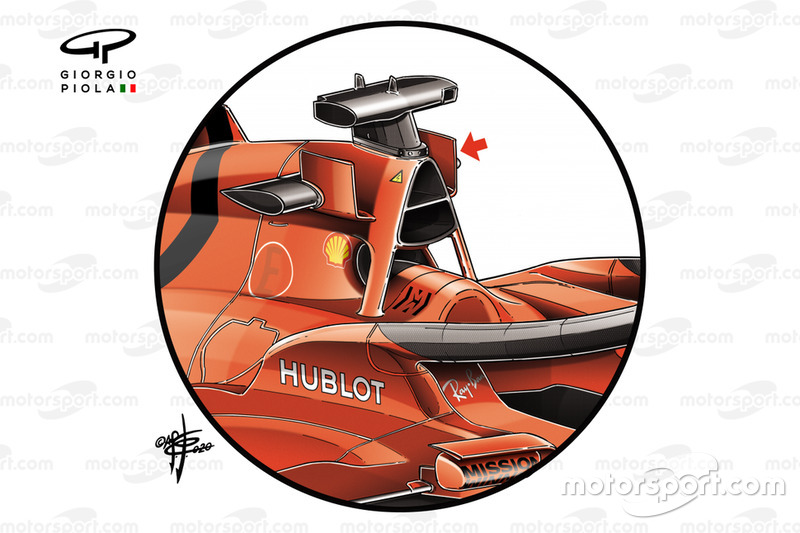 The triangular roll hoop and airbox, along with the ‘ears’ that the team introduced in 2020 (above) and provide an aerodynamic boost along the engine cover, also remain. The halo fairing has also been modified to include small winglets on either side, much like the layout employed by Aston Martin last season (blue arrow).

The rear wing pillar supports are of interest too, as they’re not the traditional swan-neck design, with the upper section above the mainplane abbreviated more so than usual. The beam wing shown is a double element solution with the outer sections tapered to create a much shorter chord in order to reduce the drag created. 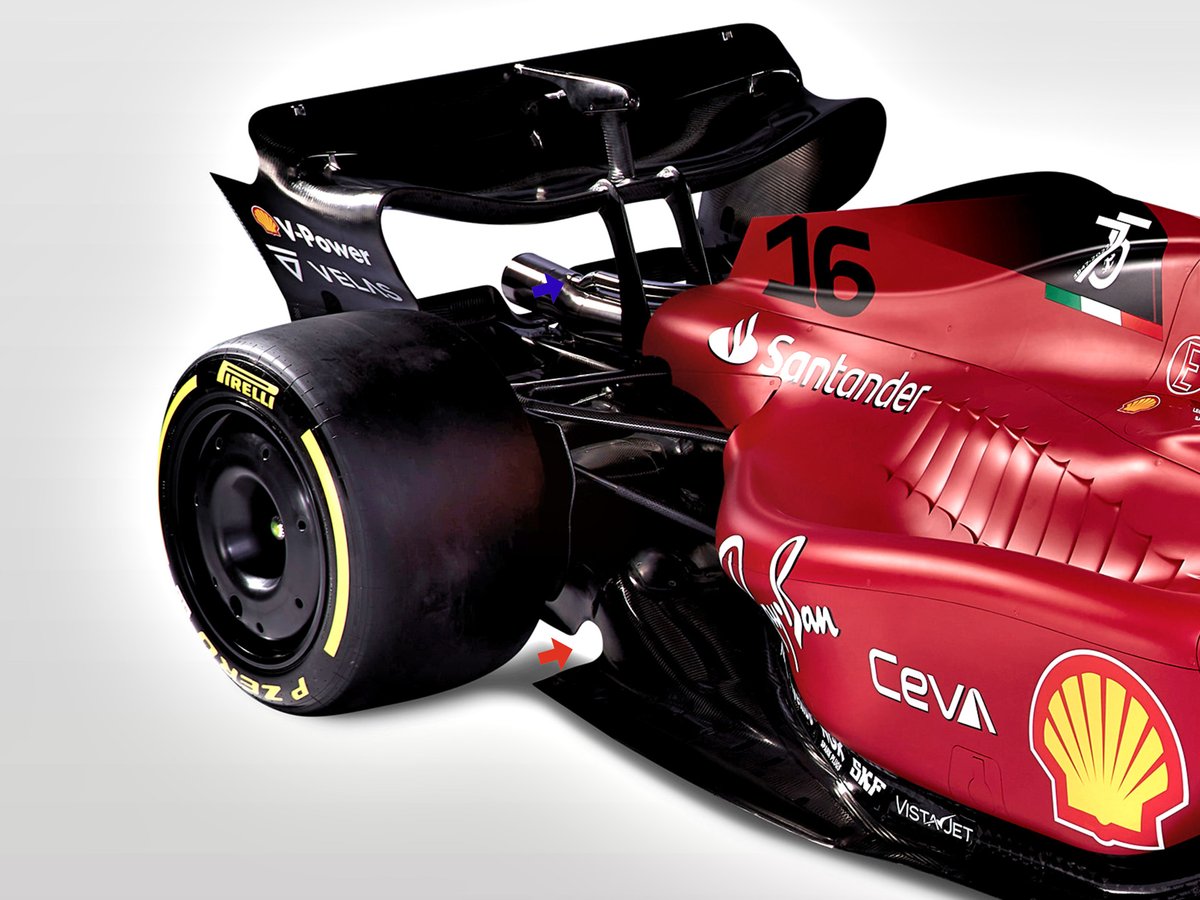 An unusual configuration for the wastegate and exhaust pipework has been chosen too (blue arrow), as where we have seen others connect the wastegate pipeworks to the main exhaust tailpipe upstream, Ferrari has opted to present it externally.

The ‘mouse house doorway’ in the diffuser’s sidewall that we’ve seen on some of their rivals’ challengers is also present (red arrow) and likely helps mitigate any flow instabilities created by any adverse junctions in the surrounding surfaces, which should in-turn improve the diffuser’s edge vortex.

The overall design philosophy used by Ferrari is probably best summed up by Fabio Montecchi, Head of chassis project engineering: “With no reference points available from previous seasons, what makes the difference is the creativity and talent of each designer, the excellence of our analysis tools, the lucidity and courage to choose the most promising solution, even if it’s not the most conventional.”

It’s also clear that the Ferrari F1-75 is the most complete car we’ve seen so far, but even given the team’s openness during the launch there’s bound to be aspects of the car it has attempted to conceal and which will be revealed over the course of the next two tests.