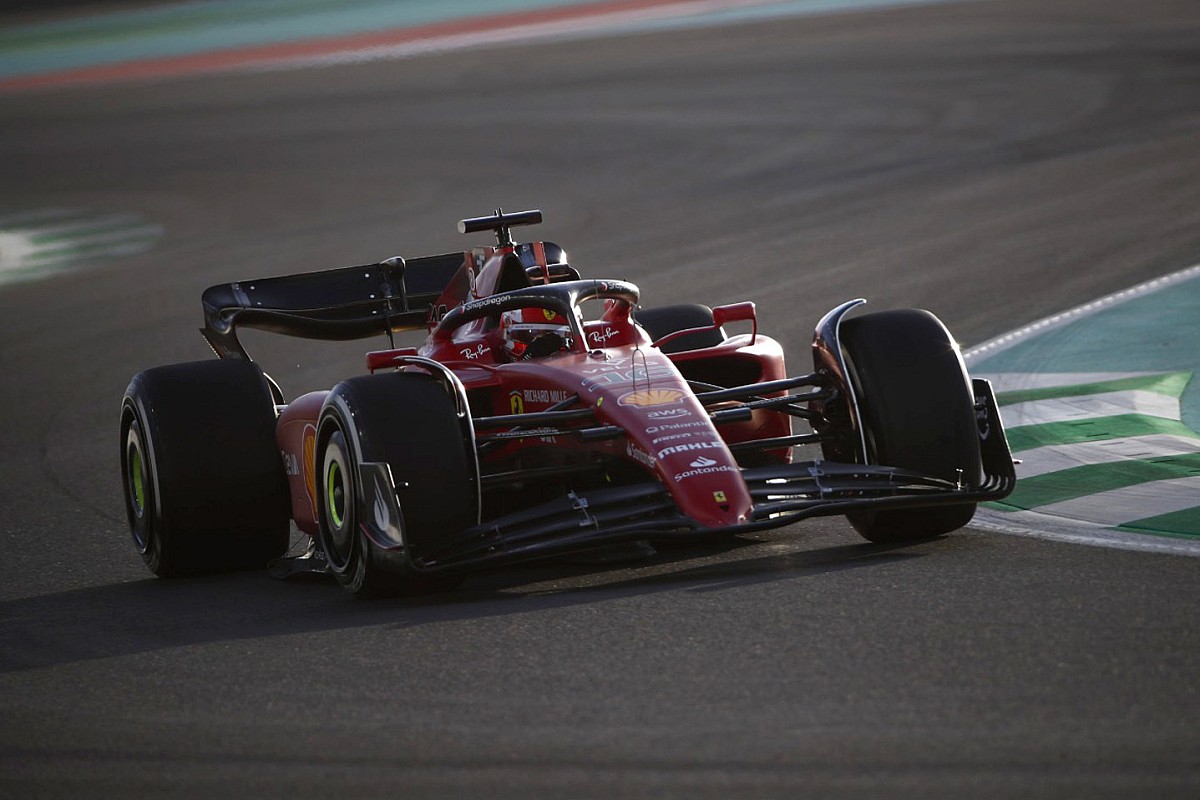 Fernando Alonso was the first driver to head down a very dusty pitlane in Jeddah, where the opening one-hour session was taking place in sunny but very windy conditions.

As Alonso pulled over to complete a practice start just as the pitlane exit light went green for the session’s start, Aston Martin pair Nico Hulkenberg and Lance Stroll therefore moved ahead and duly the set the initial quickest time a few minutes later.

Ahead of his timed lap, Verstappen had run deep and off the track at the final corner – the turn where the barrier has been moved back following his crash in qualifying there in 2021 – as did Alfa Romeo’s Valtteri Bottas and later Gasly and Lewis Hamilton, the latter pair with locked front right wheels.

The early running took place with the field split across the hard and medium tyres, with the Mercedes cars coming out for the early laps on the softs.

As the Red Bull drivers continued in their first runs, Perez improved to a 1m32.021s on the hards, before a few moments later Verstappen moved ahead again on a 1m31.885s using the same white-walled rubber.

Verstappen improved again to a 1m30.888s as the opening 15-minutes ended, just after which the session was red-flagged after the 50m brake marker board for the first corner had come loose and fallen off the right-hand side barrier before being clipped by Lando Norris, which meant debris was strewn across the circuit. 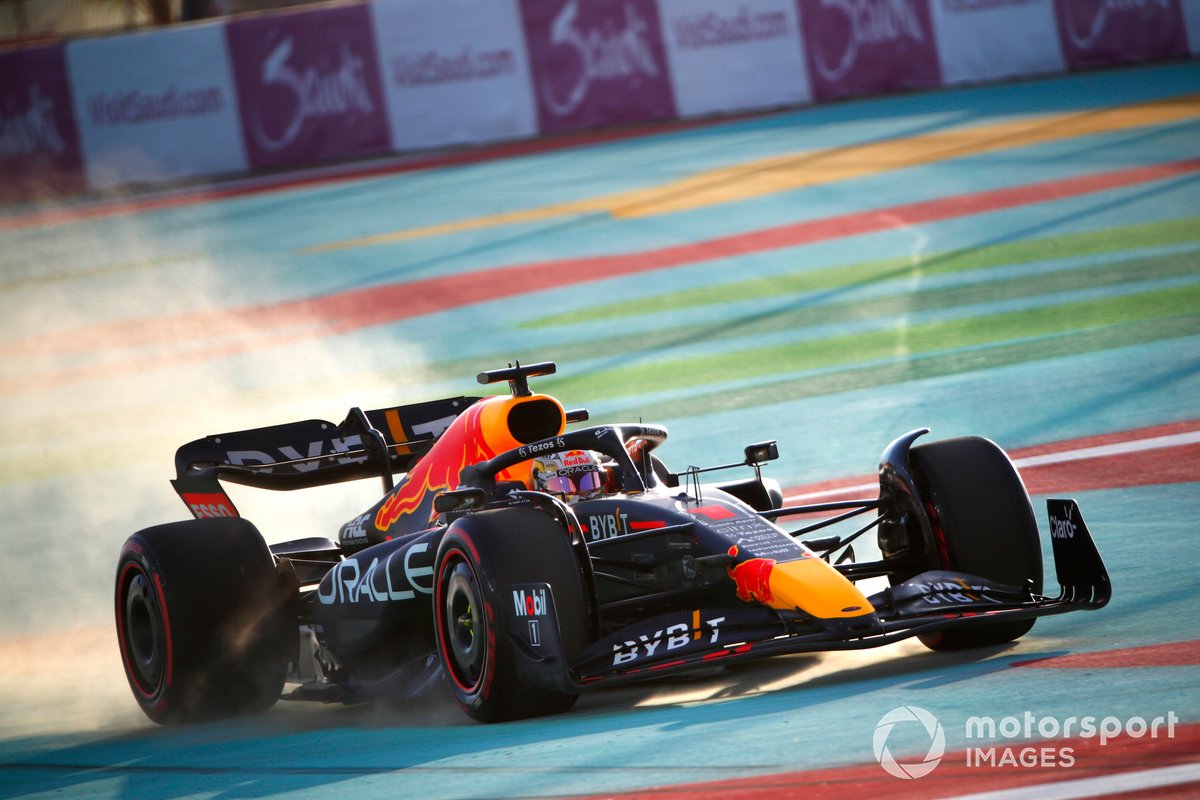 That took until nearly 25 minutes of the session had passed, after which the Ferrari drivers headed out of their garages for the first time in FP1 – matching the Red Bull drivers by initially running the hards.

But like the Red Bull pair, Leclerc set a series of personal best times with a lengthy opening run on the hards, getting to just 0.582s slower than Verstappen by the 40-minute mark.

At this point Verstappen had had a first go on the softs, which he abandoned after cutting the fast Turn 10 left in the middle sector – where Alonso spun in last year’s race – having lost the rear of his RB18 with a wind-impacted oversteer snap at the preceding right.

After a lull in proceedings approaching the final 10 minutes, Verstappen tried again with the softs, but did not improve his personal best set on the hards.

It looked as if that effort would stay as the session’s best, especially when the Ferraris only re-emerged to run the softs for the final five minutes and Leclerc could only get to 0.304s behind Verstappen with his first flier on that rubber.

But with two minutes to go the championship leader nipped ahead with a 1m30.772s – benefitting from a tow coming off Hamilton’s Mercedes as they raced out of the final corner on a lap that featured no best sectors of FP1 for Leclerc. 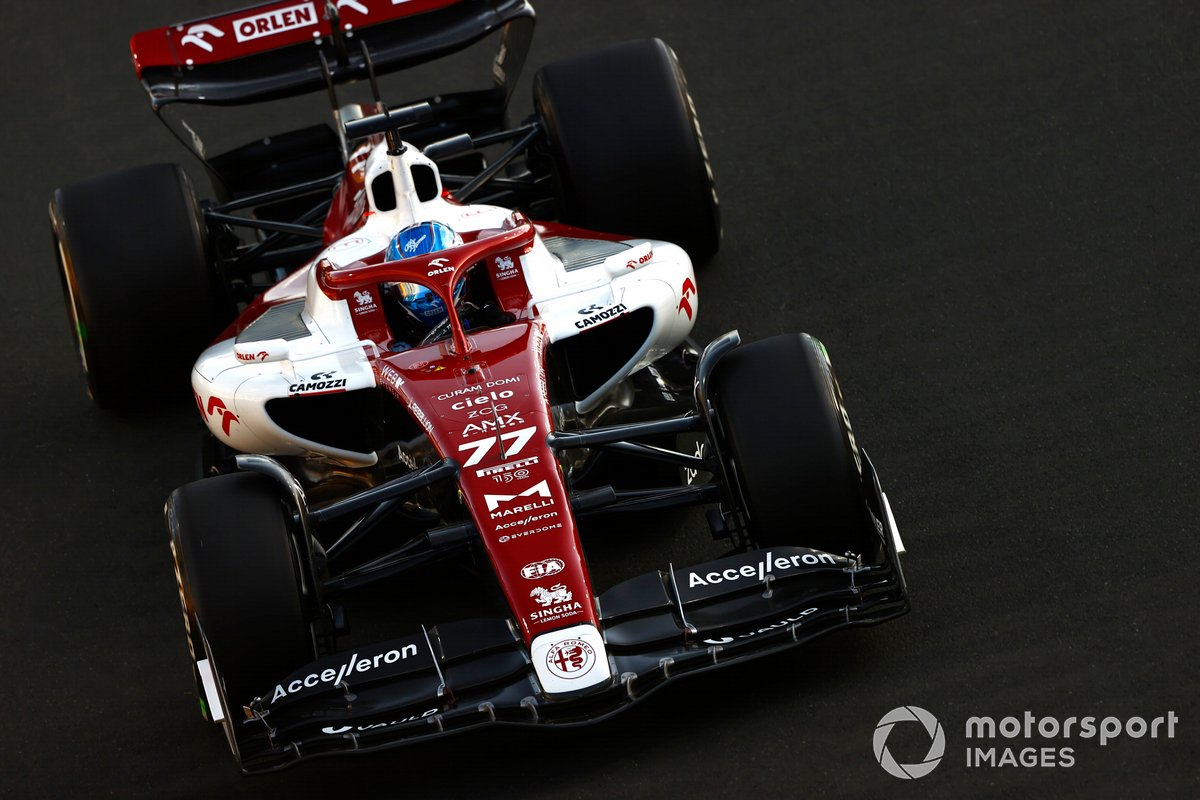 He did set a purple first sector in the final minute of the session, but abandoned that lap when he had a big slide through the Turn 16 right hander in the middle of the second sector.

Bottas finished with third fastest time – leaping up the order in the final part of FP1 has he ran just ahead of Leclerc on the Ferrari driver’s quickest lap.

Sainz ended up fourth, closing to 0.367s behind his team-mate with a similar late run on the softs, to edge out AlphaTauri pair Gasly and Tsunoda.

Then came Perez and Ocon, with Hamilton down in ninth as the lead Mercedes driver, reporting problems with continued porpoising problems and a late glance with the barriers.

Alonso, who is running with a different engine to the one he raced in Bahrain, which has been sent back to Renault’s Viry facility for inspection after a suspected sealing issue was discovered after last weekend’s race, closed out the top 10.

He will not face a grid penalty for the change.

George Russell ended up down in 15th as Mercedes tried different wing specifications across its cars in FP1.

The Haas drivers brought up the rear of the field, with Mick Schumacher’s best coming on the mediums and Kevin Magnussen not setting a time after hydraulic leak occurred on his car very early in the session, which required a radiator change that could not be completed in time to let him run again.

Schumacher will be involved in a post-F1 stewards’ hearing, as Williams driver Alex Albon (17th in the session) is being investigated for a possible impeding incident involving the two drivers, which took place at Turn 9 in the session’s final 10 minutes.

The session ended with plumes of smoke billowing across Jeddah to the east of the track, with unverified social media reports later suggesting an explosion had occurred near the city’s airport.