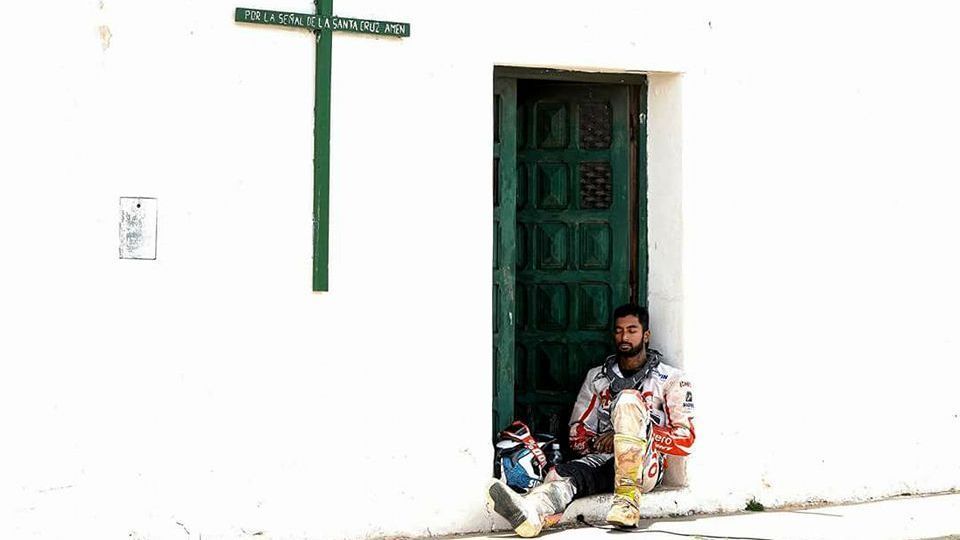 “What the hell is wrong with this guy?” CS Santosh often looked into the mirror and wondered. He had no broken bones, no visible scars. On the outside, he was a guy who appeared completely normal. Yet he couldn’t sit up without serious effort, couldn’t walk without support and felt inexplicably drowsy most of the time.

In January last year, Santosh, India’s first Dakar Rally rider, suffered a brutal crash. Going at roughly 135 kmph on a gravel track in Stage 4 of the Saudi Arabia Dakar, the 38 year-old Hero MotoCorp rider lost control, hit his head on a rock, fell unconscious, had to be resuscitated and was airlifted to a Riyadh hospital. He suffered brain trauma – Diffuse Axonal Injury – and was placed in a medically-induced coma for close to a fortnight.

Santosh woke up with double vision, a dislocated left shoulder and no memory of the crash that changed his life. He’s been fighting depression and trying to make sense of who he was and what he’s become.

“I looked at myself and went, ‘what the hell is wrong with this guy’? You know, I didn’t see myself as me. ‘You have no broken bones, you’re completely normal and you’re telling me that you can’t walk by yourself, are you kidding me’? I’d scold myself. To accept that something’s wrong with me was the first difficult step. The feeling of who I was had gone away. You always read of athletes being the strongest guys out there. The books and movies always tell you of the odds they’ve overcome. But some aspects are not known to the world. I never imagined myself being under depression. To address that with medication was another huge step. I didn’t know anyone else who’d experienced the sort of injury and challenges I did. There wasn’t much literature on it either,” Santosh tells ESPN, “I felt like the loneliest guy in the world.”

Months after his crash, he underwent rehab at the Isokinetic Centre in Bologna to regain his motor skills. “When I went home from the hospital for the first time, my house, my room and everything else felt unfamiliar. But when I sat on my Xpulse bike, and the wheels hit the floor, it felt like I’d done it yesterday.”

An athlete on Red Bull’s roster, Santosh then went to ride his rally motorcycle with navigation in Spain. “I wanted to show everybody that I was completely normal. But I was struggling and suffering. I thought, ‘Oh God, what’s wrong with me?” Red Bull Performance center then suggested he travel to Schulthess Klinik in Switzerland for cognitive tests. “I wanted them to tell me that I was completely alright and there was nothing wrong with me. That was my plan. But they told me everything was wrong with me. I failed all my tests.”

It wasn’t just his impaired cognition either. He had to deal with other baffling discoveries. “As a man, when you see a beautiful woman, there’s something that stirs within you.” Santosh pauses to gather his words, “All that went away. My testosterone was gone. I lost my sex drive. I saw women not as people of the opposite sex, but just as people. I think now I have the most amazing relationships. Most people don’t talk about these things, which is why I thought I should. No guy who goes through what I did should feel lonely.””

“I’m trying to function like a normal human being first”

In his battle to find himself, Santosh didn’t run into too many references of other athletes with a similar medical condition. “If you break your bones, it’s not the worst. But when you hit your head, the most difficult aspect is to understand what you need to do because every day is about recovery. Cognition is pretty much who you are in life. When that is affected, everything else too takes a blow. It’s a strange place to be stranded in.”

Two athletes whose experiences he could borrow from were former Finnish rally driver and World Rally champion, Ari Vatanen and MotoGP rider Marc Marquez. Vatanen battled depression after a horrid accident in 1985 that left him with multiple bone breaks while eight-time world champion Marquez has been dealing with post-crash double vision.

Over the past few months, Santosh has been piecing his life together like a jigsaw puzzle. He watched his own past Dakar rally videos in astonishment and often politely requests acquaintances for their photographs so he can attempt to string faces with memories. “When I watched my old rally videos after waking up from the coma, I was like, ‘wow this is incredible’. I couldn’t believe it was me.”

A week ago, he put together the third edition of his pet project – Red Bull Ace of Dirt – with over 60 riders competing on a specially laid course that consisted of motocross, dirt track and endurance racing elements.

Riders had to navigate a labyrinth of obstacles – slush pits, soggy clay pits, staircases made from the rear tires of earthmovers, dividers used on roads and a wall placed at a 45 degree-angle next to a bed of rocks, over two days at his Big Rock facility on the outskirts of Bengaluru. For the first time, the event drew four international riders including Sandra Gomez and Dakar Malle Moto winner Arunas Gelazninkas. “Because I couldn’t work on the various aspects of my life as an athlete, I threw everything I had into the Ace of Dirt this year,” Santosh says, “I want to turn it into an event that riders around the world will aspire to participate in, like they sign up for the Dakar. I want it to grow into one of those races.”

With the passage of time and progress in recovery, the one thing Santosh is certain of now is that he wasn’t in a bad dream. “The first few months, every day I’d tell my parents and my girlfriend, ‘don’t worry I’m imagining all these things’. I was pretty sure that I was sleeping in my camper someplace, dreaming all of it.”

Through his stretches of depression, Santosh immersed himself in history, trying to probe why the Dakar rally – riding thousands of kilometers of difficult terrain, usually cutting across countries – meant so much to him. “Because it is human nature,” he says. “A small group of people got together in Africa, it’s assumed that’s how humanity originated. Migration has always been a part of us. It’s because every day when you wake up, the fact that you don’t know what’s going to happen, and that there’s so much that can happen in a single day was pretty much how anybody lived 10,000-15,000 years ago, right? That’s why I love the Dakar. It addresses my human need of wanting to migrate. I want to be able to live every day with a lot of possibilities.”

Santosh has been living at his Big Rock Park in Kolar, away from the bustle of Bengaluru. He’s trying to navigate the basics of everyday life without tripping up and often rides his XPulse to neighboring villages. “I’m trying to function like a normal human being first,” he says, “Four months ago when I’d meet friends, I’d be so tired even after a conversation, I would go to sleep. Recovery is taking longer than I’d expected and doctors have been asking me not to be not to go too hard on myself. It’s getting better every day with how much I can process and behave like a normal guy,” Santosh says, “I now remember how I was and who I was. I’m trying to get the physical aspect of me at least working. Then hopefully, the cognition powers will return.”

Even with his world tossed about and upturned, Santosh’s love for what he does hasn’t wavered. He doesn’t look at a horrific crash and a back-from-the-brink-of-death episode as cues to leave behind the perilous version of life he rides.

“To me, the Dakar is not just a race,” he says, “The only motivation I’ve had since I’ve been in bed is wanting to have my life back. My life basically means racing my motorcycle in the desert. It’s pretty much what I remember of my life. I want that back.”