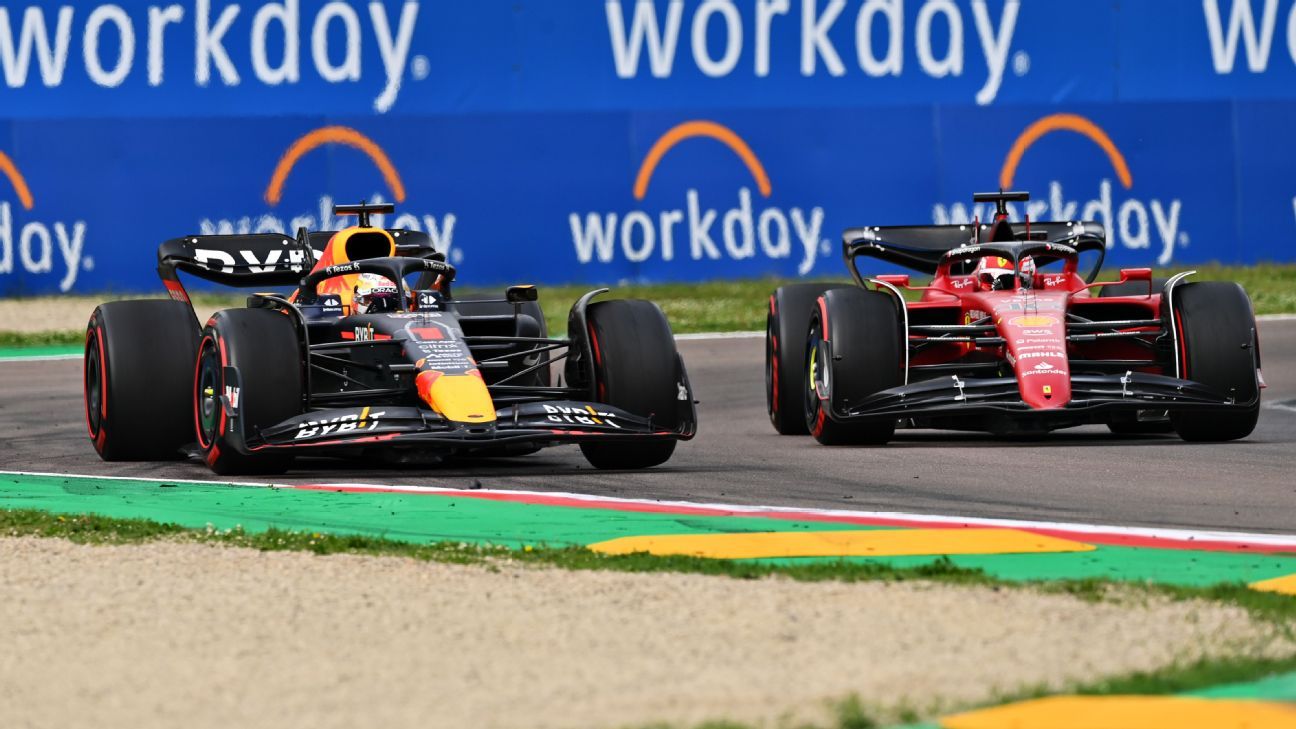 IMOLA, Italy – Max Verstappen and Charles Leclerc‘s late battle for victory at the Emilia Romagna Grand Prix’s sprint race was the icing on the cake for Formula One boss Ross Brawn, who is already planning to roll out the format at twice as many races in 2023.

Imola’s race is the first of three this season to feature the sprint qualifying format, with reruns to follow in Austria and Brazil. It sees traditional qualifying shift to Friday to set the grid for a shorter event on Saturday, which in turn sets the starting order for Sunday’s grand prix.

Sprint qualifying was used at events at Silverstone, Monza and Interlagos in 2021 and F1 had hoped to double the number for this year, only for teams to push back over concerns around costs.

Saturday’s sprint featured plenty of passes as Sergio Perez and Carlos Sainz fought through the field while other drivers held on to degrading tyres in the closing laps. It was not settled out in front until Verstappen reeled in Leclerc and passed the championship leader at the start of the penultimate lap with the aid of the Drag Reduction System overtaking aid.

“Very pleased,” F1 motorsport boss Brawn said on Saturday afternoon about the sprint. “Great entertainment, lots of racing going on, plenty of overtaking, we demonstrated the cars could follows. I know you may say ‘well it was DRS’ but you can’t use DRS unless you can get on the back of the car, so I think overall it was very successful.”

Brawn and F1’s team bosses will discuss increasing the sprint allocation from three to six in 2023 next week.

“We’d like to have six next year,” Brawn said. “I think [team bosses] can see the success.

“We didn’t quite know where we were last year with the old cars but I think they can see the way this is feeding into the new cars. I’m optimistic they’ll all see the value in it. Even the fans. What you should always remember about the sprint is it gives you a great Friday as well. We’ve had three days of action for the fans and we can’t ignore that.”

Not everyone is convinced. Mercedes driver George Russell, who laboured to 11th position in the team’s underperforming W13 car, said the race should be at least 50 percent longer to allow tyre degradation to play a bigger role in determining the finishing order.

Brawn said the fights in the top half of the order showed this had happened enough and that it is natural for drivers at the back to complain.

Referring to his days as boss of a team, Brawn said: “Whenever my drivers had a bad car, he’s complained about the race. I think George’s opinion, or the opinion of anyone at the back of the grid, is not the opinions you really listen to. The opinions we listen to are the guys are really racing and are racing at the front.

“They’re in a very unfortunate position but I don’t think their position at the back of the grid is really one reflects the true position of racing.”

“I just know from my own experience that psychologically a driver at the back of the grid has all sorts of things going on. It would be great if there were things going on at the back but we had a Mercedes that couldn’t overtake the cars in front. But there was plenty of overtaking in the middle and the front.

“Of course we will listen, we won’t ignore it, but you have to keep a perspective on it.”

Patient approach pays off for Max

Having lost the lead to Leclerc almost as soon as their cars started rolling off the grid Verstappen waited patiently for 20 laps.

Backing up what Brawn would later say about the tyre degradation, Verstappen said catching and passing Leclerc late on was down to his tyres being in a better state and waiting for the right moment.

“Charles was definitely struggling more with the graining,” Verstappen said. “Then of course, I could close up and use the DRS to get by. But I think it was more just of a bit of a waiting game, because every lap it seemed like the gap or the difference between the two cars was getting bigger in terms of a lap times.

“It’s a very tricky once you get around that one second window to get super close With these cars, it is better to follow. But it’s still very hard to pass. You still need to use the tyres and especially with the deg we had on the soft, getting in that DRS window, it was hard.”

Despite passing Leclerc late on, Verstappen only gained one point on the early runaway championship leader.

Under revised rules for this year, the top eight finishers get points — points had only been on offer for the top three in 2021.

Verstappen will start ahead of Leclerc on Sunday afternoon, with respective teammates Perez and Sainz directly behind, which should set up a fascinating duel for victory and the podium places.

Ferrari is hoping for a first win at Imola, the closest F1 race to its fabled headquarters at Maranello, since Michael Schumacher’s in 2006.