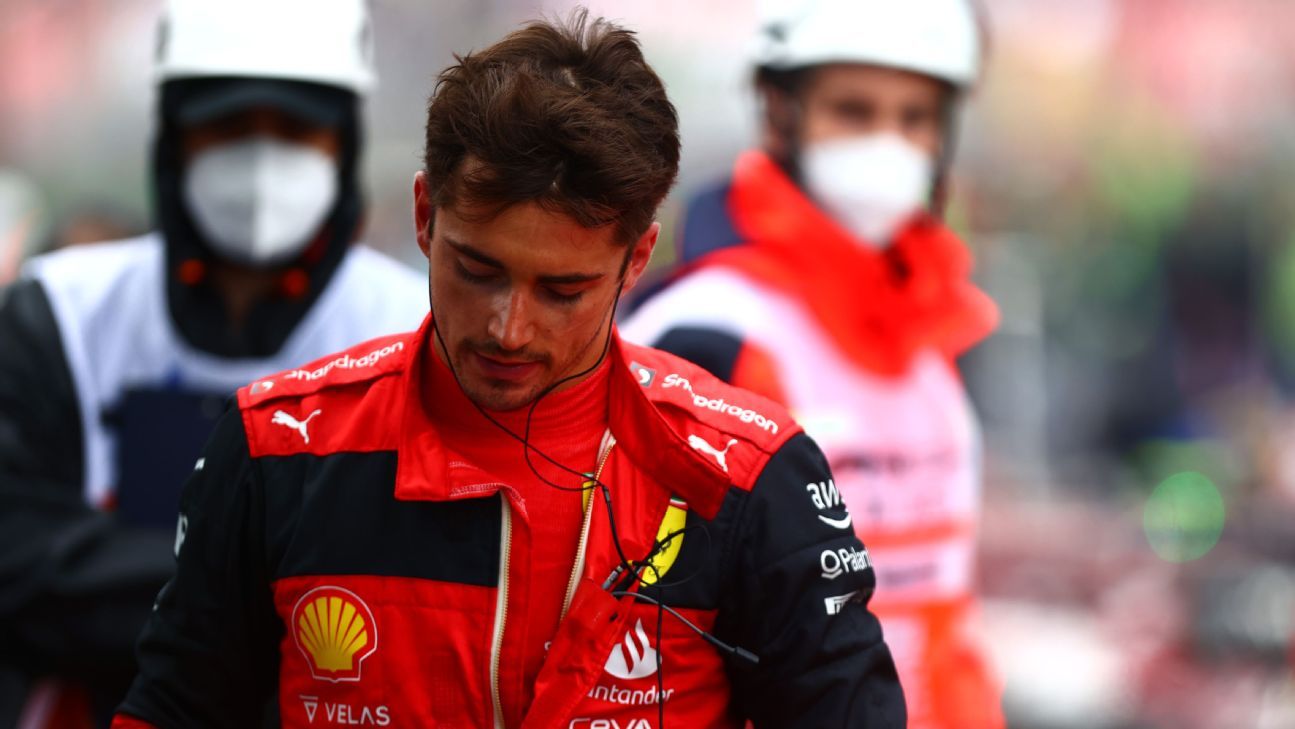 IMOLA, Italy — Ferrari will be reluctant to admit it, but the pressure ratchets up when it races on home soil. The expectations of victory are always significantly multiplied in Italy and the cost of mistakes become massively amplified.

It’s a pressure no other team in F1 faces. Individual drivers may feel extra pressure when they race in front of their home crowd, but no team carries the hopes of a nation in the same way Ferrari carries Italy’s.

It’s impossible to directly link that weight of expectation to the mistakes made by Ferrari drivers Charles Leclerc and Carlos Sainz in Imola over the Emilia Romagna Grand Prix weekend, but it does make the missed opportunity all the more galling for a team that has always run on a heady mix of emotion and passion.

“Certainly the expectation levels were very high here in Italy and we tried to calm them down,” team boss Mattia Binotto said on Sunday evening after Ferrari left Imola with just 20 points from a potential 59. “We did whatever we could internally in the team to try to relieve the pressure and make sure that we stayed concentrated and focused over the weekend.”

Ferrari has only won once in Italy in the past 12 years, thanks to Leclerc at Monza’s Italian Grand Prix in 2019, and Imola seemed like the perfect opportunity to reward the its loyal following with another home win. At the previous round in Australia, the team was looked unbeatable as Leclerc took zero risks on his way to his most comfortable victory of his F1 career, but in Imola it was different.

Sainz’s weekend got off to a bad start when he spun in qualifying and damaged his car so badly that he couldn’t take part in the pole position shootout. He later said the accident was not down to pressure and that he was simply experimenting with different lines through the Rivazza corners, but the mistake put him on the back foot for the rest of the weekend before he was ultimately taken out of Sunday’s grand prix in a first corner collision with Daniel Ricciardo.

During Saturday’s sprint race it also became clear that the track layout and mixed weather conditions at Imola appeared to favour Ferrari’s rivals Red Bull. Leclerc did well to take the fight to Max Verstappen in the 21-lap sprint on Saturday, but over a full grand prix distance Red Bull had the edge.

During Saturday’s sprint race it also became clear that the track layout and mixed weather conditions at Imola appeared to favour Ferrari’s rivals Red Bull. Leclerc did well to take the fight to Max Verstappen in the 21-lap sprint on Saturday, but over a full grand prix distance Red Bull had the edge.

As a result, Ferrari had to get inventive with its race strategy after Leclerc dropped to third behind both Red Bulls at the start of Sunday’s grand prix. With 15 laps remaining, the team pitted him from third place in the hope that a fresh set of tyres would give him a better chance of attacking the two Red Bulls ahead. At first it seemed like Ferrari might be taking the stop as a precaution after Leclerc struggled with front tyre issues in the sprint race, but team boss Mattia Binotto said it was purely an attempt to mix up the race and put pressure on Red Bull..

“No, we were not running out of front tyres,” he clarified. “I think that at that part of the race the pace of Sergio Perez was similar or slightly better than Charles, so we believed there was no opportunity for us to attack and overtake with those tyres anymore.

“So we did the pit stop to try to hope they [Red Bull] would stop as well so that we were both on new tyres to reset the race with 15 laps to go. It worked pretty well because Charles was pretty close to Sergio when he tried to attack and before he made the mistake.”

“The mistake” saw Leclerc take too much kerb at the Variante Alta and spin his Ferrari into the barriers. The accident damaged all four of his tyres as they scrubbed across the track surface as well as the front wing, which made contact with the outside wall. Leclerc pitted for a new set of tyres and repairs, dropping him to ninth before he rallied back to sixth at the finish.

“It is a big shame,” Leclerc said after the race. “Whatever happened before the spin it’s how it is, it’s part of racing you know, but I believe that the spin should not have happened today.

“I mean P3 was the best I could do, we didn’t have the pace for much more. I was too greedy and I paid the price for it and lost seven potential points compared to my third place I was before.

“It is a shame, it’s seven points that are valuable at the end of the championship for sure. This shouldn’t happen again.”

After the race there was an argument that Ferrari was trying too hard to chase a result that wasn’t on the cards, but Binotto made no apology for the aggressive approach. Leclerc was within 0.5s of Perez when he made the mistake, and had he got a good run out of the Variante Alta by attacking the kerbs, he may have been able to remain close enough to Perez through the two Rivazza corners to attempt an overtake on the pit straight.

“I think there will never be regret for asking a driver to push,” Binotto said. “I think that is part of our job, it is part of our job to drive to the limit but obviously these things can happen. I think these cars are a lot stiffer and if you make a small mistake you are paying quite a lot. But no regrets. I think we made the right choice and that’s it.” Binotto remained adamant that the pressure of the occasion in front of Ferrari’s home crowd had not been a factor in Leclerc’s error.

“While they were driving I don’t think pressure was a factor for the drivers, because while they are driving they are trying to do their best. Obviously we are fighting for the best positions and we know that we are leading the championships, but when I was hearing Charles on the radio in the races he was very calm.

“He was very calm and I think the way he was managing it was certainly not feeling the pressure itself, so I think it was being a genuine mistake that can always happen — a small mistake that cost him some positions and I’m pretty sure that he is aware of that and that’s good enough.”

Leclerc still in control of the title race

One of the most impressive things about Leclerc is his openness in talking about the mistakes he makes. Over the past two years while Ferrari have struggled for performance he has made a number of small — sometimes costly — errors, and they were a significant factor in teammate Sainz beating him in the championship standings last year. On Sunday evening he was already analysing how he would change his approach to avoid a similar incident at an upcoming race.

“It’s again a mistake, but I’ll learn from it and won’t do it again.

“And with the mistake I’ve been a bit lucky because I’ve only lost seven points to what I could’ve scored. But it’s seven points that could be valuable at the end of the season, and every point counts when you are driving for the title. So yeah, it won’t happen again.”

Despite the mistake, Leclerc still has a 27-point lead in the standings and there are no guarantees Red Bull’s advantage in Imola will still be in place when F1 races in Miami for the first time.

“It’s always difficult to tell who has the fastest car,” Leclerc’s championship rival Verstappen said after taking maximum points in Imola. “Every track is different. If you looked at Melbourne, we were definitely not the fastest.

“At the end it’s details, you know, you have to always make sure that you have a good balance in the car. You can have the fastest car, but if you have a bad balance, it’s not working or you have to look after your tyres, and these kind of things are very crucial with these new cars.

“And Miami, again, will be a big question mark. It will probably be a bit hit or miss for some people. Hopefully of course, we will do well, but you don’t know at the moment.” However, Verstappen would have taken the lead of the championship this weekend had reliability issues not stripped him of two second place finishes in the first three races. It’s a reminder of how costly mistakes, from team or driver, will be over the course of the season.

“I still feel like we are there more or less, and it’s track-dependant who of the two is coming out on top. So I don’t think there are any significant differences yet, but yes, they were a bit stronger than we were this weekend.

“All points count and today I’ve lost seven points against the 15 that we had if we were finishing third. Every point is important, I will learn from this for the future. It’s the way it is now, I’ve analysed the data, I know what I’ve done. I’ll move on.”