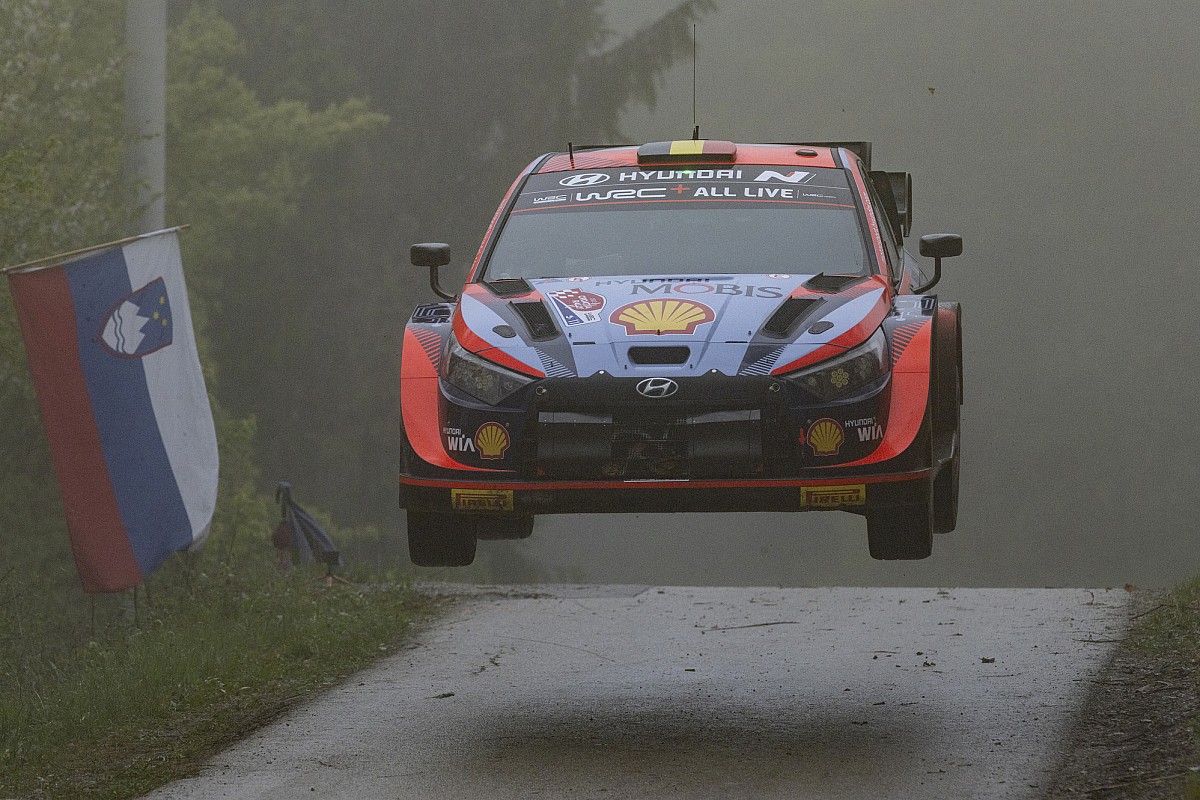 Neuville entered last weekend’s rally ending power stage on course to net third position when he misjudged a right hander resulting in his i20N firing bonnet first into a ditch. The force of the impact pitched the car high into air and almost into a spectacular flip.

Luckily the car landed on its wheels but with punctured front right and left rear and damage to the front of the vehicle.

Neuville had already lost his intercom before the incident meaning he had to rely in hand signals from his co-driver Martijn Wydaeghe to reach the end of the stage.

The pair managed managed to salvage third with a 46.3s margin over M-Sport’s Craig Breen in fourth.

“To be honest, no,” said Neuville, when asked if he thought he would lose the podium after the crash.

“I didn’t know where the car had gone. I knew there was the ditch and I tried to save the car, but you know how it goes.

“It looked very spectacular, but from the inside it wasn’t that spectacular and I got away with only two punctures. Luckily only two because if not it would have been difficult to reach the service.”

The final stage crash was the latest of string of incidents for Neuville in what proved to be a highly eventful rally. Neuville and Wydaeghe accumulated two minutes of penalties across the three days after several incidents.

After Stage 4, Neuville had been 12.5s behind leader and eventual winner Kalle Rovanpera but an alternator failure required the car to be pushed 800 metres into service, arriving four minutes late, incurring a 40s penalty.

The pair were then handed a one minute penalty, €1,900 fine and two days public service after being clocked driving at 156kph on an 11km road section limited to 80kph following Stage 4. The penalty demoted them from second to fourth overall on Saturday morning.

Hyundai lodged an intention to appeal the penalty on Saturday with the deadline to lodge a formal appeal this evening.

Neuville then suffered an engine problem on stage 13 and were late out of service again due to hybrid issue, incurring another 10s penalty, with another 10s added for failing to run on EV power in the service park.

“Challenging, emotional, very up and down weekend,” reflected Neuville, who sits 29 points behind Rally Croatia winner Rovanpera and championship leader.

“Lots of frustration and sometimes a bit of joy as well, like this morning when we were able to catch back the third position which was our main target after the several issues of the weekend. So I’m happy to be here now, even if we lost three possible points on the Power Stage. That’s the only thing me and Martijn gave away this weekend.

“Despite the issues, we never gave up. We fought hard and at the end the team has been rewarded with a 2-3 result, and strong points for the manufacturers’ championship.”