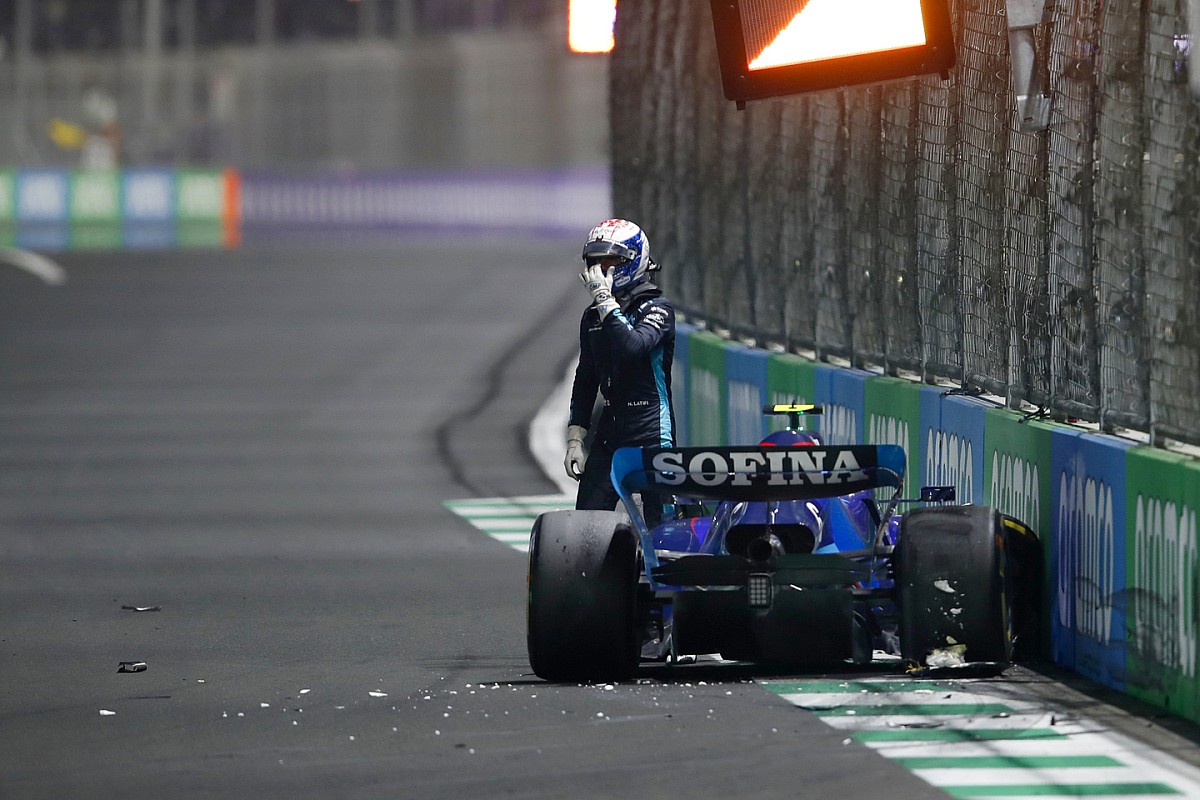 He’s so far been overshadowed by new team-mate Alex Albon, having found it harder to adapt to the new car than the former Red Bull man, and also endured a series of accidents that have obliged the team to focus as much on replenishing spares as on readying updated parts.

It was all looking so much better for him last year. The Canadian gained some real momentum in the latter half of the season, often giving team-mate George Russell a hard time. When Williams made its breakthrough with a double score in Hungary, it was Latifi who finished seventh, just ahead of Russell.

But his 2021 campaign ended with the late race crash in the Abu Dhabi Grand Prix that triggered a safety car and turned the world championship battle on its head. Subsequently, he was subject to criticism and even death threats on social media. That would have been hard for anyone to deal with, and certainly played on Latifi’s mind heading into 2022.

The last thing he needed was more accidents. But after a disrupted pre-season, he crashed in qualifying and again in the race in Jeddah. There was another major incident when he collided with Lance Stroll in qualifying in Australia, although his countryman took the blame from the FIA stewards.

All drivers have had to adjust to how the 2022 ground effect cars behave, which hasn’t been an easy process for Latifi – particularly given that the Williams appears to have lost competitiveness compared to last year.

“I think it’s a heads game, isn’t it?,” his team boss Jost Capito noted in Imola last weekend. “He’s capable to drive very fast and do the same lap times as Alex if he is in the right place, I’m sure.

“The cars are a bit more difficult and trickier to drive than last year’s, and he has to get his head around it. Of course, if you have a couple of offs you have to find again the confidence. But he will get the full support of the team, and we are sure he will get there.” 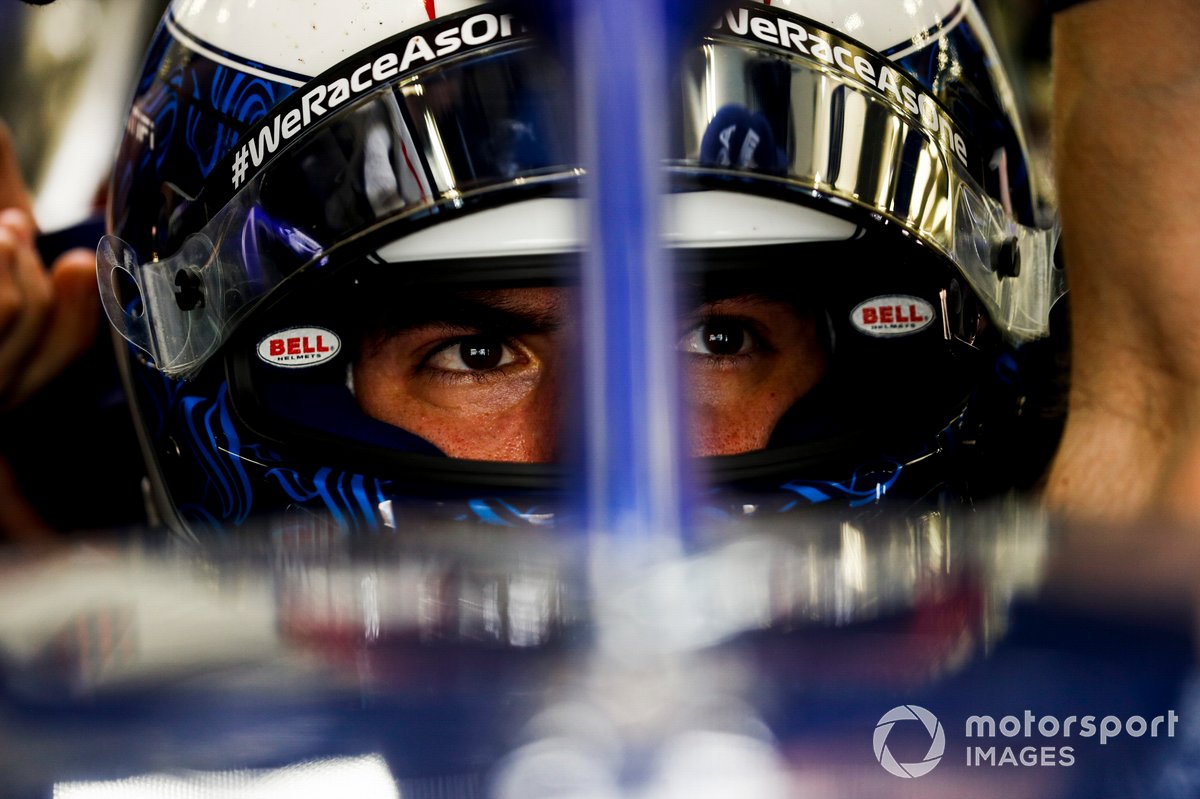 Capito admitted that the negative fallout from Abu Dhabi hadn’t helped his driver.

“What impacted him most last year was the comments and the threats on social media,” he explained. “We helped him to get over that.

In Imola last weekend, Latifi ran behind Albon in the early stages, both having started near the back. The latter was among the first to switch to slicks on the drying track, and Latifi pitted on the following lap with the bulk of the field.

Their tyre changes were only split by a lap, but Albon gained several places and the pair were separated by four cars at the flag. The timing of his stop reflected Latifi’s current situation – he didn’t want to risk going to slicks too early, and potentially make a mistake.

“Obviously, we were quite close to each other on the first stint,” he noted after the flag. “And initially when I came out of the pits, I thought I was going to be ahead of him, because he didn’t seem anywhere in sight.

“I guess the track was clearly ready for the slicks. But just the overall feeling I still have with the car, just lacking the confidence with it, I was definitely not going to want to be the first one to go [to slicks]. I was happy to let other people go first, just to confirm it was fine. In the end, I guess that was quite costly for a lot of track time.

“I just lost out with the later stop. For me, it’s just about the positives of the pace I’ll take from today. Whether you finished P11 or P12, or P18, it makes no difference to us right now.” 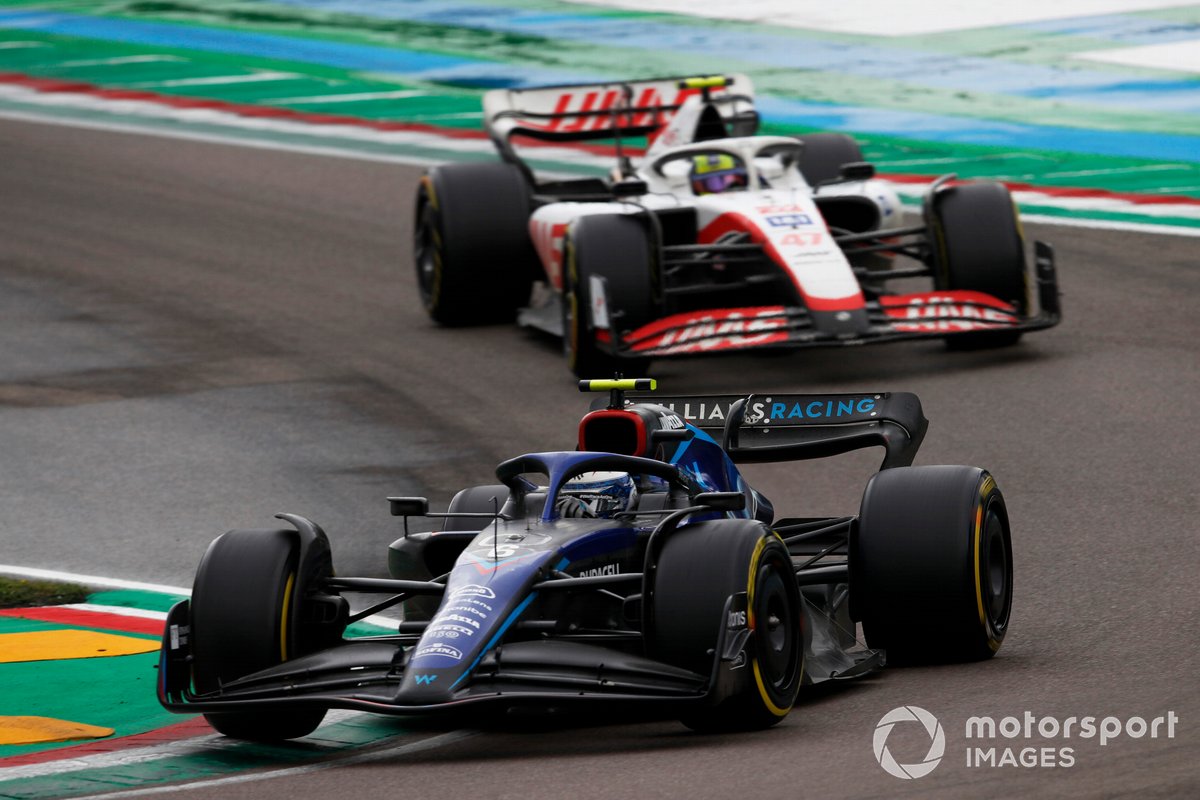 While Albon used an early switch to slicks to vault up the order, Latifi’s more conservative approach left him buried in the pack

It’s rare for an F1 driver to admit that a lack of confidence impacted strategic decision making, never mind that his team mate is doing a better job. However, Latifi is always refreshingly open and honest when discussing any areas in which he needs to improve.

“Since Saudi I just haven’t had a great feeling with the car, even before the crashes,” he notes. “Any driver will say when you don’t trust the car underneath, what it’s going to do, it can be a very dangerous thing.

“I don’t mean in the aspect of safety, I mean in terms of the car catching you out, having incidents, and not being comfortable to push the limits. So even when the pace is relatively okay, or strong, it’s not necessarily that I still have the feeling like ‘Okay, I’m happy with the way I feel’. I think that’s something that will just come with time.”

Latifi concedes that he’s feeling uncomfortable with the car in general, rather than in specific circumstances.

“It’s everywhere,” he said. “As soon as you’re not flat out on the straights, that’s when it starts. Alex is clearly more comfortable with the car.

“Regardless of the pace of the car, we know we’re missing downforce, we know we’re struggling with balance issues. This is clear, but he’s doing a better job in managing it.

“I have to get to that level. And, again, for me, it is just a pure feel and confidence thing with the car, it’s not driving style, [or that] I’m braking too late, not carrying enough speed, this and that.

“If you don’t feel the confidence with the car, you can’t begin to work on the more technical aspects, and that’ll always be the case. So confidence first, and then everything else is secondary, really.” 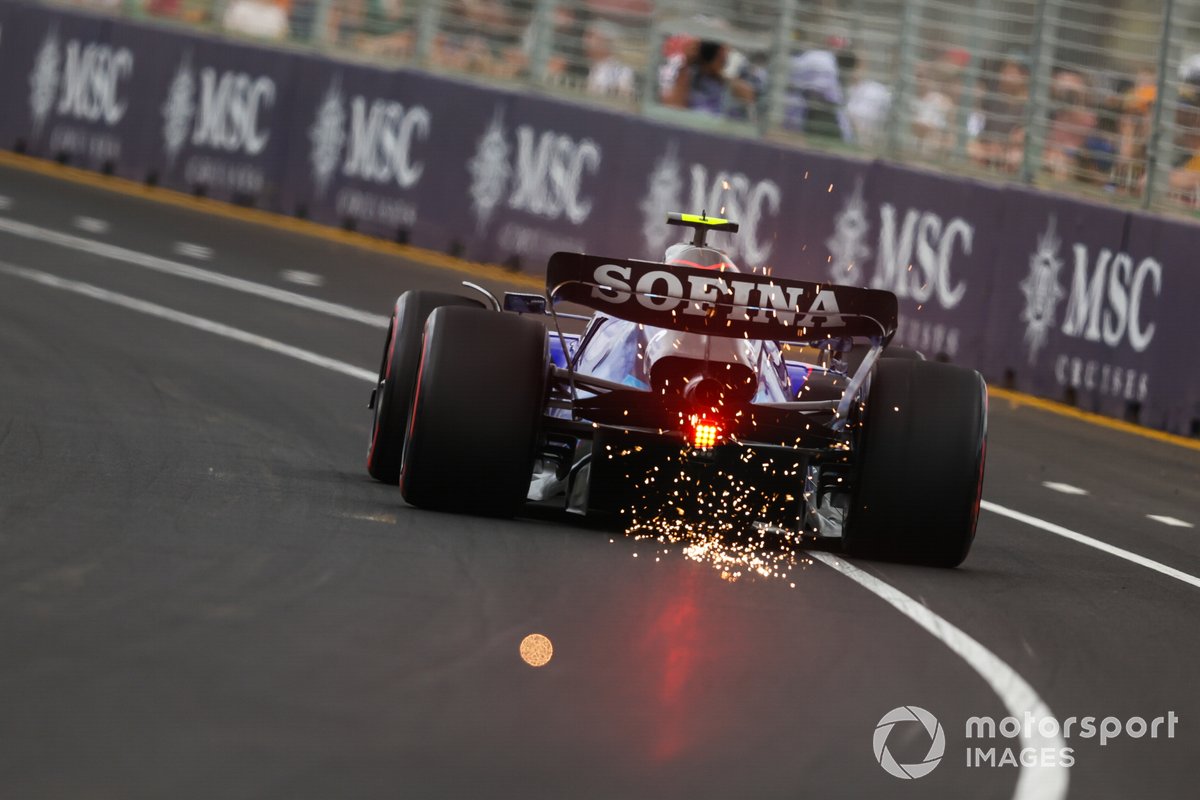 What’s really going wrong for Latifi? Williams head of vehicle performance Dave Robson admits that this year’s cars behave very differently under braking, and that drivers have to adapt to an unfamiliar feel.

“The last few years the rear of the car would have come up a lot,” says Robson. “Which obviously pushes the front wing close to the ground, so that through corner balance as you brake and start to turn in is quite different.

“This car just stays pretty flat, because it’s just low and stiff, and it doesn’t come up so much. I don’t think there’s much you can do about that, aerodynamically that’s just what happens when you run the rear of the car low and stiff.

“So you just need to find other ways, which is a combination of the mechanical set-up of the car, and the driver just needs to learn to some extent. That’s what these cars now do. We could run it high and soft, but it wouldn’t be quick.”

Latifi believes that a more forgiving car will suit him better, and he concedes that it’s a matter of adjusting his approach to suit the FW44 as well as trying to find a set-up that works better for him.

“For sure, it’s going to be a bit of both,” he says. “Obviously, if one driver on the other side of the garage is not happy with the handling of the car, but is at least able to manage it better, you can say that I definitely need to try and get to that level. And that is for sure the case.

“But since Saudi that’s not happening, each lap I do I honestly don’t feel it’s making any progress. There could definitely be some changes to make to maybe bring it a little bit more to me, not in the sense of stabilising the car, because that’s not what we need to do. We did that in Australia, and it didn’t work. 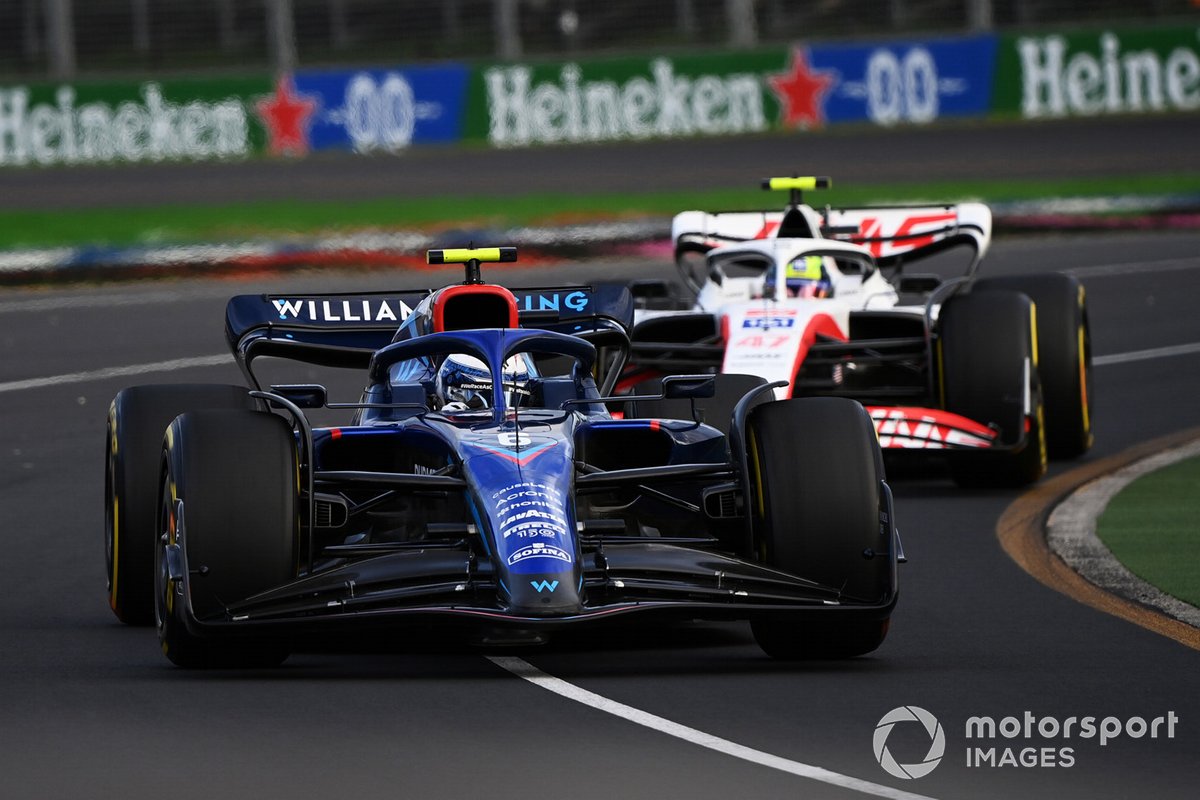 “There are other parameters you can play with, maybe to try and have a more forgiving car. So that’s something to think about, going forward.”

Albon has a different style and approach to Russell, but Latifi doesn’t believe that his new team-mate’s development and set-up choices are making the car any less friendly to him.

“Not at all,” he said. “The baseline car, once we got to Bahrain, it was very clear the weaknesses that we had. And we’re still struggling largely with those limitations every single track we go to, just some tracks to expose it a bit more, some tracks a bit less. But the limitations are still there.

“I’m personally finding it a harder time with this car than I was with the previous two years’ car. Irrespective of relative pace and whatnot. All the cars are slower, that’s a given.

“But the pure feeling I have with the car, its handling tendencies, and how confident I am push it on the limit, even if the balance is not what we want as this team. It’s just still not where it needs to be right now.”

A further challenge for Latifi is the run of barrier-lined street or temporary circuits coming up. Miami, Baku, Monaco and Montreal are all places where confidence is everything and there’s little margin for error. Only Barcelona will provide any real respite from the most challenging year of his F1 career to date.