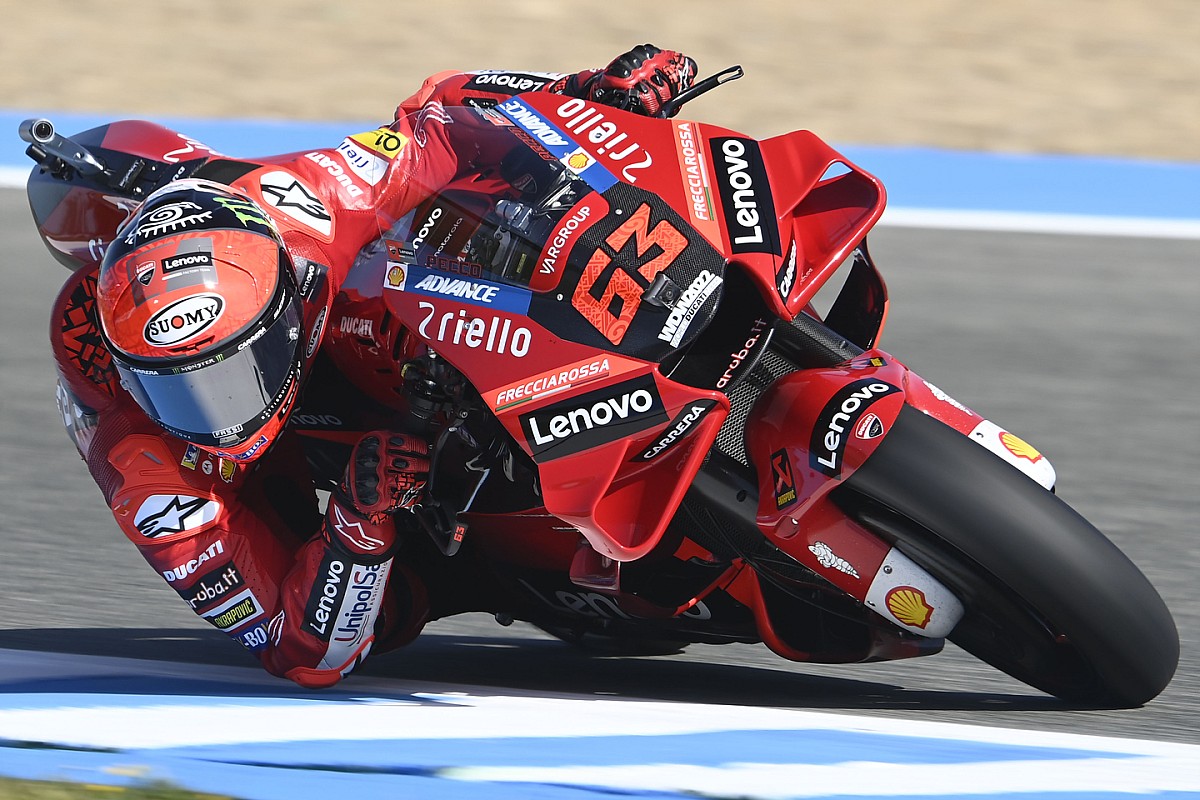 Having traded top spot in FP3 this morning and running 1-2 in FP4, the expected pole battle between Bagnaia and reigning world champion Quartararo raged early on in qualifying.

Suzuki’s Joan Mir set the early benchmark with a 1m37.616s, which he improved to a 1m37.369s as a handful of riders had laps scrubbed for going through a yellow flag zone at Turn 1 for Jorge Martin’s early crash.

With just under nine minutes to go of the 15-minute Q2 shootout, Bagnaia went fastest with a 1m36.863s – only to be immediately deposed by Quartararo with a 1m36.760s.

Such was the pace of both riders, third-placed Aleix Espargaro was almost four tenths off the top two.

On his second time attack run, Bagnaia dug deep to produce a mighty, lap record-smashing 1m36.170s which put him seven tenths clear of Quartararo with just under three minutes remaining.

Quartararo reduced that deficit with his next effort, but was still over four tenths off Bagnaia and had no response for the Ducati rider as the chequered flag came out.

Matching Bagnaia on the first sector on his final lap, Quartararo continued to bleed time over the rest of the tour and had to concede his 100% Jerez MotoGP pole record by 0.453s. 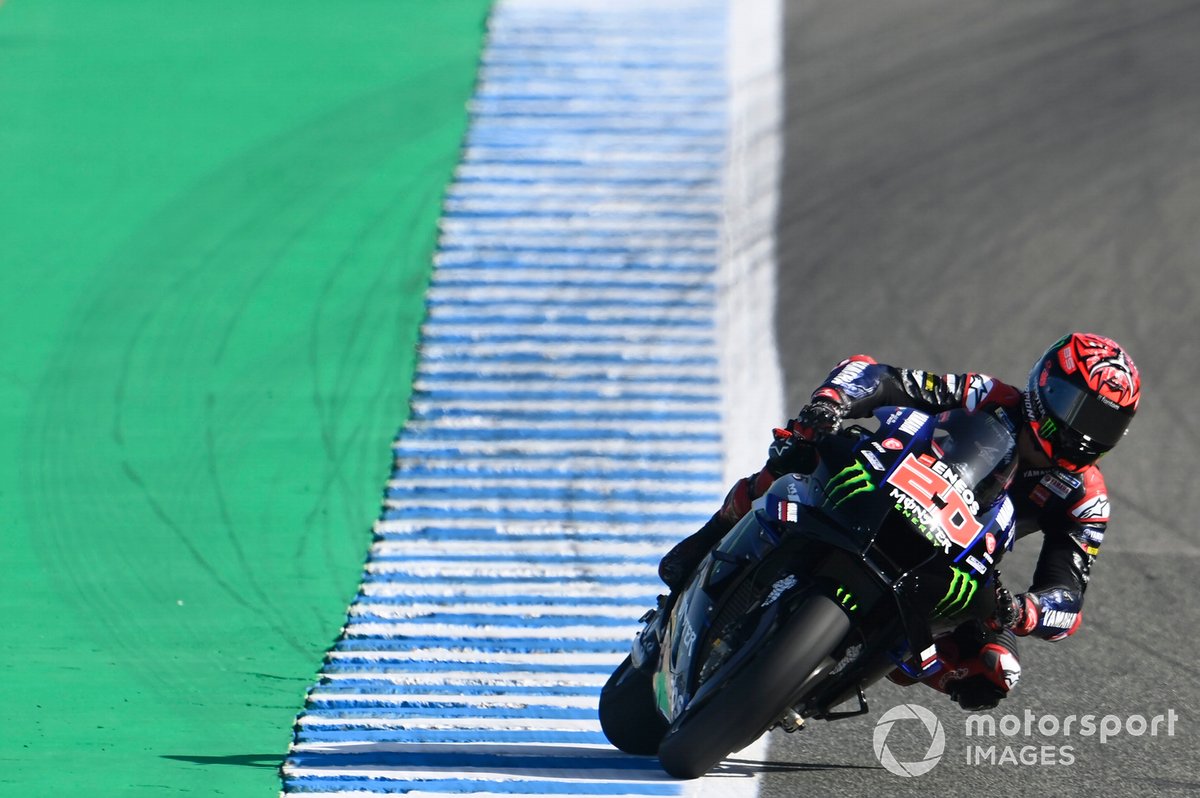 Aprilia’s Aleix Espargaro rounded out the front row for the second-successive weekend, pushing Jack Miller on the sister factory team Ducati back to fourth.

Marc Marquez produced a 1m37.145s lap good enough for a damage-limiting fifth on his troubled Honda, with Pramac’s Johann Zarco coming from Q1 to qualify sixth.

Takaaki Nakagami was seventh on his LCR Honda ahead of VR46 Ducati rookie Marco Bezzecchi – who came through Q1 with Johann Zarco – and Suzuki’s Mir, who crashed late on at Turn 1.

Martin could only manage 10th after his earlier crash, the Pramac rider beating Gresini Ducati’s Enea Bastianini who also took a tumble late on. Aprilia’s Maverick Vinales rounded out the top 12.

Honda’s Pol Espargaro was on course for a place in Q1 having been sat in second as the chequered flag came out.

But a late improvement for Zarco to go top of the session shuffled Espargaro down to 13th ahead of Suzuki’s Alex Rins, who will once again be forced into a recovery ride having come from 23rd to fourth last time out in Portugal.

Brad Binder was the top KTM runner in qualifying in 15th as a drama struck his counterparts. Factory team-mate Miguel Oliveira was kept in pitlane in the first 10 minutes of Q1 due to a technical issue, and could only managed 21st when he finally did make it out on track. 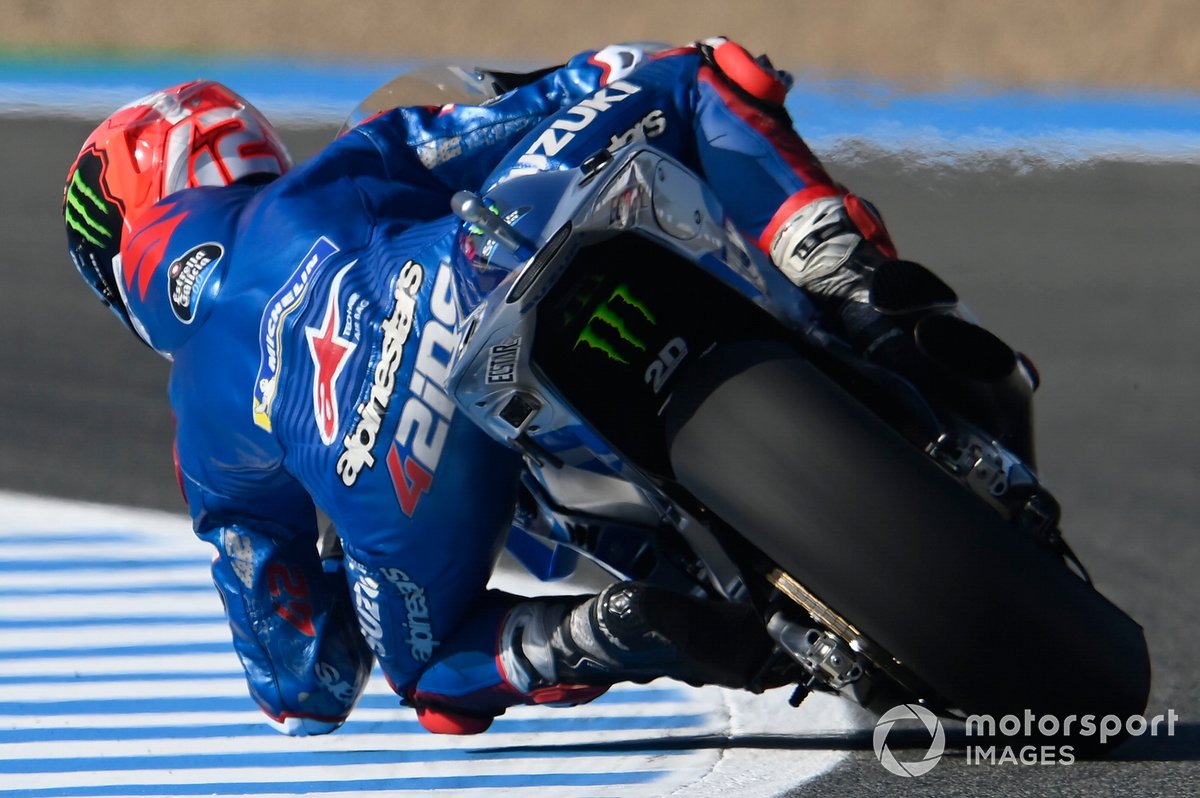 Tech3 KTM rookie Remy Gardner was a few spots ahead in 18th having crashed at Turn 1 in the closing stages of Q1.

Alex Marquez flew well under the radar in 22nd on his LCR Honda ahead of RNF Racing Yamaha’s Andrea Dovizioso, Aprilia wildcard Lorenzo Savadori and the sister RNF bike of Darryn Binder.