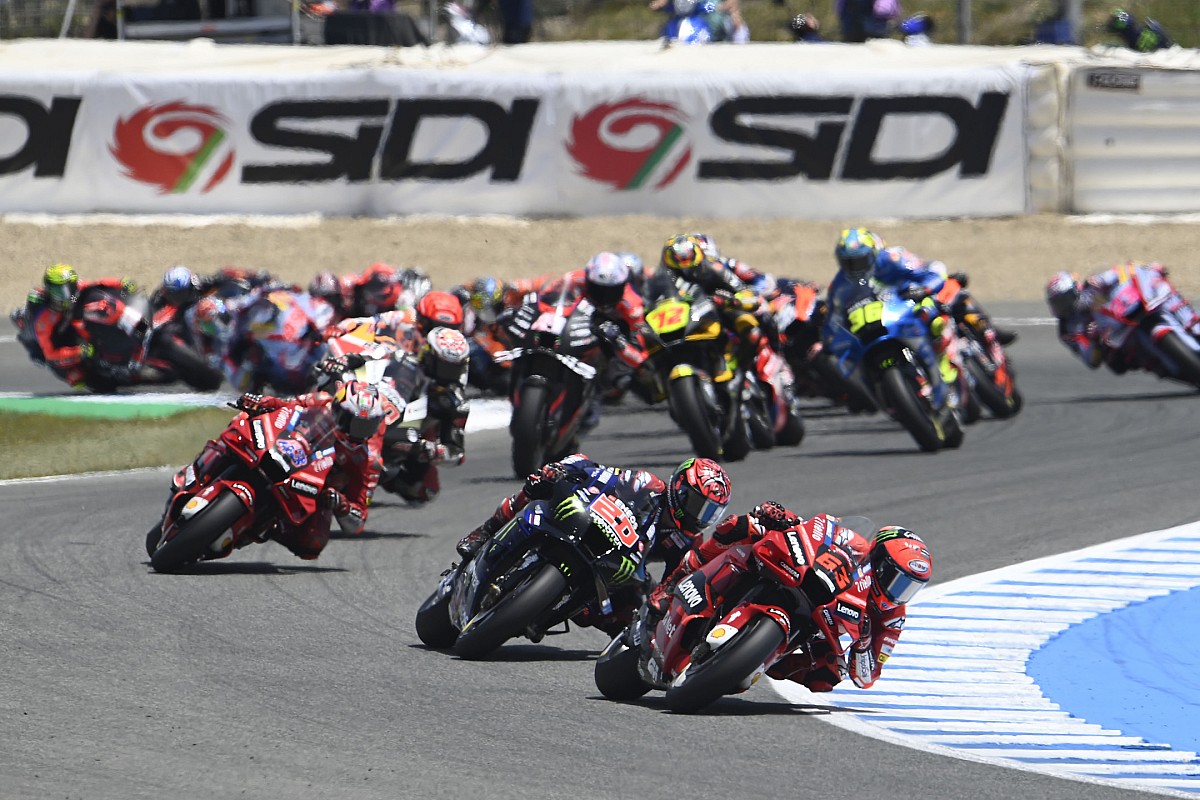 Both Bagnaia and Quartararo have been a cut above the rest all weekend at Jerez, and having qualified 1-2 on the grid the expected duel for victory emerged on Sunday.

Both Bagnaia and Quartararo launched off the line well and drew alongside each other on the run up to Turn 1 at the start of the race.

But it was the Ducati rider who got the advantage, taking the lead from pole as Quartararo slotted in behind ahead of the sister factory Ducati of Jack Miller, the fast-starting LCR Honda of Takaaki Nakagami, Marc Marquez on the factory team Honda and Aleix Espargaro on the Aprilia.

Marquez quickly dispensed of Nakagami into the last corner with an aggressive move that opened the door for Espargaro to come through into fifth, having dropped from third on the grid.

The leading duo ran line astern up front in the early stages as their pace proved far superior to the rest of the field, Miller already around half a second back three laps into the 25-lap contest.

That gap between Quartararo and the chasing pack only swelled as the race went on, as the advantage Bagnaia held in the lead also grew.

Come lap 12, the gap Bagnaia held in the lead was around eight tenths, but would fluctuate between 0.8s and 0.6s. 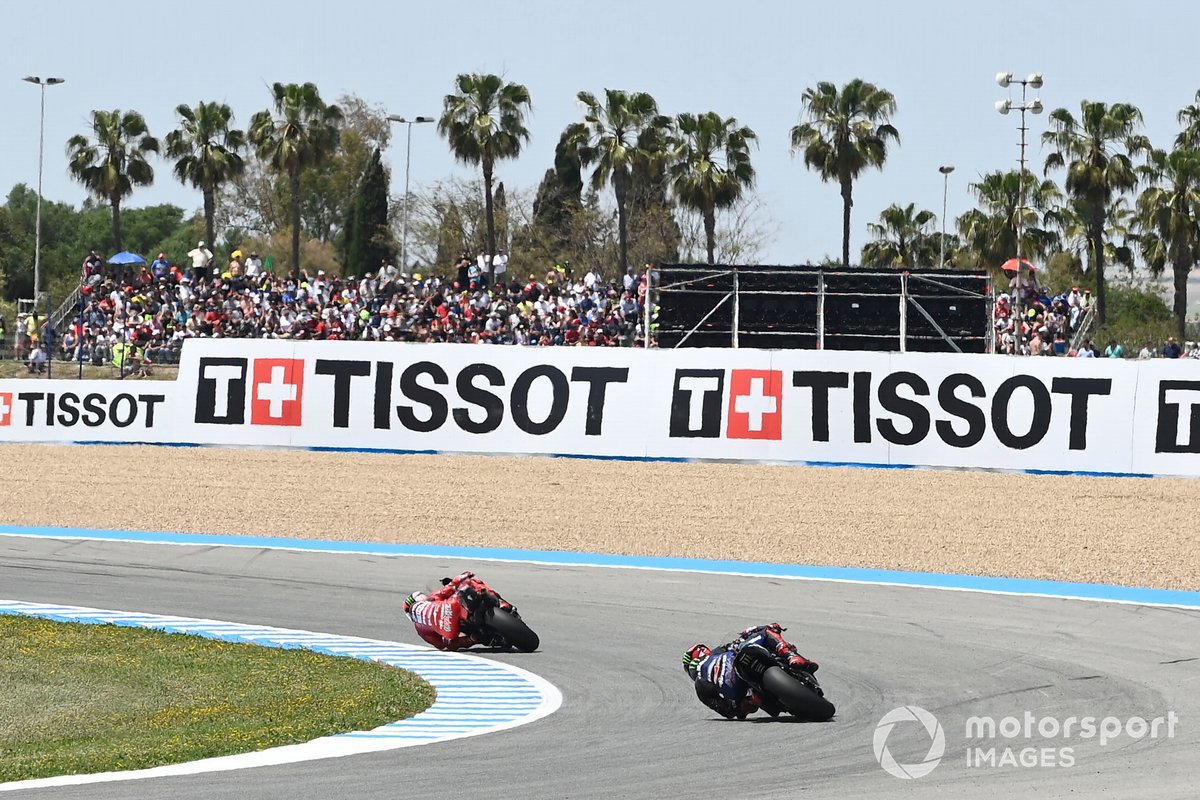 Quartararo got the gap to underneath half a second for the first time since the start of the race on the penultimate tour, and would edge ever closer on the final lap.

But Bagnaia made no mistakes to claim his first win since Valencia last year, beating Quartararo by 0.285 seconds – with the rest of the field almost 11 seconds adrift.

Aleix Espargaro was embroiled in a thrilling battle with Miller and Marquez over third, with that tussle exploding on lap 21.

Having been unable to find a way past the hard-braking Ducati, Marquez finally snatched third away from Miller with a brilliant overtake up the inside of the Turn 5 right-hander.

Marquez then defended the spot on the run into Turn 6, but would have a big moment on the front-end into the final corner and was lucky to stay on his Honda.

This happened at the same time Espargaro snatched fourth from Miller, gifting the Aprilia rider the final podium spot as Marquez recovered from his moment.

But once clear, Espargaro eased away by 1.6s to claim his third podium of the season. Now the winner of four rostrums – including his Argentina victory – Aprilia has now lost its technical concessions. 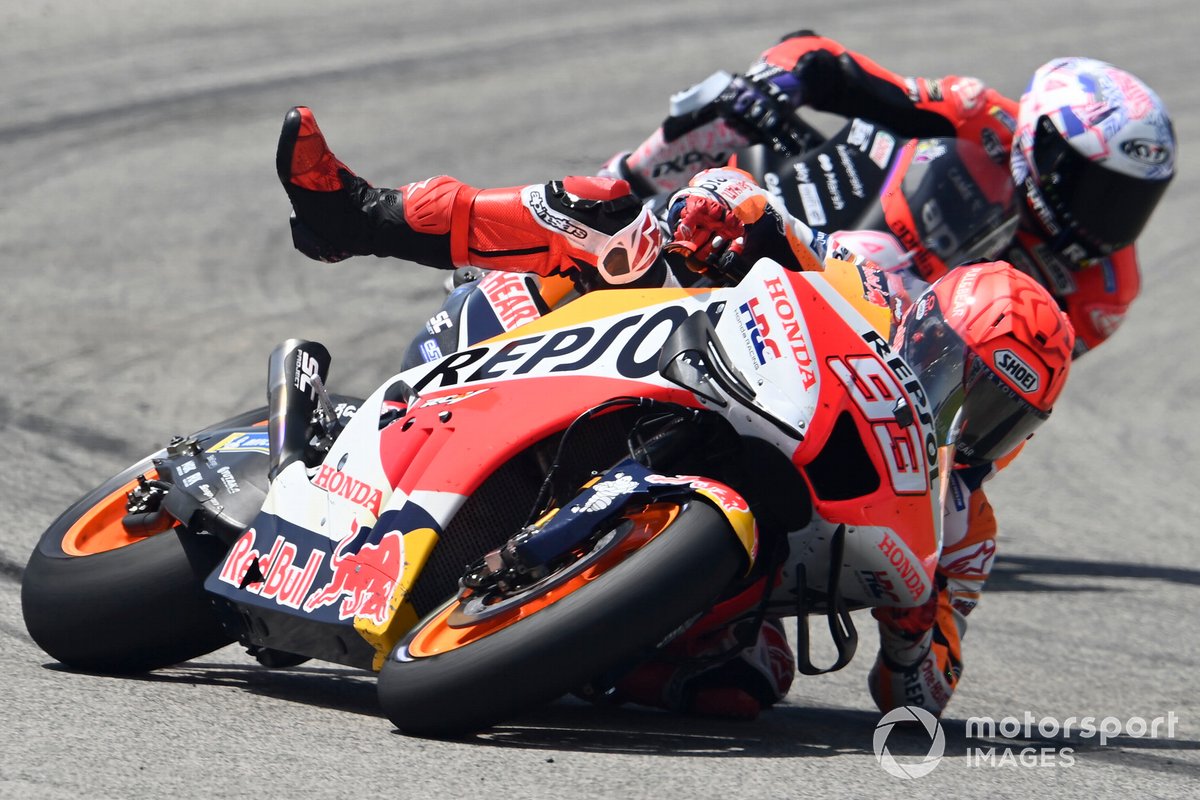 Marquez got the better of Miller on the final lap at Turn 8 to claim his best result of the year in fourth, while Suzuki’s Joan Mir completed the top six having closed in on that podium battle late on.

Nakagami was seventh in the end after his strong start, while Enea Bastianini could only manage eighth on his Gresini Ducati ahead of VR46 Ducati’s Marco Bezzecchi.

Alex Rins’ recovery from 14th on the grid proved disastrous, as the Suzuki rider ran off track on lap nine at Turn 12 and dropped to the back of the pack.

He could only manage 19th at the chequered flag behind Gresini rookie Fabio Di Giannantonio, RNF Racing’s Andrea Dovizioso and VR46’s Luca Marini.

Tech3 rookie Remy Gardner, Aprilia wildcard Lorenzo Savadori and Pramac’s Jorge Martin – who had a crash on lap one – were the last of the classified finishers, with HRC wildcard Stefan Bradl, Pramac’s Johann Zarco and RNF’s Darryn Binder all crashing out.

Quartararo has extended his championship lead to seven points, with Aleix Espargaro moving into second ahead of Bastianini and Rins, with Bagnaia leaping up from 10th to fifth – albeit still 33 points adrift.