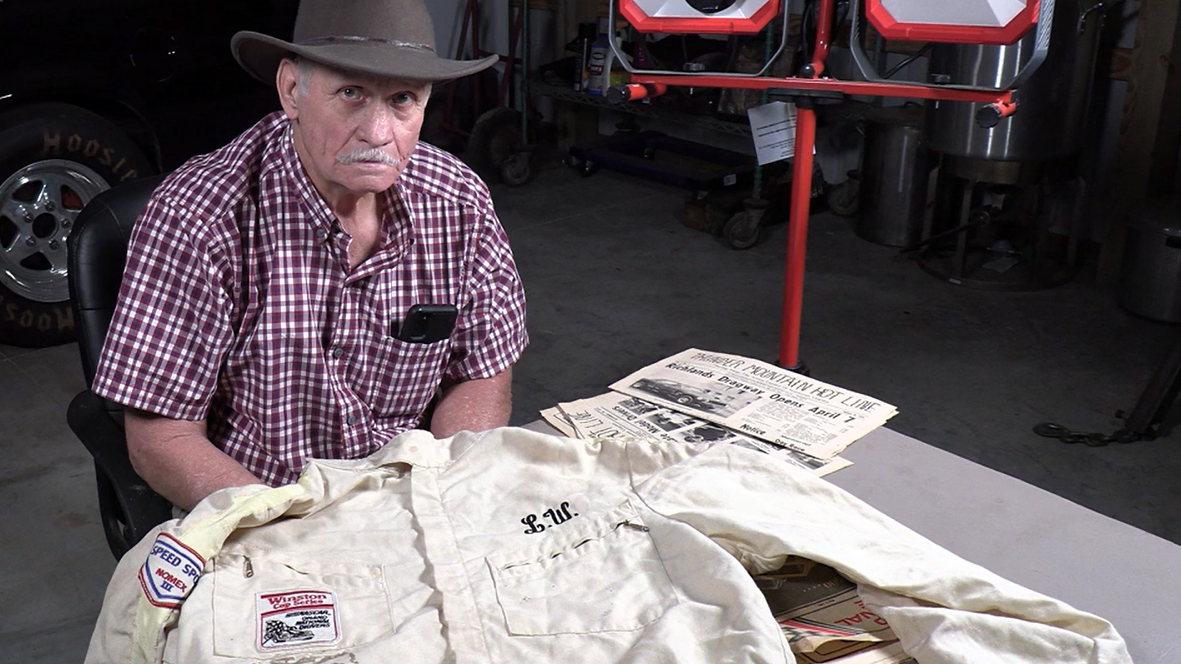 Has NASCAR’s D.B. Cooper been found? Here, at the start of the week when a new NASCAR Hall of Fame class will be announced, a member of the sport’s Hall of Infamy has broken a four-decade silence.

“I said, ‘That straightaway is almost a mile long! How much can that car gain before you go into that turn?’ I said, ‘Lord, I’m down here, but I’m gonna need some help,’ and I didn’t tell nobody else that.”

On this very date 40 years ago, a man named L.W. Wright competed at stock car racing’s highest level on its fastest racetrack, starting 36th and finishing 39th in one of NASCAR’s crown jewel events, the Winston 500 at Talladega Superspeedway. Prior to the race, no one in the Cup Series garage had heard of Wright, but the sanctioning body had for some reason accepted his racing résumé on little more than the word of the Tennessee trucking businessman, and a public relations group that had pitched on his behalf.

As soon as the race ended, he reportedly abandoned the Chevy Monte Carlo he had purchased for the event and disappeared. He has spent the past four decades evading everyone from NASCAR officials to private investigators hired by the people he still owed for that race car to a lot of lawyers and a growing number of would-be amateur auto-racing sleuths, eager to meet the man who somehow conned his way onto a racetrack alongside the likes of Dale Earnhardt, Richard Petty and race winner Darrell Waltrip.

As Tennessee Sports Writers Hall of Fame member Larry Woody wrote later that summer: “If he could have driven as fast as he talked, L.W. Wright would be a NASCAR champion now.”

Over time, Wright’s story has become NASCAR legend, especially in the conspiracy-obsessed corners of the internet. Woody himself revisited the mystery in a story in The Anniston Star two weeks ago. But after years of efforts from journalists to find Wright, he was finally located by another longtime motor sports writer, Rick Houston, who worked at the legendary Grand National Scene and now hosts the NASCAR history-based “The Scene Vault” podcast. Houston spent an entire year searching for, locating and then ultimately persuading Wright to finally tell his story. On an agreed-upon date in mid-April, Houston was ushered to an undisclosed location, where Wright, now 73, was waiting. Houston was understandably skeptical about meeting a man who has worked very diligently for nearly half a century to elude anyone from the NASCAR community. Because of that, the writer was very thorough about positively identifying Wright. Over the years, many have hypothesized that the one-off racer’s name was never actually L.W. Wright. But, armed with a stack of back issues of Grand National Scene and photos from that day in 1982, Houston is positive the man he interviewed is the one in those images. The uniform Wright brought with him for the meeting was also a perfect match, all the way down to the stitching.

“If you can find somebody that said that I owed them $30,000 dollars, you tell them I will face them,” Wright says to Houston, denying any wrongdoing. “I want to see who they are, and I want to know how it come about. If it makes them stutter, then you know what I’m talking about, OK?”

In failing health, Wright seems to want to set the record straight. Skeptics will no doubt wonder if stock car racing’s most infamous con man is to be trusted. There is even confusion about the post-Talladega disappearance. He is listed as a Did Not Qualify at the following weekend’s race in Nashville, but no one recalls seeing him and neighbors reported he had shown up at his house the night after the Talladega event, grabbed some belongings — including some of theirs that he’d already stolen — and drove away, never to be seen again.

Regardless of who said what and what really happened, all will be stunned that Wright has resurfaced.

“I had a lot of friends in country music,” he says on the podcast. “And I didn’t use any of them other than what they wanted to do.”

The story of Wright’s lone race began with, well, that same story. In the spring of 1982, a publicist contacted newspapers in Tennessee, pitching a rags-to-riches racing tale about Wright. He was described a 33-year-old short track racer with 43 starts in NASCAR’s Busch Grand National (now Xfinity) Series who was going to make his Cup Series debut at Talladega with backing from country music superstars he had worked for building buses and trucks for touring, including Waylon Jennings, Merle Haggard and T.G. Sheppard, who was already involved in stock car racing sponsorship. The team was titled Music City Racing. Wright applied for a NASCAR license, costing $115, and also paid the $100 fee to file an entry for the Talladega event.

According to news reports at the time. Wright then convinced Nashville-based Space Age Marketing and its owner, Bernie Terrell, to loan him $30,000 to purchase a race car, $7,500 to cover additional expenses and a big rig truck to haul the car south to Talladega. That car was purchased from local racing hero Coo Coo Marlin and his son Sterling — a future two-time Daytona 500 winner — for $20,700, nearly all of which was paid in cash and the remainder covered via check. Wright wrote a lot of checks, to Goodyear for tires, to other teams for parts, and even spent $168 to have racing jackets made for his crew.

Wright says he asked the Marlins to paint the all-red car black and give it the No. 34. “Because 34 come from Wendell Scott,” Wright explains now, speaking of NASCAR’s first full-time Black racer, who competing during the 1960s and early 1970s. “He was one who already tried to race but didn’t have the means or the money. So, I picked up 34. Plus, I was 34 years old when I started racing.”

Wright tells Houston he also asked Sterling Marlin to come down to oversee his pit stops and race strategy, to educate his new team for the future they planned to have. Marlin, who has always said it was his idea to follow Wright and the car to Talladega, was immediately skeptical.

“Hell, I had never heard of this guy,” Sterling Marlin explained to ESPN in 2019, saying Wright claimed to have won a lot of short track races in Virginia but didn’t seem to know the names of any Virginia racers, including living legend Tommy Houston. “So, I decided I’d go down there with him, kind of be his crew chief, just to keep an eye on him, you know. As soon as we got there, it all got even fishier.”

Marlin says Wright spent the weekend asking questions “that any real racer would have already known the answer to” and that Wright knew the answers to none of them. When the story ran in a Nashville newspaper leading into the Winston 500, T.G. Sheppard’s camp immediately released a statement that he had never heard of L.W. Wright. Wright responded with an apology, explaining that he had prematurely announced the sponsorship. He also said that there had been some confusion about his experience, that he hadn’t actually run 43 Busch Series races, but rather lower-division events that were run at Busch Series racetracks. Still, NASCAR allowed him to make a qualifying run at its largest, fastest track.

“I’d never seen the track,” Wright recalls to Houston about his arrival at the massive 2.66-mile trioval. “I remember pulling into the infield that day and standing at the end of the track and looking down it and I looked over at my brother [a member of the crew] and said, ‘Lord, have mercy. There ain’t no way … you think about holding that car, the pedal flat on the floor, all the way around this track!'”

In a conversation prior to his death in 2010, Jim Hunter, the former NASCAR executive and Talladega Superspeedway president, cited Alabama’s Right to Work laws as “handcuffs” to the sanctioning body’s efforts to keep Wright off the racetrack, located 50 miles east of Birmingham. “Besides,” Hunter said, laughing, “the damn guy did qualify for the race.”

He did indeed, with a speed of 187.37 mph, at the same time that Benny Parsons became the first Cup Series driver to top 200 mph in pole qualifying. But Wright also crashed in practice. Leading up to the 500-mile race, he says he was approached with unsolicited advice from a pair of future NASCAR Hall of Famers. First Bobby Allison said not to feel bad if he didn’t make the field but said, “Well, you’re cocky enough.” Then, according to Wright, Dale Earnhardt spoke to him after practice, advising, “When you get out there you get on the back of someone who’d been here before and follow them, stay with them and then make your move.”

Once the green flag fell, the only move L.W. Wright made was to get out of the way. Unable to maintain the minimum speed of 180 mph, NASCAR ordered him to retire to the garage after 13 laps. He finished 39th of 40 cars, earning $1,545.

And that, according to reports at the time, is when he vanished. The checks he’d written did not vanish. According to Sterling Marlin and all of the investors in Music City Racing interviewed by newspaper reporters of the time, Wright’s checks were returned due to insufficient funds.

Houston worked for a decade at the newspaper known lovingly as simply “Scene,” the weekly publication that was the must-read of the stock car racing industry and fandom alike. Since the paper was shuttered in 2010, Houston has dedicated his career to digitizing back issues as well as interviewing heroes — and now antiheroes — of NASCAR’s past. But he has never had an experience like this one.

“My takeaway from this is that L.W. was seeking to finally get a burden off of his shoulders, to finally get his story out there,” Houston said. “In the grand scheme of things, in the rearview mirror, what he did wasn’t truly all that bad. And I will say that the story we have all heard all these years and the story that he tells us now, they are not the same story. Is there closure? I don’t know. But to sit there and listen to him finally talk about it, to a lot of NASCAR fans, that’s a day we never thought would come.”