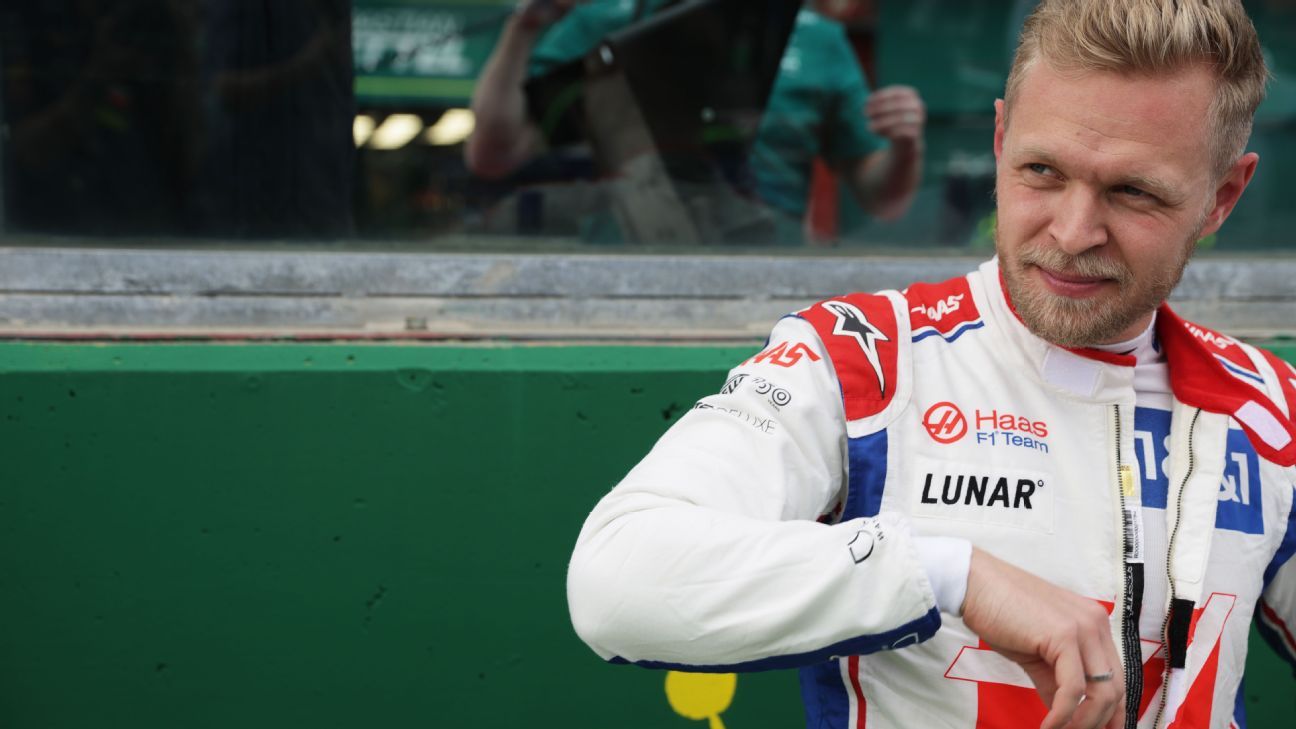 It’s been hard to find Kevin Magnussen without a big smile on his face since he made his sensational return to Formula One in March.

The story of his comeback has been well told now. He was preparing for a family holiday in Miami with wife Louise and baby daughter Laura, having given up any lingering hope of racing in F1 again, when old boss Guenther Steiner called him about replacing ousted Russian driver Nikita Mazepin at Haas for the new season.

Magnussen, 29, is back in Miami this week as a Formula One driver, having accepted Steiner’s offer, although not before convincing a sceptical Louise that it was the right thing to do. A big part of her concern came down to their new role as parents and whether F1’s gruelling 23-race schedule would fit into that.

Magnussen’s return has added to the small collection of fathers on the grid, with Sebastian Vettel and Sergio Perez alone in that category before. Ahead of the Bahrain Grand Prix Magnussen and his wife created one of the feel-good moments in F1’s recent history when they proudly watched Laura playing in the cockpit of his Haas.

The Magnussen of this stint — he raced for McLaren in 2014, and then Renault and Haas between 2016 and 2020 — is noticeably different to the one we saw previously. He’s still as talented, but he is calmer and more relaxed away from the race track. While he puts some of that down to gratitude at an opportunity he never thought he would get again, a lot of it comes to down to a shift in perspective.

“Becoming a dad suddenly changes you in the way that someone is now more important than you,” Magnussen told ESPN ahead of the Miami Grand Prix (May 8, 3.25PM ET ABC, Full Schedule). “When you’re a Formula One driver, and I guess any top sports person, you grew up in this world where everything is centred around you.

“The focus is just on you all the time, just yourself, no-one else. Suddenly, becoming a dad there’s this other person that is just more important.”

He laughs, adding: “You’re not even second most important anymore,” raising his hand high and then dropping it down low. “You’re down here!”

While racing drivers will all tell you that all the noise around them — the media questions, the speculation about their future — all goes away once they are in the car with the visor down, away from the car those things can be draining mentally, especially for younger drivers. Magnussen found this to be the case in his previous stint in Formula One, where it felt like he was in a constant fight for recognition as he forged a reputation as a scrappy racer getting the best out of uncompetitive cars.

Since returning this time, Magnussen has found those same worries are no longer there.

“[Being a father] changes everything a little bit. It opened my eyes to what life is like outside of F1.

“It also a new [feeling]… when I’m in the paddock or about to get in the car, it doesn’t feel as important somehow. Not that it’s not important to me, it’s super important, but it’s not as… scary, in a way.

“Before I had a lot of fear being in F1. Fear of losing my seat, not performing, like, what’s gonna happen to me if I’m not in a Formula One job anymore? Because if I don’t do well today, I’m out.

“All of that has changed. It’s more easy, more relaxed.”

For any racing parent, an inevitable question follows any mention of their children — are they going to follow in your footsteps? Motor racing is full of drivers following in the footsteps of racing relatives (Magnussen’s teammate is Mick Schumacher, son of seven-time world champion Michael).

While it might seem like a premature question to ask about Magnussen’s baby daughter, for a lot of second generation drivers they start racing as soon as they’re able to walk. Magnussen, son of former F1 driver Jan, was given a go-kart for his first birthday. He can’t remember his first race, just that the only constant in his life has been racing in some form.

Kimi Raikkonen, who retired at the end of last year, often shares photos of his son Robin and daughter Rianna driving their karts.

“I want to be very careful of pushing her into it,” Magnussen said about the prospect of doing the same for Laura. “I want to keep her away from it… but I’m happy with whatever she wants to do. I’ll be supporting her no matter what.

“It would be funny if she came into racing because we would get to drive go-karts and stuff together. But it’s not like I have some hope or ambition that she follows in her dad’s footsteps, she can do whatever she wants to do.”

If it had been purely down to talent, Magnussen would have never left F1 in the first place.

When he and former teammate Romain Grosjean left in 2020 Haas opted for youth and finances, replacing them with Mick Schumacher and Russian driver Nikita Mazepin, who was funded by his father’s company Uralkali. When that sponsorship deal fell apart on the eve of the season following Russia’s invasion of Ukraine and the Dmitry Mazepin’s close links to the Kremlin, Magnussen got the call.

Mazepin was never competitive for Haas in what was its worse season in F1.

When asked if it made him feel better knowing he could have done a better job than Mazepin, Magnussen said: “I didn’t really think of it like that. I didn’t feel any pity. Is that the right word? Yeah. “None of those thoughts. When I was out, I didn’t really look back. I was too busy having fun and living life.”

Magnussen understood what Haas had been trying to do with the Mazepin money and why they originally had to move on, with the team’s 2022 car largely a by-product of the team writing off last season at the earliest possible opportunity.

“I watched it from the outside. I realised what the plan was fast, you know, they did that, abandoned that project to focus on this project, on this car.

“So it made sense to me that they were struggling. I didn’t think that [finishing last in 2021] was their level.

“I think they made the right choice because they fell behind in 19 and 20 and then went all out to jumpstart this project. So that was part of the reason why I was so excited to come back when I got the chance because I knew all the focus had gone towards this car.”